A video showing the successful treatment of trees infected by the Emerald Ash Borer, an insect whose larvae damages ash trees by tunneling beneath the bark into the conductive tissue, is available at www.TreeResearch.org.

Hosted by Dr. Dave Roberts, a specialist and district horticulture agent with Michigan State University Extension and the first to identify the EAB in 2002, the video came about due to what Roberts says was inaccurate news on managing the EAB. Reports were made that certain methods could eradicate the EAB, but all efforts failed.

“Many of us in the industry wanted the American public to know the truth – that the EAB is forever a part of the North American landscape, but we can manage the EAB on specific trees,” Roberts says.

The video details signs and diagnosis of the disease as well as offers an overview of chemicals and fertilizers used to treat infected Ash trees.

Roberts says symptoms of infected trees can be seen initially as a yellowing of foliage on branches, which is followed by leaf loss and dead branches. Serpentine tunneling and D-shaped emergence holes from the larvae can be seen beneath the bark.

“Depending on the EAB population in the area, the tree may die within one to five years,” Roberts says.

Woodpeckers are also an indication that trees are infected. Roberts says the birds “extract larvae from beneath the bark, leaving a jagged hole and whitish areas on the tree.”

“They are probably our best biological control, sometimes extracting more than 50 percent of the larvae from some trees,” he says.

The video shows the most effective treatment of the disease is annual applications of Imidacloprid for areas with heavy infestations and in the curative stages and use every other year for preventive situations. The best method is trunk injections that do not involve drilling because the holes damage the tree’s ability to move nutrients. The pesticide used in the video is Pointer from ArborSystems, which is labeled by the EPA for two-year control. Other fertilizers and root stimulants were used as well.

The 24-minute video shows that Ash trees can be saved rather than destroyed. For more information, visit www.TreeResearch.org, where a short version of the film is available for download. More information, articles and photos of the EAB and damaged trees are available on Dr. Roberts’ site at www.anr.msu.edu/robertsd/. 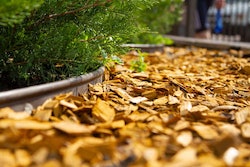