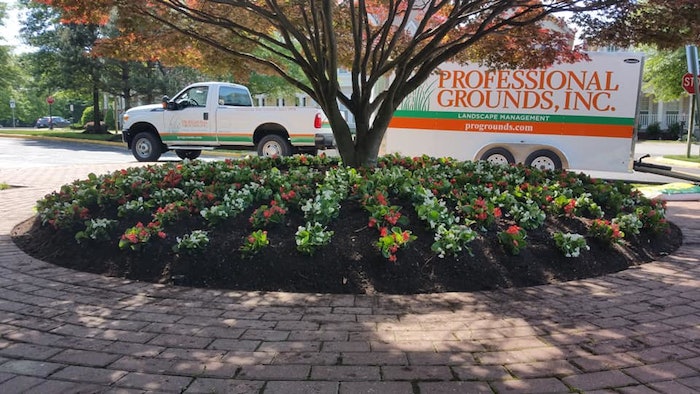 For more than four decades, Professional Grounds Inc., in Lorton, Virginia, had been having mulch delivered to their headquarters and then brought to individual sites 10 yards at a time. But company president Timothy Trimmer says that even though it’s the way “things were always done,” it was becoming increasingly apparent just how inefficient it was. With some larger properties needing as much as 200 yards, it would take 20 trips or multiple vehicles to do. That’s what drove Trimmer to come up with the idea of staging sites. The result has been time, money, and fuel savings.

Staging sites are common for large-scale landscaping operations like snow removal—where multiple vehicles will need to go out from one central location. But it’s not something that Trimmer had ever considered for mulching before. However, in brainstorming a way that he could cut down on driving time and increase efficiency, he decided staging made a lot of sense.

“So many of our clients are HOAs and already allow us to have mulch delivered to a spot on their property,” Trimmer says. “So, instead of just having the mulch for that single site delivered, we would do all of the surrounding properties on that same day.”

This formula is repeated throughout the mulching season with a staging site being used at one location for multiple properties.

Trimmer says the one potential downfall to this plan would be if the HOAs that were being used as staging sites were unhappy. So, instead of using just one crew to mulch as the company had done in the past, Trimmer says they use up to 10 crews for each staging site.

“The result has been that we can move the mulch really fast and since we’re so much closer to the surrounding sites, we’re using a lot less fuel,” Trimmer explains.

In fact, drive times were reduced by as much as an hour round trip with this new plan. The fuel savings have been significant. Plus, with the previous operation, bagged mulch often had to be used to prevent so much back and forth from headquarters. Now, the company can solely rely on bulk mulch—which saves them a lot of money.

Between time, fuel, and mulch cost, Trimmer estimates they may have saved as much as $100,000 with this new arrangement.

An unexpected benefit of the new mulching operations has been better quality control.

“Previously, we were sending crews out all over the place and we couldn’t keep as close an eye on quality,” Trimmer says. “Now, we’re working on one concentrated area at a time. We’ve found that’s made a big difference in managing quality control.”

Crews are happier, too, Trimmer adds. It’s easier for them to work from a single staged location that’s close to the job sites they're working on than to run back and forth from headquarters, which might be a lot further away.

“It goes to show how re-evaluating operations regularly is important,” Trimmer sums up. “This was a simple change that made a big difference for our company.”