Landscape designers, architects and contractors share a common appreciation for the natural world and the creative ways it can be shaped to suit our needs and desires. But, there are many, many ways to do it, as is evident when considering the following industry professionals who represent diverse landscape design, installation and maintenance backgrounds.

W.Gary Smith uses his artistic abilitiy— above, in a rendering of his ASLA award-winning design for Peirce’s Woods— to help clients “find new ways to see things.”

What makes these individuals interesting is that they carved niches with the force of their personalities and principles and chose to do things a different way—even when it didn’t make much sense to anyone else at the time. Some had formal business training; others learned strictly by the seat of their pants. More often than not, there were lean years. Sometimes, simply not acknowledging they could fail was their greatest business asset. But each has persevered and become a pioneer and positive force in the landscaping industry.

If you’re pondering your professional goals and looking for ways to grow your business or creative inspiration, there’s something to learn from each of these entrepreneurs who turned passion into reality.

Long before “native plants” was a common term in landscaping, Neil Diboll was preaching the merits of indigenous species. He credits his parents for his calling in life. “We grew up camping, backpacking and taking wildflower and nature walks,” he says. “I was exposed to the beauties of the earth from a young age. And they always encouraged us to follow our hearts.”

Sometimes, simply not acknowledging they could fail was their greatest business asset.

Praries Nursery designed the seed mix for this installation at a Wisconsin Promega technology center.

While at school at the University of Wisconsin, Diboll fell in love with the prairie and its amazing diversity and productive ability. After graduating in 1978 with a degree in environmental science, he worked for the park service in Virginia and Colorado before securing a job at his alma mater’s arboretum. On weekends, he educated himself on prairie ecology by reading articles on prairie root structure, soils and management.

When the recession of the early 1980s hit, Diboll couldn’t find a job, so he decided to start his own business. He says his motto was: “I got no business being in business.” He had no business background and no capital, so he borrowed from family and friends to buy a Wisconsin nursery from Bob Smith, who had been collecting native plant seeds since 1965.

Diboll and a buddy lived on the half-acre property, driving around to collect seeds along roadsides. “You can imagine how two guys living in a trailer growing wildflowers were received,” Diboll jokes. They eked out an existence, barely making enough to support themselves the first few years. By sheer determination, Diboll hung on. “Quite simply, I owed too much to my family and friends to quit,” he says.

Sales slowly increased. In 1987, Diboll bought a truck, trailer and seeder and began landscaping installations for individuals, city parks and golf courses. Word spread through clients and the occasional trade show. In 1988, Diboll was asked to lecture on native plants at the National Arboretum, a turning point in recognition of his efforts. The original Prairie Nursery is now 200 acres of seed production, propagation, greenhouses, display gardens and online retail sales. The nursery ships seeds and plants, designs and installs prairies, and advises homeowners, parks and businesses on prairie restoration. Diboll is also co-authoring a gardening guide on prairie plants to be released next year.

Diboll admits it’s a challenge to convert one’s passion into an economically viable entity. His tenets for success are simple: Don’t overspend, reward your employees and be resilient. Most importantly, “if you truly believe in something and stick with it long enough, you’ll find a way to make it work.”

Growing up in the family landscaping business, Kurt Bland and his brother, Matt, were never pushed to be part of it. But it was a natural fit for Kurt, an avid outdoorsman who studied horticulture in college. After gaining management experience elsewhere, Kurt came home, becoming general manager for the firm in 2004, with Matt joining as controller.

What started when their dad, Tom, took over a bankrupt landscaping company in 1975 is now an award-winning commercial grounds management, residential design/build and landscape installation firm. Kurt Bland is passionate about what he does, especially about finding alternatives to standard industry practices. “I have a lot of pride in this industry, but I’ve seen wasteful practices that bother me,” he says.

Since 2005, the firm has used numerous measures to reduce its environmental impact and costs, including recycling all oil, contaminated fuel, green, paper and metal waste. They run B20 bio-diesel, sourced in North Carolina, in off-road and diesel engines. All handheld small engine equipment is now cleaner-burning hybrid four-mix engines instead of two-cycle engines.

Water management is another focus. When Bland first returned, the region experienced several years of drought. “I realized that if I could not protect our customers’ investments, they weren’t going to be spending money with us on things like annual flower beds,” Bland says.

After studying their options, the firm drilled wells and built a 16,000-gallon cistern to capture water from their office roof. “We needed to have more control over our source of water,” Bland says. Though it’s not the company’s sole source, it adds up: One inch of rain yields 3,000 gallons from the roof. It’s also taught them the principles of rainwater harvesting, a service now offered to clients.

People are another valued company asset, with the firm employing about 185 people during peak season. “I respect my manager’s opinions tremendously,” Bland says. That regard is reflected in the fact that people stay. The average tenure for managers is 12 to 15 years. Annual volunteer projects such as establishing learning gardens at local schools are also a part of the company’s culture.

The firm uses numerous measures to reduce its environmental impact and costs.

Despite the recent economic challenges, the company has not lost money in its 35-year history. “We’ve had to make difficult decisions in recent years, such as shutting down our commercial construction division, which originally put us on the map,” Bland says. “But you survive a changing world by being flexible. A rigid point of view isn’t going to work these days.”

Although it’s difficult to pinpoint when Patricia O’Donnell’s appreciation for historic preservation first emerged, her childhood undoubtedly had an impact. “I grew up in Buffalo, New York, a city with an incredible legacy in its neighborhoods and parks,” O’Donnell says. “The neighborhoods had mature elms. I gardened with my family. I visited the parks. It all became part of who I am.”

Heritage Landscapes did extensive research to create restoration plans for the gardens at Longue Vue House and Gardens, New Orleans.

As a young mother, O’Donnell ran the volunteer group that rebuilt the Delaware Park rose garden in Buffalo, later worked with the Youth Conservation Corps, and went back to school. She finished a degree in environmental design before heading to the University of Illinois for master’s degrees in landscape architecture and urban planning.

When O’Donnell graduated in 1981, she secured work with Anthony Walmsley in New York City, becoming project manager for Prospect Park and other major projects in the Northeast. O’Donnell steadily built her credentials and her portfolio. In 1987, she founded her own firm. “I was committed to working in places we already cherish,” she says.

During the past 24 years, O’Donnell’s driving force has been protecting heritage landmarks and cultural landscapes. She has worked on more than 400 projects as diverse as the Virginia State Capitol, historic parks and parkways in Baltimore, Rochester, Louisville and Pittsburgh, and historic sites such as Valley Forge, Yorktown and the Lincoln Home.

O’Donnell says one of the ways she built her reputation was by volunteering through committees and professional groups such as the American Society of Landscape Architects, where she urged the organization to do more in the field of historic preservation. “Professional volunteer work has been a cornerstone of my career,” she says. “If you’re not actively engaged in professional dialogue, you’re not moving forward.”

Another key factor in her success is her belief that clients are full partners in projects. “I’ve avoided an ‘us versus them’ mentality,” she says. “We team with our clients. It makes a difference in how you’re perceived in the marketplace.”

Heritage Landscapes has been involved with hundreds of restoration projects, such as the gardens at Vizcaya Museum and Gardens in Miami, Florida.

O’Donnell, who holds landscape architectural licenses in multiple states, believes in continuing education. “Get your certification in whatever it is you do, whether it’s integrated pest management or landscape architecture. Educate yourself, formally and informally. It’s the only way to stay vital in our global society.”

When Gary Smith joined the Greenhouse Club in eighth grade, he was smitten. “I loved the beauty of the plants,” he says. “My places of refuge as a teenager became the greenhouse and the art room.” When it came time for college, Smith took the practical route, pursuing a degree in ornamental horticulture and taking electives in fine arts. But he never stopped painting and drawing.

After earning a graduate degree in ecological design, Smith went to Philadelphia where he gained experience at large urban design firms, such as OLIN, on a variety of landscape projects including Riverside Park in New York City. In 1989, Smith started his own firm. “The driving force was to focus on fine gardens rather than on large-scale urban planning,” he says.

Top: Smith created a colorful landscape to frame the Faerie Cottage at Winterthur garden in Wilmington, Deleware. Above: Longwood Garden’s Carpinus Walk is nestled among masses of Florida flame azaleas.

During the years, Smith’s des,igns have included gardens such as the new Santa fe Botanical Garden, the Children’s Garden at the Lady Bird Johnson Wildflower Center in Austin, Longwood Gardens and Winterthur. He taught landscape design at the University of Delaware, lectures at botanic gardens and offers workshops at professional conferences.

Smith’s passion is blending the practical and the sublime. “Much of landscape design and architecture is about relating to the environment and protecting the earth,” Smith says. “But what dosen’t get talked about these days is the beauty and joy we feel in nature.

Design should be both an expression of landscape ecology and an art form.”

Smith also believes art makes a better designer; his book, From Art to Landscape: Unleashing Creativity in Garden Design is an American Horticultural Society Book Award winner for 2011. “Design solves problems, such as how to handle a specific site issue like drainage. Art raises questions and creates new ways of seeing something,” Smith says. “It’s important to handle the drainage well, of course, but that’s not what people comment on when they see a garden that moves them.”

Visiting gardens of all sizes and continuing to study outside his primary fields of interest are ways Smith finds ongoing design inspiration. “One of the best design courses I ever took was in flower arranging,” he says. 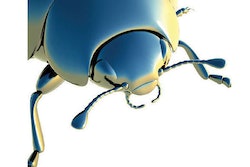 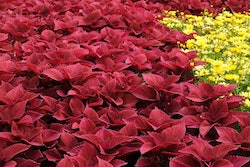 Plant Trends You Can Grow With 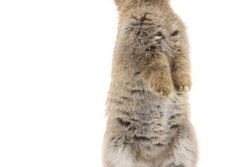 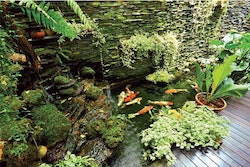 How to create profitable koi ponds