Characterized by rock formations that mimic water and other natural features, karesansui (dry landscape) is the epitome of a Japanese garden. These stone gardens, also known as Zen gardens outside Japan, have a rich history dating back to the 12th century.

However, today’s stone gardens aren’t just static copies of traditional landscape architecture, but rather a constantly evolving expression of Zen thought, found everywhere from ancient temple grounds to modern yards. Learn more about the origins of these tranquil, thought-provoking gardens and inspire your customers who want to have their own.

The oldest known description of stone gardens is found in the Sakuteiki, or Records of Garden Making, written in the late Heian period (11th century). It reads, “A garden of arranged stones that has neither a pond nor a stream shall be called a dry landscape garden, one that expresses a water-filled natural landscape without the actual presence of water.”

We don’t know exactly what this kind of garden looked like, since the ones from the period no longer exist. However, later Japanese gardening practices were heavily influenced by Zen philosophy, which was not yet widespread in Japan when the Sakuteiki was written. So the gardens it describes may have been somewhat different from their later incarnations. Still, it’s clear that the key feature of a stone garden — evoking water in a dry landscape — existed. Two factors influenced their evolution into their modern forms. 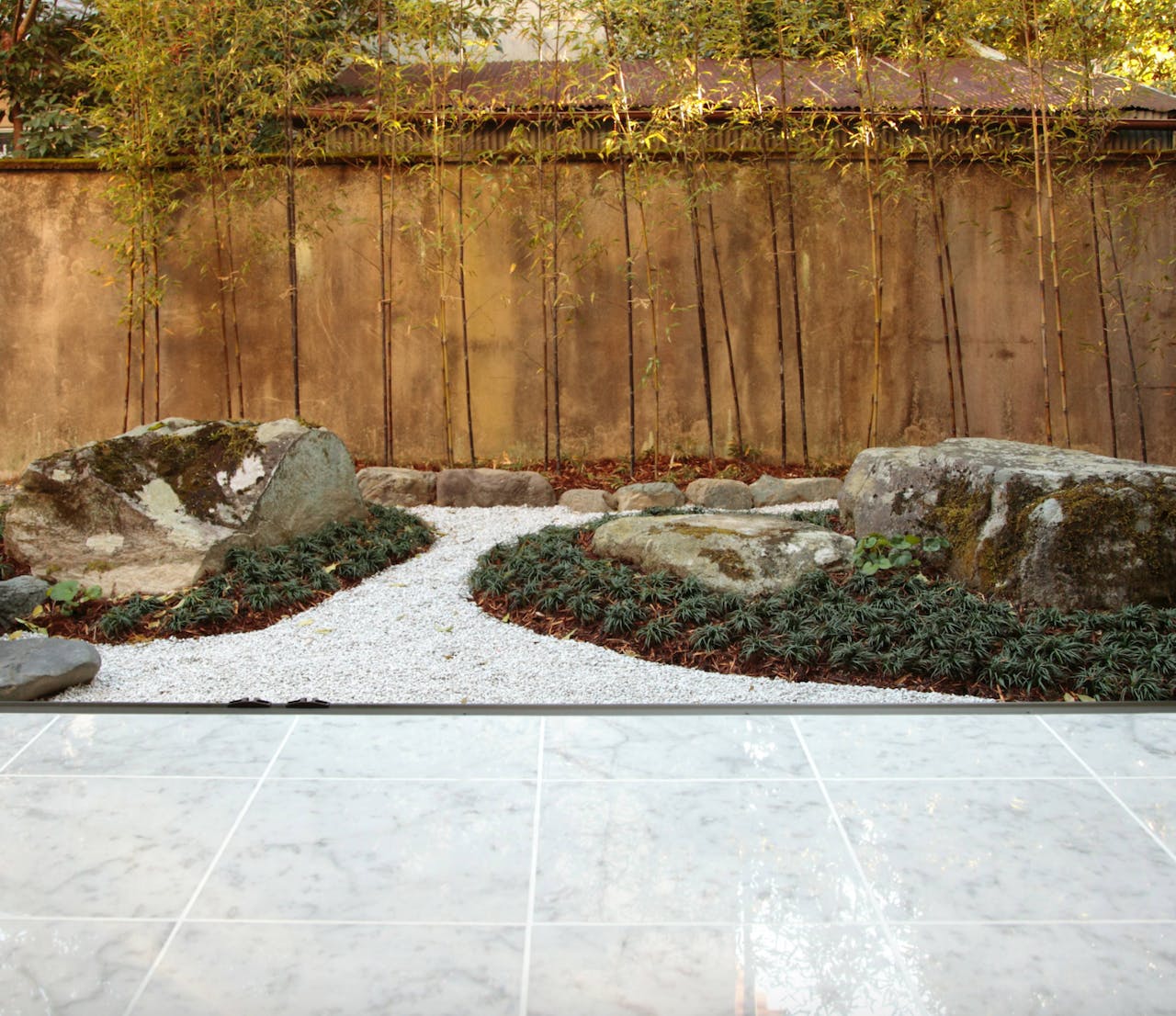 1. Zen teachings. The first factor was the spread of Zen thought throughout Japan. This school of Buddhism came from China and flourished in Japan from the Kamakura period to the Edo period (late 12th century to early 16th century).

The first full-fledged stone garden was created in Kyoto’s Saihoji Zen temple by Muso Soseki (1275-1351), whose work holds an important place in the history of Japanese gardening. The gardener-monk was summoned to reconstruct the nearly forsaken Saihoji — formerly dedicated to another school of Buddhism, Pure Land Buddhism — as a Zen temple. The reconstruction entailed numerous changes, including modifications to the garden. He decided to create a stone garden as a place for monks to practice Zen. Rocks hold a special place in Zen thought as expressions of the force of nature, and one practice involves the contemplation of rocks as a way of becoming aware of that which is invisible.

2. Art forms. The second factor that led to the development of the modern-day stone garden was the influence of the bonkei and sansuiga art forms. Bonkei (tray scenery) is the practice of arranging sand, stones and miniature plants on a tray to create a miniature replica of natural scenery; it is from bonkei that the famous Japanese bonsai tradition evolved. Such trays were displayed at celebrations as decoration for the interior of a house. Sansuiga is a style of landscape painting that was popular among Zen priests. Both art forms influenced the aesthetics and composition of stone gardens. 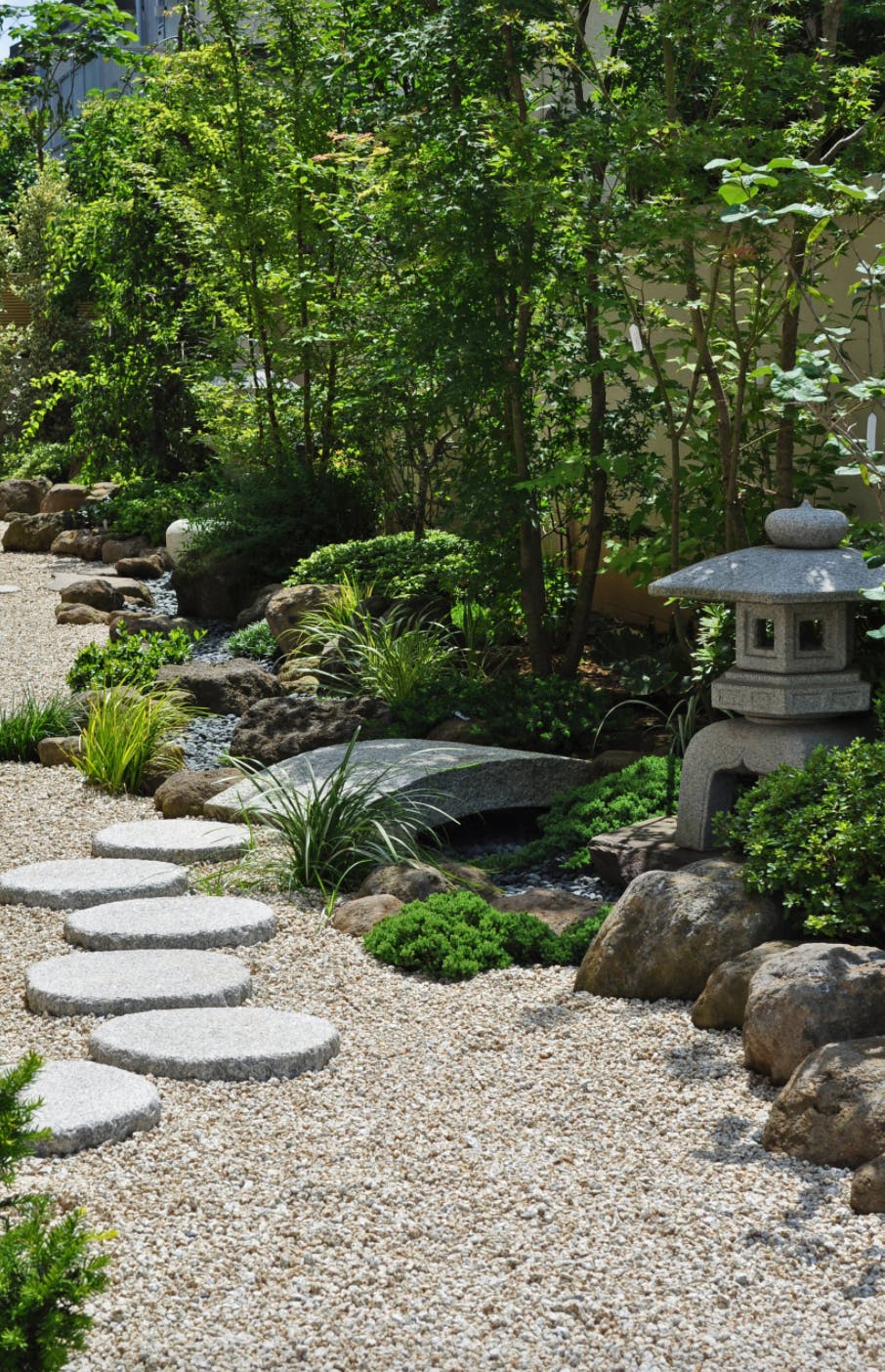 These two factors led to the development of the current type of stone garden. This new form also fit well with the advent of the wabi-sabi aesthetic, or the appreciation of that which is imperfect or incomplete. Stone gardens, therefore, began to be adopted beyond Zen temples as even samurai and merchants began creating their own. However, in the middle of the Edo period (1603–1867), naturalistic gardens that favored living plants stole the spotlight for a time.

Stone gardens experienced a resurgence in the Showa period (20th century), when gardener-historian Mirei Shigemori (1896-1975) created over 200 timeless examples. Despite holding to the traditional rules of stone arrangement, his gardens weren’t blind imitations of the old ways. Instead, he combined his own innovations and modern aesthetics with traditional forms.

Stone gardens are rich in symbolism, many reflecting Zen and ancient Chinese philosophies. It’s necessary to understand this layer of meaning to fully appreciate these gardens as more than just a collection of rocks.

For example, many gardens include the horai-jima, a representation of the unreachable island of immortals of Chinese legend. Smaller tsuru-jima (crane islands) and kame-jima (turtle islands), which symbolize longevity, are often built in its immediate proximity (not pictured).

Small stones that represent treasure ships, themselves symbolic of luck and prosperity, are usually arranged to a point with one of their ends toward the island of immortals, and are often seen in such gardens as well. They are either heading for the island to claim its treasures or heading home with their spoils. Their load is indicated by their height above the sand waves.

Ryumon-baku, named for the legendary Ryumon (Dragon Gate) waterfall on China’s Yellow River, is a known Zen symbol. According to the legend, any carp that managed to climb the waterfall would immediately turn into a dragon and soar into the sky. This is also the origin of the iconic Japanese koinobori (carp streamers). Zen teachings use this story to explain the attitude a practitioner needs to have to achieve enlightenment.

In the next photo, the sand represents the Yellow River, the ripples represent the waterfall, and the rock that juts out represents the carp. This symbolism is incorporated in the Saihoji garden as well; there, the rocks serve as a place for seated Zen meditation. 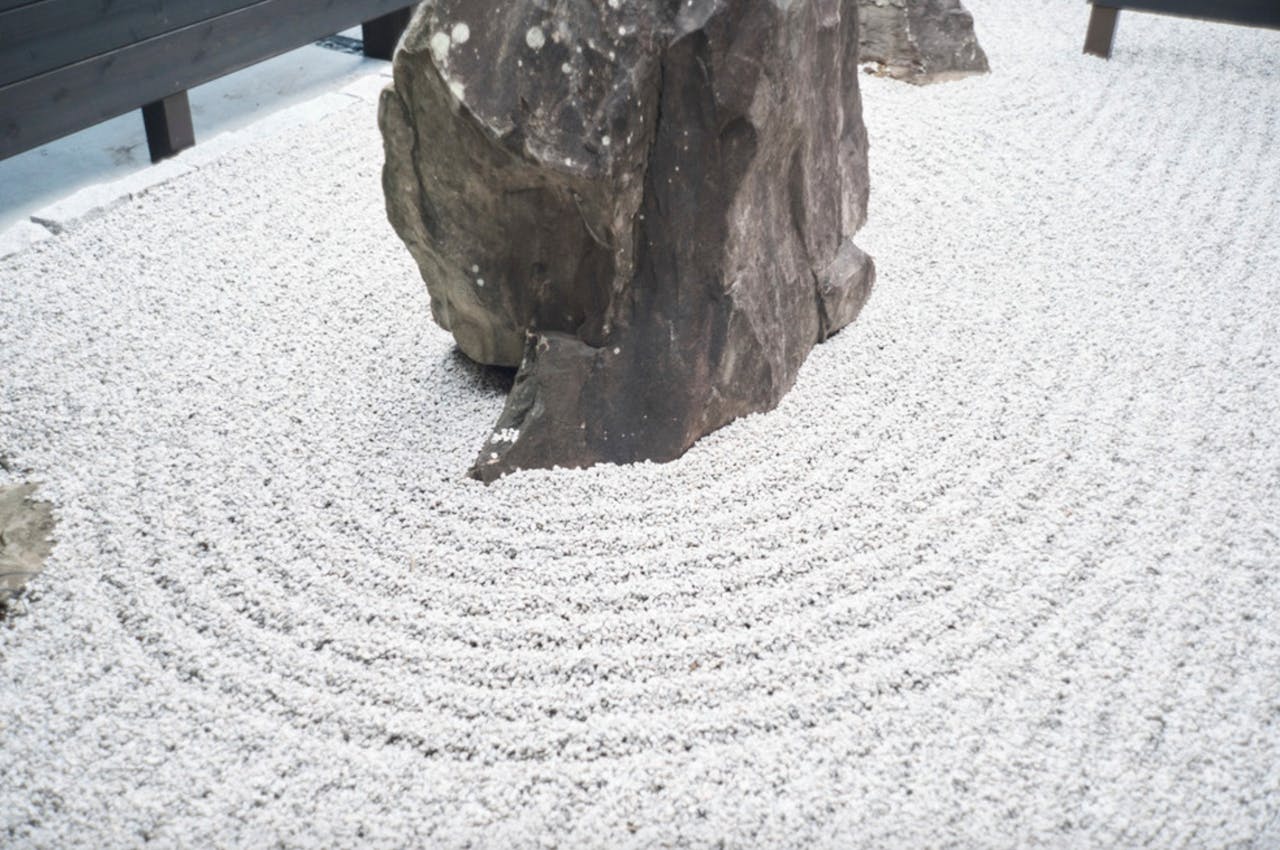 A rippling pattern in the sand that represents waves is called samon. This stems from the tradition during the Heian era (794–1192) of covering sacred spaces with white sand. Under the influence of bonkei, this sand came to be arranged in the form of waves to symbolize water.

Various patterns of ripples are used to symbolize river or ocean waters. Even in the same ocean you may encounter both big waves and mere ripples on the water’s surface. Although the large stones are usually more eye-catching, you can entertain yourself by contemplating the sand patterns and trying to guess what kind of waters they represent.

The patterns are usually drawn by a local priest using a rake or a broom. It is said that Muso Soseki wouldn’t leave even a speck of dust in his own garden. He believed that the habit of sweeping a garden serves to cleanse the mind of worldly thoughts. Likewise, drawing ripples in the sand is useful for calming and purifying the mind. 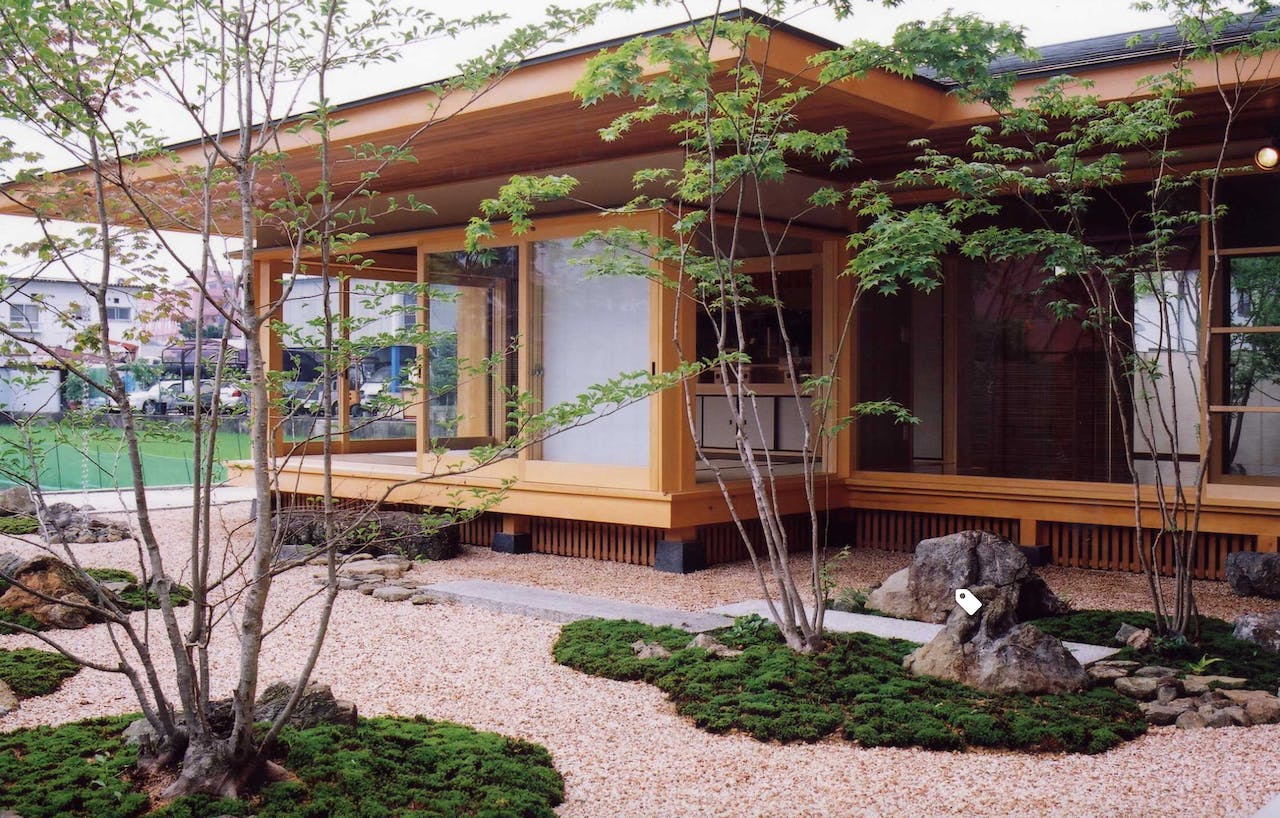 Stone gardens have experienced a boom in popularity outside Japan. They are less popular within the country, though in recent years, even the younger generations are turning their attention back toward Japanese traditional culture.

As long as you don’t think too big, making a stone garden isn’t an impossible task. Why not create a pleasant place where your client can take a moment to rest from their busy life and calm their soul? Don’t worry about breaking any rules: These gardens are meant to change with the flow of time and don’t have to be copies of historic gardens. Their cultural legacy is in creating something that touches a contemporary viewer’s soul, rather than just blindly imitating the past. 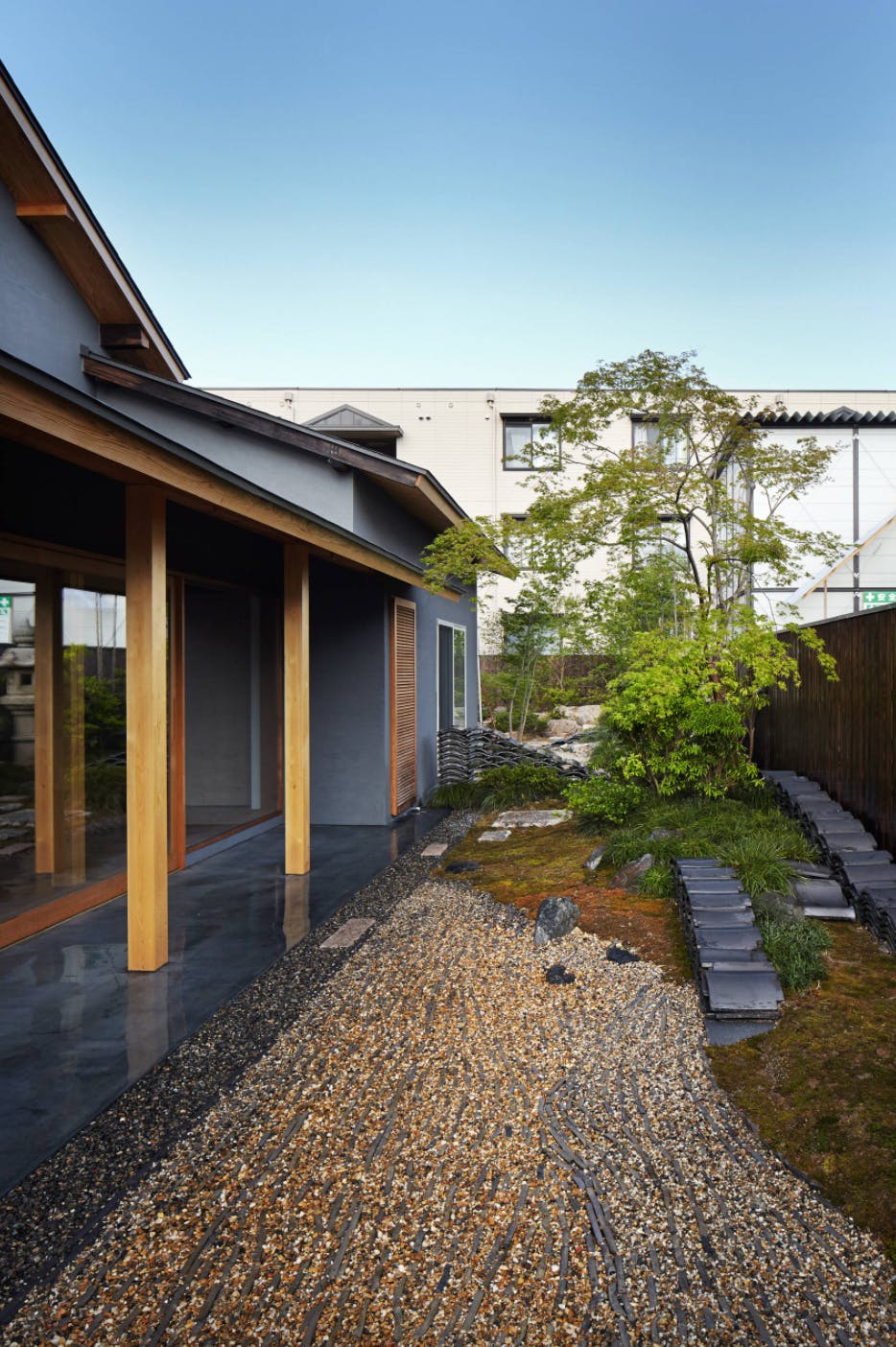 Although this garden boasts no grand stonework, it incorporates sand ripples, which are a major part of stone garden culture. The pattern is expressed by tiles laid in the sand and is easy to maintain because it doesn’t need to be drawn manually.

Instead of stones, a slight slope adds volume to the garden and expresses a view of nature. Planting trees in a pattern that reflects how they might grow in a forest makes the garden look perfectly natural.

It’s possible to create grand-looking scenery even in a confined space by using only small lanterns and stones. Features where stones represent ponds are called kareike (dry ponds). One of their advantages is that they’re easier to create and maintain than ponds with real water.

Adding waterside plants, such as sweet flag, makes the illusion even more convincing.

Free of ostentation, stone gardens beam with an irresistible charm. Gardens that have been used for centuries for practicing Zen may be just what we need today to remind us to take a moment from our busy lives to reflect on ourselves.

EDITOR’S NOTE: This article was written by Kaori Fujiyama, a Houzz contributor. 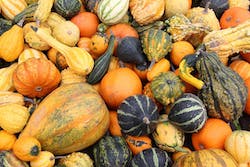 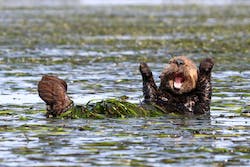 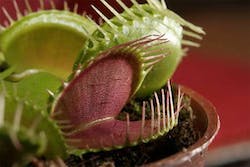 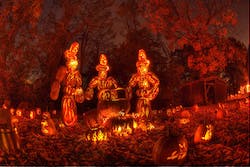