Thanks to the new second-generation 6.7-liter Power Stroke V8, when Ford releases its 2017 Super Duty trucks later this year, they’ll be the most powerful models to date, with torque expected to breach the 900 lb.-ft. mark for the first time.

And while Ford has been quick to boast of these trucks’ new power, the automaker says its engineers ran into a somewhat unforeseen consequence while testing the truck: It was too powerful for their current testing equipment.

Specifically, Ford had to replace the dynamometer sleds the company uses to simulate how the trucks perform on steep grades with stronger sleds.

These dyno sleds are attached to a truck’s vehicle hitch and towed behind it during testing. The sleds simulate steep grades by using a brake limiter to pull against the truck as it moves forward.

Ford says the brake limiter is a series of electric coils that act like a large magnet to provide drawbar pull against the truck, producing a realistic simulation of the effects of gravity while driving up a hill.

Ford product development engineer Jim Sumner says Ford used the same dyno to test F-Series trucks for the past 25 years. The sleds are designed to test the capabilities of the trucks and, ultimately, to find out what their limits are.

But even when simulating a full load, Sumner said, the dyno provided no challenge at all to the new Super Duty.

In addition to testing a truck’s capability, another huge benefit the sled provides Ford engineers is the ability to do incline testing on flat ground. Engineers can even simulate the grade of specific locations, such as Davis Dam, by uploading the grade changes of that location to the sled, which adjusts resistance as the truck drives along.

You can see the dyno testing in action in this video: 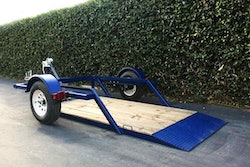 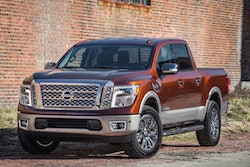 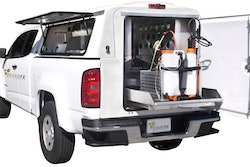 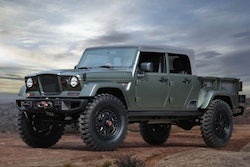