Cover Story: Not Your Father’s ASTROTURF

If your image of synthetic turf involves trailer park patios or putting greens outfitted with windmills and dinosaurs, it’s time to take another look. With a host of newly improved products hitting the market recently, synthetic turf might be the potential answer to some difficult landscape situations. It’s also intriguing from an environmental standpoint.

Brian Karmie, who partnered with his brother Dale to run ForeverLawn in Albuquerque, New Mexico, says synthetic turf has gone through major changes since it was introduced in the 1970s. “Originally it was just a carpet-like fiber designed for sports fields,” Karmie says. “A lot of improvements were made in the late 90s, but people said it still just looked too perfect.” ForeverLawn and numerous competitors have developed realistic-looking products with a short layer of underlying tan fibers to simulate thatch and hold the crumb rubber infill cushioning.

The right time and place
Although it’s still difficult to envision synthetic turf as the ideal product for a 2-acre yard, there are numerous sports fields and intimate high-traffic landscapes where it’s well-suited.

“The first thing you need to ask is ‘what problem are you trying to solve’,” Karmie suggests. “Is it a pet area, a golf green, a play area, or sports turf? A lot of companies have a one-size-fits-all product. If they say it’s for pets, you need to ask ‘why is it different?'” Karmie says ForeverLawn’s K9Grass is durable and does not use infill, which would be hard to clean in a pet application.

Jamie MacDonald, product manager for FieldTurf by Conserv FS, says pet turf is their biggest growing market. Because dogs confined in a typical modest-size backyard tend to put a lot of wear and tear on real turf, MacDonald says synthetic turf is a great option. “People are willing to spend money on their dogs,” he says.

Karmie says one unexpected market for ForeverLawn has been indoor sports training facilities. “Most schools need a facility they can use for different sporting events, band competitions, community events, and even phys. ed. for the kids,” he says. “A multi-purpose training facility can fill the need for all those things.”

Neil Christensen, who operates MultiSport Surfaces, a division of Christensen Landscaping, based in Hillsdale, New Jersey, installs SofTrak putting greens and SofGrass synthetic turf. He offers various turf types for lawns and sports surfaces for football, baseball, soccer, field hockey, and even bocce and tennis. He says putting greens offer the highest profit margin due to the technical skill required to construct them correctly, but he says the fastest growing market for him is playgrounds – predominantly commercial. “A residence doesn’t usually need a playground surface that lasts for 20 years and costs 10 grand, but a school does,” he says. He says the fall safety factor and anti-microbial benefit of his product are big selling points.

Christensen says each application offers a slightly different length, thickness, and density to the “yarns,” which resemble grass fibers. Each custom product also features a
different subsurface for cushioning, which can be glued down or applied using Velcro for a portable system. He cautions a poor subsurface can lead to shifting that causes ripped seams and torn backing. One recent development he has adopted is a backing made of polyolefin, which he says does not wrinkle, conforms to contours, is twice as permeable as traditional urethane backing, and is less likely to clog than backing punched with drainage holes.

Getting started
Christensen, who began installing synthetic turf nine years ago, is frequently called in as a subcontractor with special skills. “Borst Landscaping is a big company and has all the resources in the world to do what I do, but they don’t want to go down this road,” he says. “I did it when my company was smaller and I learned slowly. I think there’s a big market out there for landscapers who want to do this. They just have to make the commitment to doing it right.”

Christensen suggests landscapers with capital on hand may want to invest in specialized tools and training up front. “It’s like any landscaping,” he says. “You might be able to do it with a wheelbarrow, but you’re going to be more competitive with a skid steer. I joke one of my box trucks looks like a carpet company vehicle. We have all these special tools for cutting and trimming turf. We have a mechanical broom made in Germany that infills the silica. Can you do it with push brooms? Sure, but it’s going to be a lot harder.”

Christensen works with SofTrak, which is produced by Georgia-based XGrass. “I highly recommend them, because they train you,” he says. “You pay for that, but it will save you money by preventing mistakes.” He cautions mistakes can be costly, particularly large jobs and putting greens installed for finicky golfers. “The clients who are really into golf are willing to spend money on a quality product, but they know the game and if the surface isn’t right they’re going to know it,” he says.

Chris Heptinstall of All Pro Industries, Fort Oglethorpe, Georgia, agrees synthetic turf is a natural add-on service for landscapers. “Not only can they sell a $5,000 green, but they can sell $10,000 in landscaping around it. That’s the key,” he says. He says it also works the other way. A contractor installing landscaping may suggest an area that would lend itself well to synthetic turf. “The contractor has already sold the water feature, the retaining wall, the brick paver patio, and this turf ties in well with the rest of the landscape.” He adds the base prep for synthetic turf is identical to the prep for laying pavers, so the landscaper probably already has the knowledge, as well as plate compactors, hand tamps, drop spreaders used to apply infill, and sod rollers to compact it.

Heptinstall highly recommends his contractors offer clients an annual maintenance visit to reapply infill, brush off the excess, and roll it to pick up another $300 to $500. He says a good manufacturer will offer training via streaming video on their Web site, a 24/7 hotline for problems on the jobsite, and training sessions. All Pro offers one-day training sessions. The morning session involves an installation and the afternoon is dedicated to marketing and estimating. Heptinstall cautions anyone getting started in the business should check the turf company’s policy on protected territories. “Other companies may charge $30,000 for a protected territory and you have to pay that money, buy their product, jump through all these hoops, and if you don’t meet those requirements they sell your territory to someone else. We don’t do that.”

How to spot quality
Newcomers researching synthetic turf products should visit clients who have had their turf for a year or more. “If that fiber is not well-anchored, you might be able to pull fibers out with your fingers,” Heptinstall says. He recommends a double-ply urethane backing, which holds fibers in place and lasts longer than a latex backing. He says All Pro uses narrow fibers and double shears the tips to provide a refined appearance to their turf as well as smooth performance on a golf green.

Environmental impact
“It’s not just that we eliminate water, fertilizer, pesticides, and hydrocarbons from lawn mowers, but there is also the recycling benefit,” says Jamie MacDonald, FieldTurf. “A typical 80,000-square-foot football field will use about 20,000 truck tires from a landfill as infill,” he says.

Heptinstall says that while recent droughts have been devastating, it has been a boon for his business. “Here in Georgia, our lakes are 10 feet below normal, so we’ve seen a big increase in business for synthetic lawns,” he says. “I just talked with people operating a cemetery in California who were interested in our product because they have a moratorium on watering – a complete ban. We offer a very environmentally responsible product.” 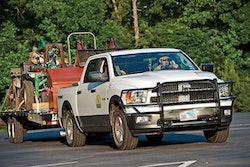 Trailers: The workhorses of the landscaping industry 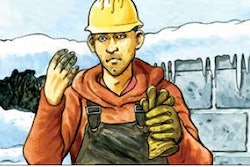 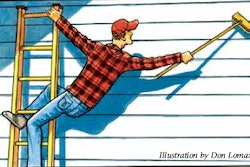 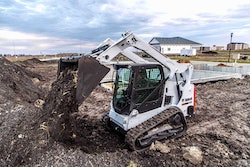