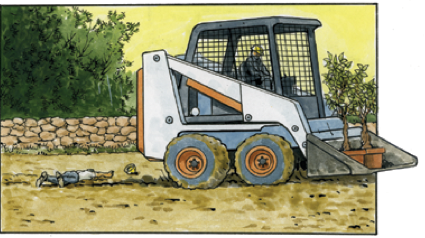 The accident: A worker operating a skid steer had taken an over-the-counter sleep aid the night before after not sleeping well the previous four nights.

Thanks to the medication, he slept soundly, but still felt a bit groggy. The mid-morning sun comfortably warmed the skid steer’s cab, and the man’s eyes began to stay closed longer than usual when he blinked.

As he made another pass across the yard, a co-worker looking the other direction stepped suddenly into his path. It took the skid steer operator a few seconds to register what had happened and another few seconds to stop the machine, which by that time had struck his co-worker.

What the expert says: Instead of taking over-the-counter sleep medication, this man should have seen a doctor, says Dr. Joyce Walsleben, who specializes in diagnosis and treatment of a variety of sleep disorders, including insomnia, sleep apnea, and narcolepsy.

Non-prescription sleep aids are broad hitters in the brain, she says. Their effects can hang over into the next day, as in this case. Many also affect other parts of the body, including the heart. Prescription drugs, however, are more targeted, so you can take what you need to rest – instead of a drug that does four other things to you.

“Performance is directly related to adequate, quality sleep,” she says. That means seven to eight hours of uninterrupted sleep each night. If you don’t get this much rest, you will build up a sleep debt over the course of your work week, as the example worker did. Eventually, you will have to sleep, no matter where you are, Walsleben says.

To get a good night’s rest, Dr. Joshua Septimus, a primary care internist at the Methodist Hospital in Houston recommends cutting off caffeine intake six hours before going to bed. Walsleben suggests avoiding caffeine and nicotine after noon. Your sleeping environment should be dark, quiet and comfortable, and you should wake at a consistent time every morning.

The first way most Americans try to treat insomnia is with alcohol, Walsleben says. Since it’s a depressant, alcohol will help you get to sleep. But it disrupts the natural sleep cycle and when it wears off, you wake up.

If you snore, are restless at night, wake up gasping or are sleepy during the day even though you’re getting adequate rest, you could have a sleep disorder and should see a doctor.