Earning Respect & Profit Along the Way

Shayne Newman leads by example with a focus on processes, follow-through and community and industry involvement.

Shayne Newman walks purposefully along the cavernous hallways of the Cannon House congressional office building in Washington, D.C., on July 26. He has an appointment to make.

Along the way, he passes an open room in which New York Congressman Charles Rangel is holding a press conference, and small groups of congressional staffers and visitors huddle in hushed conversation about the topic of the day — the stalled debt ceiling debate. Newman strides pass them all.

His meeting is with the staff assistant of Connecticut Congressman Chris Murphy. Although a bit hesitant and nervous in his presentation at first, Newman soon becomes emphatic in the message he’s come to deliver on behalf of the Professional Landcare Network (PLANET) trade association and peers across the country.

“Our industry must have relief from new H2B-work visa regulations soon to be enacted by the Department of Labor,” he says. “I’ll be forced to raise the wages of all of my employees by 50 percent, and frankly, that means I’ll have to reduce the number of people I employ. The new regulations will significantly compromise a building expansion we have had in the works for nearly two years.”

“The bottom line: A six-figure increase in salaries will cost me my business. I will default on my mortgage for the new building. I don’t see how these regulations can be good for small businesses or the economy.”

An hour later, a few blocks away, he gives the same talk to Connecticut Senator Richard Blumenthal’s staff member.

Later that evening at a crowded PLANET reception at an Arlington hotel, he makes a confession. “I’m a guy who mows lawns,” he says, “I never thought I would be lobbying Congress and interacting with other industry professionals at this level.”

He makes this comment in reference to his role not only in PLANET, as chairman of its public relations committee, but also as a board member of the Connecticut Nursery and Landscape Association.

In fact, Newman is a nose-down kind of guy whose emphasis on strategy and communication made his company, YardApes, in New Milford, Connecticut, one of the top 2011 TLC Landscaper of the Year Finalists.

Newman founded YardApes (which derives its name from the term used by his friend and co-worker to describe his niece and nephews) in 1990. Today, the company has 20 employees, consisting of Newman, operations manager Greg Malmberg, Elaine Lord, head of business development, and nine crews maintaining some 250 residential and commercial properties within a 20-mile radius. Many of the residences are second-home getaways for nearby New Yorkers.

It all began as part-time work for Newman as a University of Connecticut freshman in 1987. As is an often-told story in the landscaping business, he took out a loan to buy his first mower and maintained 20 lawns during breaks and weekends while pursuing a degree in finance. “I loved being outside,” he says. “After graduation, I went on my one and only interview. Immediately, I knew I wasn’t comfortable in a suit and tie, and more importantly, I wanted to work for myself.”

When Newman first incorporated YardApes, he led two crews in the field. With no financial backing and by slowly investing in the business, after 12 years, YardApes reached $600,000 in revenue.

“But we were at an impasse,” Newman says. “I had to either scale back the size of the business or commit to growing. To grow the business meant I had to create opportunities for employees who were career-minded.”

He created a series of incentives and “roadmaps” that were fundamental to his commitment to standards and processes for YardApes, as well as a strong company culture. On the walls of the equipment storage and maintenance area and crew break room are two examples.

This project’s water feature serves as backdrop for an outdoor kitchen. The flagstone that caps the pond walls is the kitchen’s countertop.

Below the flags of Mexico and Ecuador, the home countries of many of his crew members, is a poster-board listing “YardApes Values,” such as “We treat all clients and their property with respect as we know that without them, we would not have a job,” and “We ask questions if we disagree or do not understand.”

There’s also the “Ape Achievement Chart,” which lists all employees, their current industry certifications and areas of expertise with dollar amounts in hourly wages earned for each achievement. For instance, if you are an employee who is a certified lawn technician, you net an additional 75 cents per hour. If you’re bi-lingual and a crew leader, you earn an additional $1 an hour for each.

“Employees are in charge of their paychecks. It’s empowering. The chart shows everyone that if you learn, you earn,” Newman says. “There are 20 categories for achievement and a defined way to progress and be rewarded within the company. It’s a huge part of our culture.”

And perhaps most conspicuous of all, sitting on a nearby windowsill is a 3-foot-tall metal “Ape of the Year” trophy awarded this year to estate management foreman Roberto Angulo, LICT, based on ballots solicited from the company’s clients and the votes of fellow employees. While the trophy is a fun and quirky form of tribute, it’s backed up by a financial bonus.

The YardApes management team has its own set of visual reminders. On the wall of the office conference room are several large, white board panels that represent the company’s annual strategic plan and initiatives. These include, for example, improvements in training programs and tracking systems, led by Malmberg, and networking and marketing plans, led by Newman.

The field stone firepit and seating area replaced a driveway at a client’s lakeside vacation home.

“It’s important to have all of these plans and processes well thought out and documented,” he says. “They provide a template for employee growth and development and then company growth. For the most part, one informs the other.”

While all the talk of systems and goals might seem a bit rigid, Newman has the ability to connect and communicate with employees and clients alike. “He has great rapport with the guys,” Lord says. “He takes care of his crews and treats them like family.”

Malmberg adds, “Everyone is in a role for which they’re suited. We strive to find the right niche for everyone.”

While maintenance is the mainstay for YardApes, the company also excels at design/build projects such as this hardscaping project.

“Having employees in positions for which they are best suited alleviates employee turnover,” Newman says. “I discovered higher employee retention is directly linked to higher client retention.”

As a result, YardApes boasts a 95-percent client-retention rate, and this is reflected in testimonials such as that of longtime client Barbara Byrd, who says, “Of all the service-type individuals we’ve dealt with, Shayne is at the top of the list. I haven’t seen anyone as responsible as he is. Ask him to do something, and he’s on it instantly.”

Newman says his company’s commitment to community volunteer projects has yielded a stronger sense of teamwork.

“I discovered that higher employee retention is directly linked to higher client retention.”

The company is a charter member of PLANET’s Day of Service providing landscape renovations for local libraries, parks and playgrounds. YardApes, through ProjectEvergreen, supports GreenCare For Troops by lending a landscaping hand to local families of men and women serving in the armed forces.

“It’s both a pleasure and a privilege to help where we can,” Newman says. “To see the guys donate their time for community projects like the Day of Service is inspiring. It’s always hard work, but we all walk away feeling good.”

Like most other landscaping companies, the past two to three years have been challenging.

“Flat is the new up,” Newman says. “We are fortunate that most of our revenue comes from the maintenance side of the business. We’re also doing a lot more small- to medium-size projects.”

Still, he is modestly optimistic about the future, and sure about one thing.

“To grow the business meant I had to create opportunities for employees who were career-minded.”

“Our vision statement is to be the most respected landscaping company in the country. Not necessarily the biggest or the most profitable. But with respect, good things will grow from that.” 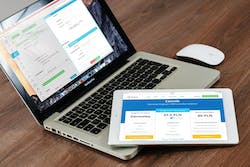 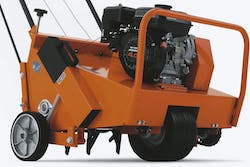 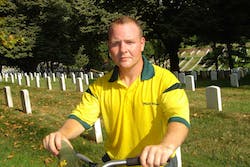