After three years of warnings and deadlines, the state of Michigan has filed a lawsuit against landscaper Paul Golembiewski accusing him of trespassing on the Fred Meijer White Pine Trail. The trail is adjacent to the landscaper’s backyard.

Golembiewski, owner of Expressive Horticulture, has been accused of encroaching on 3,000 square feet of the right of way of the trail after creating an expansive outdoor living area in the space.

The landscaper built a basketball court, a playground, a bridge that spans a small creek and much more back in 1979, when the trail was simply an unused railroad bed.

He originally received verbal permission from the owner of the railroad and state officials. Once the railroad bed became part of the trail system, however, the Michigan Department of Natural Resources (DNR) ordered Golembiewski to remove everything he had done in the right of way – a job comprising about five tons of materials.

The DNR has requested Golembiewski to restore the property to its original state numerous times, but he has not cooperated.

Golembiewski and his wife note that trail users often compliment his landscaping and use the boulders for benches. He also put up a wooden fence around the stream on his side of the trail while the other side has a 13-foot drop-off.

In the past, he offered to lease the land $100 per year and release the state from liability, but was turned down.

“Mr. Golembiewski’s projects on the Parcel have significantly decreased the Parcel’s value, created a hazard, and significantly harmed the public’s interest in the Parcel by effectively eliminating the uses to which the Parcel has been legally designated,” Assistant Attorney General Nathan Gambill wrote in the lawsuit.

In a2012 letter filed in court, Golembiewski wrote, “Why now, and why not everyone who has encroached on state property?”

DNR’s attorney counters that the landscaper has been the only individual who has failed to comply.

“Unlike Mr. Golembiewski’s neighbors, who voluntarily removed offending structures once the DNR notified them of their trespasses, Mr. Golembiewski has repeatedly refused to voluntarily comply with the DNR’s efforts to clear its right-of-way along the Trail,” Gambill wrote in the lawsuit.

The DNR wants the court to order Golembiewski to remove the offending landscaping, including groundcover, trees, boulders, and the deck, or to allow the state to remove the materials and bill the landscaper for the labor.

After creating his special outdoor area that both his kids and grandkids have enjoyed, Golembiewski is reluctant to dismantle his work. However, he doesn’t plan to hire an attorney for the lawsuit.

“I really believe that they’re trying to set a precedent here, that this is going to be a standard for people that have encroached,” Golembiewski said. 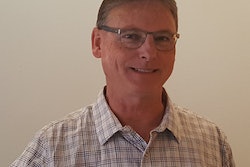 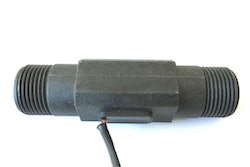 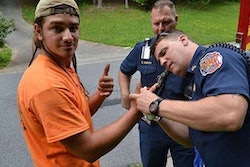 News roundup: Copperhead bites landscaper who reached for it 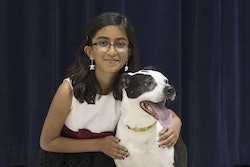