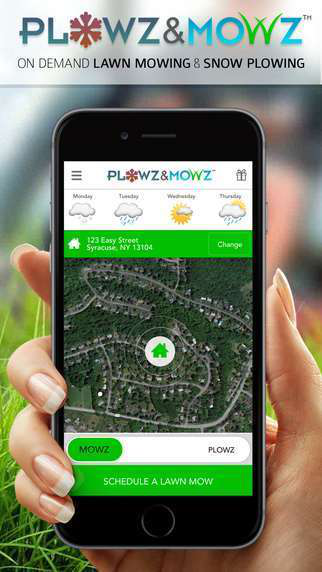 Plowz & Mowz connects local landscapers with customers who need a service completed on a certain day.

The Uber equivalent of pretty much any service has been attempted, but app Plowz & Mowz must be doing something right, as it has raised $1.5 million from start-up studio Science and other angel investors.

Plowz & Mowz was started in 2014 in Syracuse, New York. The idea was also born there after co-founder Wills Mahoney’s mother was snowed in and had to watch snowplows going by headed to other jobs.

After the app was launched, it quickly spread to Boston, Chicago, Indianapolis and Raleigh, North Carolina.

Founders Mahoney and Andrew Englander feel their app allows professionals to reach a group of potential customers by offering on-demand services rather than seasonal contracts.

“Sixty-five percent of homeowners have never hired a professional landscaper (and) it’s primarily due to the cost of a seasonal contract,” Englander told TechCrunch.com. “We offer plows, mows, and leaves … outsource it directly to the smartphone and it’s done by the same provider base and fits seamlessly within the current route structure of the landscaper.”

The app saves landscapers time from having to go estimate projects by having the customers enter the information about their lawns and driveways and when they want the work completed. An algorithm calculates the price and then the job appears on providers’ apps for them to decide whether to request the job.

According to Plowz & Mowz website, the average Plowz provider makes over $1,200 during a storm and the average Mowz provider earns an extra $620 a week. Businesses select the radius they are willing to service and are free to pass on jobs if they are already busy.

Providers for Plowz & Mowz are required to have a team of employees, commercial-grade equipment and $1 million in general liability insurance. Once a provider is on board, Plowz & Mowz supplies a GPS tracking system and guarantees payment for each job by the next business day.

The company has handled 56,000 jobs so far, with the majority of the requests being for lawn mowing.

Check out the video about the app below: