The Metropolitan Water District of Southern California (MWD) offered turf rebates like many other water suppliers, but it ended up funding one company that, according to many observers, left only gravel wastelands in its wake.

The turf removal company known as Turf Terminators has been surrounded with controversy for some time, with a groundswell of area residents disapproving of their methods and others accusing the company of bribing the Los Angeles mayor.

The company originally started as an environmentally focused investment startup called Carbon Venture Partners. It was founded by Ryan Nivakoff in San Francisco. A month before the MWD’s rebate offer went up from $1 to $2 per square foot, Nivakoff renamed the business Turf Terminators and relocated to L.A.

MWD required that only landscape contractors that had been in business for at least three years would be allowed to collect the subsides. Turf Terminators was able to skirt this restriction by purchasing an older landscaping company, Pan American Landscaping.

Turf Terminators’ pitch was simple: Homeowners would sign their rebate over to the company and receive drought-tolerant landscaping in return.

Customers had the option of choosing mulch or gravel as a replacement ground cover and could have Mediterranean or Southwestern plants installed as well.

Before Turf Terminators closed its doors, it collected $44 million in rebate funds, removing 16 million square feet of grass from 12,000 yards in less than two years.

However, after having their turf removed, many homeowners discovered they had not made an environmentally friendly choice after all.

Staci Terrance Goldfarb hired the company in December 2014. After installing the gravel and low-water plants, Turf Terminators had to return three times to replace the dying plants. Finally, Goldfarb gave up on trying to save the day lilies, rosemary and yarrow.

“My yard just looks worse than ever,” she told Bloomberg in an email. “So sad, the plants may be drought tolerant, but certainly not heat tolerant. Soon I could end up with all rocks.”

Another resident, Noel Vega, had his drip irrigation installed by Turf Terminators. The system broke shortly after it was installed so now he waters his plants as he would when he had grass.

Melanie Winter, director of the River Project, which aims to restore and preserve waterways, had met with Nivakoff. He was considering paying Winter to train his staff on grading to retain water, but the discussions tapered off.

“If you’re going to transform a landscape,” Winter says, “you should do it in a way that adds the most value.”

Winter was able to transform a number of yards through a $700,000 grant from a nonprofit organization focused on water conservation, creating mounds of rich mulch with natives such as coyote brush and apricot mallow growing on top. She says they bloom and die cyclically so they don’t need irrigation.

“Ours is regenerative,” she told Bloomberg. “It’s alive. It’s addressing so many things, as opposed to checking off ‘no grass.’”

The mulch does require replenishing periodically. That’s why a majority of Turf Terminators’ clients chose gravel. One who did go with mulch, Don Brownlee, was pleased with his yard overall, but not until he had added one-third more plants on his own. The mulch that was used by the company was littered with everything “from palm fronds to pieces of installation,” he said.

A Turf Terminators associate, Adan Ortega, asserted that the negative comments were driven by the competition.

“The California landscape arena is full of, like anything else, jealousies,” he said. “A lot of the criticism is from people that would’ve wanted to do something themselves and had a more nuanced but inaccessible approach.”

When the MWD used up the $88 million it had set aside for the program, it debated about continuing the program and voted to commit an additional $340 million in 2015 without specifying what the lawns should be replaced with.

“Yes, it certainly does matter what you replace [grass] with,” said Jeffrey Kightlinger, MWD’s general manager. “But not necessarily in terms of saving water. We decided that Metropolitan should not be in the business of dictating the replacement.”

The money set aside for the rebates resulted in the removal of 170 million square feet of grass, or the equivalent of about 3,000 football fields. Yet L.A. city controller Ron Galperin concluded in an audit of the turf replacement program that it had “the lowest return on investment [compared with] other conservation programs.”

When the rebates dried up around July 2015, Turf Terminators stopped accepting customers and laid off most of its 450 employees.

Whether the water savings were worth the added heat islands remains to be seen, but Turf Terminators has already moved on to installing energy-efficient windows under the new name Build Savings. 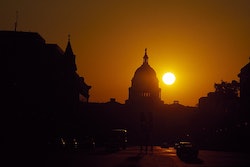 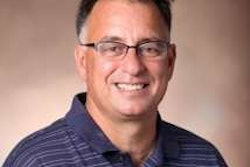 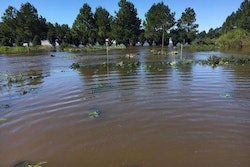