They say don’t shoot the messenger and for weeds in your clients’ yards, it is advised that you notice what message they’re conveying before you spray them into oblivion. The presence of weeds can sometimes reveal underlying conditions going on with the lawn's overall health.

Similar to how ornamental plants have their preferred growing conditions, weeds as well thrive in certain conditions so it is wise to consider what factors are allowing the certain pest to flourish. By treating the underlying problem, you can reduce the amount of time your crews will have to be out applying post-emergent herbicides.

Here are some common weeds and what their appearance can mean in a customer’s lawn:

Not to be confused with the cooking banana, this weed has a broad, oval-shaped leaves and has flowers that appear on leafless stalks that originate from the base of the plant. They adapt to most sites well but are particular noted for thriving in acidic soils. They also enjoy poorly drained, compacted soils.

Common chickweed is low-spreading and has a similar appearance to mouse-ear chickweed. The main difference between the two is common chickweed leaves are light green and less hairy while the other has dark green leaves that are covered in hair. When chickweed appears, it is a general indicator of highly fertile soil, but it can also indicate poor drainage or too much watering.

One of the most ubiquitous weeds, second to crabgrass, dandelions can grow in a number of climates, but it does prefer moist conditions and soils. Its seeds rapidly colonize disturbed soil and also thrive in weak, thin turf. They love acidic soil and it is hard to have absolute eradication of this tenacious plant.

One of the best methods of control is maintaining a healthy lawn that is able to outcompete the pest. Maintaining a proper mowing, fertilizing and irrigation schedule is the best cultural method to use, but pre-emergent herbicides are almost a must for early season control.

This low creeping weed features rounded, scalloped leaves and has small funnel shaped flowers. It prefers moist, shady sites and is also known as “Creeping Charlie.” It is extremely common in some areas and quite difficult to control.

A combination of poor fertility, shade and wet soils stack the odds in favor of ground ivy surviving so it is important to remedy these situations. Also by mowing at a height of 3 inches or above the turf will have a competitive advantage. Fall is a prime time for herbicide applications as well as a spring.

Lambsquarters can be identified by its lance-shaped leaves that are pale gray-green. It can grow from a few inches to five feet. It produces tiny yellow green flowers from May through November.  It is another broadleaf weed that indicates highly fertile soil but also enjoys compacted soils.

Lambsquarters like chickweed are also edible, but if your client isn’t the adventurous type, you can aerate the lawn and reduce foot traffic to give the turfgrass a fighting chance. Consistent mowing will also cut down lambsquarters before it can produce seeds.

This is a perennial that grows from a central taproot and spreads out in a wiry system of stems and blue-green leaves that alternate. It prefers dry, hard-packed soil and can be found in pathways, sports fields and other areas with heavy foot traffic.

Aerate the soil to relieve compaction and provide uniform watering to help grow healthy turfgrass. Well aerated and well fertilized lawns make it difficult for knotweed to get started.

White clover is a low-growing perennial that is easily identified with its set of three leaflets while the flowers are spikey and white. White clover can often be found when soils are low in nitrogen and where lawns are thin.

Clover is a favorite for bees so for some clients it may be better to leave the patch be, or have it serve as a lawn alternative in a location where growing turf seems nigh impossible. The other option is to improve the nitrogen levels and nurture the lawn to a healthy thickness. 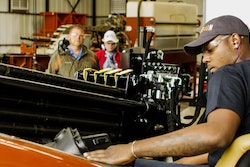 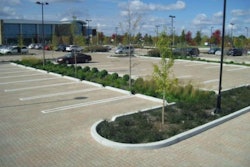 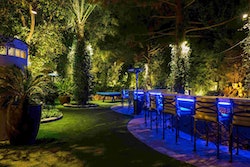