What appears to be merely an attractive retaining wall and staircase leading up to Ellicott City’s Circuit Court Complex has much more than meets the eye.

This project, which was originally supposed to be merely a repair job from a magnitude-5.8 earthquake and following flood that occurred back in 2011, became a prime opportunity for Howard County’s Bureau of Environmental Services to improve pedestrian safety, increase parking and incorporate stormwater management.

Because Ellicott City, Maryland, is listed on the National Register of Historic Places, the options of stormwater management were limited, so Jim Caldwell, director of the county Office of Community Sustainability, saw this damaged retaining wall had potential.

“There was a lot of apprehension,” Caldwell told the Bay Journal. “Our public works department wanted to fix the wall and walk away, and they wanted to build a stairway and walk away. This is the first modern BMP (best management practice) in town.”

The engineering firm McCormick Taylor was hired to design a solution that would fix the retaining wall as well as improve access to parking and treat runoff from two acres of pavement.

Despite these challenges McCormick Taylor ended up creating flumes that lead into a two-tiered biorentention treatment train. The water is carried beneath the stairs to the first bioretention cell, and when full it overflows into an aesthetically pleasing waterfall. This water flows into another cell below.

The design also features densely planted native species that take up nutrients. Pedestrians have easier access to the courthouse and the cultural attractions below, while the design improved the lighting of Parking Lot E.

The entire project ended up costing $3.4 million and the stormwater management portion was $1.5 million. It proved its worth during a flash flood that occurred last summer that damaged a significant part of the town. 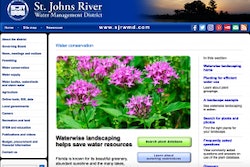 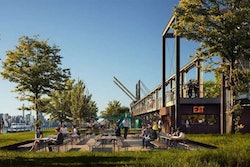 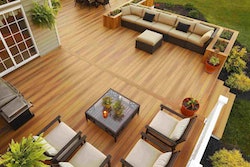 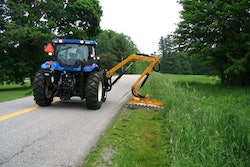