During periods of heavy precipitation, runoff is to be expected due to the impervious nature of these surfaces. It is estimated that stormwater runoff may be as high as 55 percent of total precipitation in urban areas.

Other factors that may lead to runoff include compacted soils with poor drainage, due to lack of pore space, which are commonly encountered in urban environments. Negative consequences of stormwater runoff include: slope erosion, exceeding capacity in municipal waste water treatment systems and incursion of chemicals, oils and fertilizers into natural bodies of water.

Such pollutants and their sources include: pesticides, copper from automobile brake pads, zinc and lead found in roofing products and phosphorus and nitrogen contained in fertilizers. Extreme levels of phosphorus in the water can cause eutrophication (which is the buildup of nutrients in natural bodies of water).

Eutrophication may lead to algal blooms, which are fed upon by microorganisms. As the microorganism populations increase and

eventually die, the oxygen in the water becomes depleted, which harmfully affects fish and aquatic wildlife.

Natural settings like forests, open fields and wetlands are more efficient in processing stormwater. This is affected by greater water infiltration into those highly permeable soils. This natural process can be simulated in urban environments with the use of green infrastructure (GI).

A simple description of GI is “constructed features that use living, natural systems to provide environmental services, such as capturing, cleaning and infiltrating stormwater; creating wildlife habitat; shading and cooling streets and buildings; and calming traffic.”

Among the benefits of GI are: amelioration of temperatures in urban areas, improved aesthetics of streets and sidewalks and minimizing and cleaning stormwater runoff. Several forms of GI can be utilized in urban settings, including: urban forests, green roofs, rain gardens and bioswales.

Urban forests: Trees and other woody vegetation found in municipal parks and along streets, as well as trees in residential landscapes, compose the green belts referred to as urban forests. When developing a new neighborhood, a long-term benefit can be realized by planting trees.

Green roofs: An important benefit of green roofs, a.k.a. rooftop gardens, is the ability to reduce the heat island effect. Hardscapes such as buildings, streets, sidewalks and driveways reflect heat from the sun, which leads to raising ambient temperatures.

Planting groundcover, turfgrass, shrubs or small trees on rooftops is a simple way of creating a green roof. Another way is to plant a communal garden of vegetables to be enjoyed by residents of the building. With either option, selection of plants should emphasize ones with low maintenance and can withstand drought and temperature fluctuations. Green roofs provide many benefits, such as improving aesthetics, reducing stormwater runoff and decreasing heat island effect by lowering roof temperatures through evapotranspiration. According to the Environmental Protection Agency (EPA), ambient temperature on a green roof will be cooler than a traditional roof where, on a sunny day, temperature may be 90˚ F higher than the surrounding air.

When building a green roof, several layers may be installed on top of the existing roof. The base layer is a waterproofing membrane to protect the existing roof structure. Immediately above that is a drainage layer that leads the water to a storage area and protects the roof. This is followed by a filtration sheet to allow for water percolation and retain growing media in the top layer. The topmost layer contains plants that should be grown in a medium with low bulk density to reduce weight loads and sufficiently porous to allow for water infiltration.

Rain gardens: A miniature wetland in a residential setting can be an efficient and pleasing way of creating a rain garden. Simply stated, a rain garden is an area in the landscape which is lower than the adjacent grade to collect rainwater from roofs, driveways or streets, thus allowing infiltration into the ground.

For a selection of native plants to use in your region, please click here. Such miniature-scale gardens can be expanded to a much larger scale in the form of retention ponds, seen along interstate highways, that collect rainwater and allow for slow infiltration.

Bioswales: These are defined as “stormwater runoff conveyance systems that provide an alternative to storm sewers.” They function in a manner similar to rain gardens, but they differ in size, being larger in scale.

Bioswales must possess soils sufficiently porous to allow for an infiltration rate of at least ½ inch per hour. An underdrain pipe may be installed to facilitate flow. Additionally, to improve existing soils, sand, compost, topsoil, perlite or vermiculite may be added as amendments.

In order to allow for slow filtration of contaminants and to permit water infiltration, plant species used should include large grasses and/or deep-rooted woody plants.

Parking lot islands, as well as road shoulders and medians, are ideal sites for bioswale construction. Use of bioswales in flat areas or those with slopes less than 5 percent is impractical due to reduced water movement. They may be constructed in natural contours with slope modification not to exceed a 3:1 ratio.

The maximum service (drainage) area of each swale should not surpass 10 acres. Ideally, the bioswale surface area should be 1 percent of the total area from which it will receive stormwater. Good maintenance practices are essential to sustain effectiveness. Uncontrolled weed and exotic plant growth and accumulation of debris will reduce the benefit and aesthetics of a carefully constructed bioswale.

So, is green infrastructure the wave of the future? Consider the following: First, by adopting GI practices, you can contribute to both the short- and long-term environmental protection efforts. Second, providing novel and creative habitats and solutions to your clients offers you a competitive edge to grow and prosper your business. So, think about how imaginative and artistic you can be. 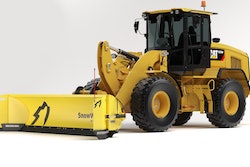 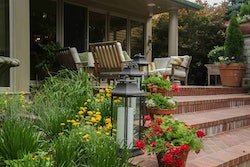 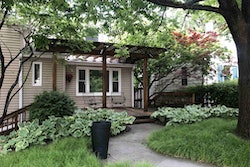 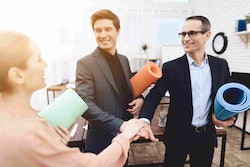 Too fit to quit: Getting your health and wellness program right