October is known nationwide as Breast Cancer Awareness Month, and throughout the month, you probably noticed your fellow landscaping companies donning their pink apparel and decorating their doors with pink ribbons to show support. But others in the green industry, such as Husqvarna, have decided to take a slightly different avenue when it comes to spreading awareness.

For the second year in a row, Husqvarna says they have partnered with the organization Men Against Breast Cancer (MABC) to help raise funds and awareness for breast cancer.

Throughout the month of October, Husqvarna says it will promote MABC through the company’s social media channels and raise awareness for their unique cause. The company says it will also hold the 2018 Husqvarna Saws for a Cause Breast Cancer Awareness Giveaway, where one randomly selected winner will receive a limited-edition pink 450 Rancher chain saw and limited-edition pink toy chain saw. The giveaway entry period runs from Oct. 1 through Nov. 15.

When initially looking for organizations to partner with, Michelle Sordi, senior marketing director North America for Husqvarna, says the company wanted to find groups that were not only unique but also matched the company’s target demographic.

“We were looking for an organization that we felt matched our demographic, and we found Men Against Breast Cancer and thought it was unique because it’s men who are against breast cancer,” she says. “Normally, people associate it with more women community groups. And in our industry, although there is still a huge amount of women users (between 30 and 40 percent), we have a larger base of men who use our products. It’s a different approach partnering with MABC.”

MABC began in 1999 and was founded by Marc Heyison in honor of his mother, a 27-year breast cancer survivor. When his mother first was diagnosed, Heyison says he can recall he and his entire family accompanying his mother to her appointments.

“Ninety-five percent of the time, all of us were with her, but she was never by herself in that rare case that we all couldn’t go,” he says. “From our family’s perspective, that’s the way we were brought up. It was our time to be there for our mom (because) she was always there for us. But I noticed a fair amount of women were by themselves and I didn’t really understand it.”

After this observation, Heyison says he became more of an advocate for breast cancer awareness by hosting a few golf tournaments to raise money for underserved women to have access to the same care his mother had.

“She’s alive because of early detection,” he says. “So, the more I got involved in that time period, I started to see that there really wasn’t anything for men, and I wanted to do something to try and get men involved. In my opinion, men can make a difference if they know what to do and are able to be educated and empowered to do it.”

When a friend and now board member for MABC came to him in 1999 supporting Heyison’s idea to create a breast cancer awareness organization for men, the pieces began to come together.

“As fate would have it, one of my board members was, and still is, a (male) breast surgeon,” he says. “He called me up in 1999 and said a lot of men were coming to him after their wife or partner’s surgery. They weren’t sure what to do and since he was a guy, they thought he knew and would ask him. So, I hung up the phone and created Men Against Breast Cancer.”

According to Heyison, this organization was and is to this day the first and only national 501(c)(3) nonprofit organization designed to provide targeted support services and educate and empower men to be effective caregivers when cancer strikes.

“Sadly, we’re the only national organization whose mission is really to get men involved, and that’s why our ribbon is pink and blue,” he says. “It shows a partnership between men and women, and we need to be there with the woman we love, side-by-side. At the end of the day, if a woman knows she has a partner that’s going to be there with her every step of the way, she’ll be able to focus more on her treatment and improve the quality of her survivorship, which is the best we can hope to do as caregivers.”

Even with national outreach, Heyison says the group isn’t what you would call “large,” but he says word of mouth and partnership with Husqvarna has tremendously helped spread word about the organization and its goals.

“(Working with) Husqvarna has been great for raising awareness, and this market is perfect for us,” he says. “Not only is it a market where a lot of their target demographics are men, but it’s families and it’s about being there for each other.”

Heyison notes that most people don’t understand the point of the group at first because they don’t offer tangible results, but Sordi says she believes groups like this are able to humanize the struggle individuals face with breast cancer.

“I feel like there’s a human side to every organization that sometimes gets overlooked, especially when you’re in manufacturing” she says. “We talk a lot about products and this is the human side. This disease touches all of us. I don’t think there’s a single person that doesn’t know someone that’s been affected. I think (partnering with organizations like MABC) makes it more human.”

Based on reports provided by MABC’s social media department, Heyison says they’ve seen more feedback and people taking notice of the group since partnering with Husqvarna.

“People need to understand that a caregiver can make a difference in the person’s life who’s battling the disease, no ifs, ands or buts,” he says. “If you can handle the stress in a different manner, you’ll be able to attack problems better and you’ll be able to have a better quality of survivorship. I think men need to know that they play a vital role in that if they’re a caregiver.”

Along with supporting Breast Cancer Awareness Month in October, Heyison says MABC is gearing up for National Family Caregivers Month, which begins in November.

Along with the Saws for a Cause campaign, Sordi says Husqvarna will be giving a $10,000 cash donation to MABC this year. She also notes that through their partnership with MABC, Husqvarna has been able to work with Heyison to locate families affected by breast cancer, get them teamed up with local dealers and landscapers and provide the family with yard maintenance and cleaning services. The plan, she says, is to continue that process this year.

Sordi adds that through these campaigns and partnerships, she hopes to communicate to the public that Husqvarna not only cares about employees affected by breast cancer but also their customers that may be in similar situations.

For landscapers wanting to show support for Breast Cancer Awareness Month this year and next year, keep in mind that changing the color of a piece of equipment is not the only way to get in the game.

Sordi says it’s simple for green industry professionals to get involved in Breast Cancer Awareness Month because companies have the option of changing the color of uniforms and work shirts for the month of October. Or, she adds, it can even be something as simple as putting pink ribbons on the doors of your establishment or wearing pink pins on your shirts.

“I think that doing the small thing is really what gets the bigger impact,” she says. “When you think about large crews that are going residentially from home to home or working in municipalities, changing a small thing that they wear like a vest or t-shirt or giving them a hat would really go a long way.” 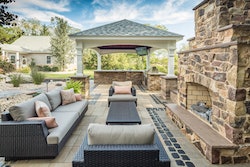 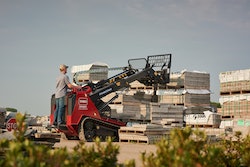 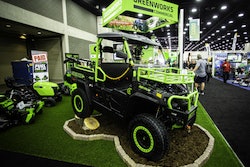 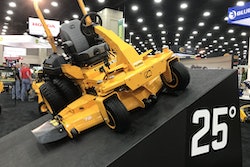