Water works: The ins and outs of creating backyard ponds

If you’re working on a pond installation project for your customers and have already completed the actual install, now is the time to start working on what will go inside it.

Take a look at a few recommendations from Aquascape on maintaining pond ecology, aquatic plants and more.

Much like in nature, backyard ponds can act as vital ecological staples in a landscape, and they work hand-in-hand with the animals and plant life in the area to create one big functioning ecosystem.

Water quality is especially important when creating an ecosystem based around a backyard pond, and you’ll need to keep tabs on the pH of the water.

Levels of pH are measured on a scale of 1 to 14, and a pH of 7 is considered neutral. Numbers above seven are considered basic or alkaline, and numbers below seven are considered acidic. According to Aquascapes, the typical pond will have a pH range of 6 to 11, which reads as slightly acidic to strongly basic.

The two types of nutrients, macro and micronutrients, will also contribute to the quality of the water. Macronutrients are what are typically found in commercial fertilizer mixes, and this nutrient type features three of the 17 elements required for life: nitrogen (N), phosphorus (P) and potassium (K).

Ecosystems are made up of multiple levels, and the first level to this backyard pond ecosystem includes consumers/converters, which refers to organisms that consume waste, its chemical elements and energy from the sun and then convert it into mass, energy and life. This level will include bacteria, protozoa, aquatic plants and more.

Bacteria will work together like a recycling plant by taking dead material and waste to convert it into usable nutrients in the food chain, according to Aquascapes. Bacteria also serve an important purpose in the completion of the nitrogen cycle.

Aquatic plants are certainly the most visible element of level one, and there are numerous ones to choose from when designing your customer’s pond. They come in varieties such as submerged, floating, marginal and emergent plants, and the depth at which they can be submerged ranges based on the type chosen.

The second level of the ecosystem will include zooplankton, which are considered consumers, and many species of zooplankton are filter feeders.

The third level includes aquatic invertebrates, such as larval insects, leeches, snails, worms and mature insects. Larval insects are very common in backyard ponds, and the primary place to look for these level two and three visitors is at the bottom of the pond. They tend to flock to decomposing leaves or near the surface around the edges of the pond.

The fourth level will include amphibians like frogs, toads, salamanders and newts.

The final two levels of the ecosystem will include fish, birds, reptiles, snakes, turtles and other animals.

For backyard ponds that have fish, the most common fish choices come down to goldfish, koi and orfe. Each will have certain specific food needs, but as a whole they are omnivorous.

Rocks, stones and gravel are staples in backyard water features, as they serve many purposes. Knowing how to use these stones properly will help your crew with time, money and the overall quality of the work performed.

There are numerous types of stone available for use in a backyard pond, but some of the most commonly known and used are granite, moss rock and limestone.

Granite is commonly used in the Midwest, and it is a hard, crystalline rock found in the form of both boulders and rounded cobblestones. Since granite is inert, it won’t leach minerals into the water, which also means it’s beneficial to the pond ecosystem. They come in a wide variety of colors and sizes, which makes them pretty easy to work with.

Moss rock has an aged and weathered look and will have lichens and mosses growing on it. Typically, it is a sedimentary stone that’s somewhat porous, and it’s considered a character stone, which means it can be pretty expensive depending on your location. Using this type of rock in the pond can give it an aged look even though it’s brand new.

Limestone is composed mostly of calcium carbonate and is a sedimentary rock. It’s usually a flat stone and is often used in creating waterfalls because of its ease of installation. This type of stone should be used sparingly, according to Aquascapes, because the calcium carbonate will alter the chemistry of the water.

Having gravel in and around the pond will act as a cover to the liner, provide a habitat for beneficial microorganisms and give structural stability to the pond. The gravel will give the pond a water-worn feeling that will be easy on the feet for customers who actually want to go in their pond.

Since the edge of the pond is the part most people will see, it’s important to make sure it’s constructed correctly and is also pleasing to the eye.

The pond edges should always be done last, but since you’ll probably end up setting up the perimeter rocks at the beginning of the day, you’ll need to have a clear idea of what the finished edge will need to look like.

For customers with children, there’s no denying that they will inevitably want to play in or around the pond at some point, so go ahead and incorporate some larger boulders around the edge to act as seating for them. This will allow them to safely sit close to the pond on a solid surface without having to get too close to the water.

It’s also a good idea to create a few beach-like areas that gently slope down into the pond in case kids want to dip their toes in the water but be sure to line these areas with smaller river pebbles, as they are easier on feet.

When creating the edge, one idea is to try placing larger boulders across from the viewing area to help retain the soil that will later become a raised planting area. For the back edge of the pond, you could potentially keep the shelf shallow for marginal plants, which Aquascapes says will allow you to have more stones showing above the waterline.

If your customer likes the idea of a perennial edge, fold the liner tightly up against the boulders, and bring the soil right up to the boulder and slightly above the liner. After this, install the plants according to the design.

Contrasting with the back of the pond that includes a fair amount of rocky edges, consider making the front of the pond more aesthetically-inviting to draw people to the pond. You can place larger boulders on either side of the aforementioned beachy area and place medium-sized stones in the gravel to give it a more natural look.

To create a simple planting area around the edges of the pond, consider taking marginal plants and sticking them between already placed boulders. The plants will begin to grow between the rocks, which will give the area a pop of color, and the roots will help anchor the rocks in place. 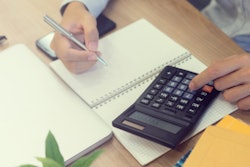 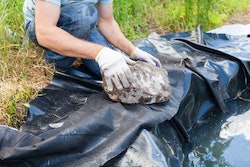 How to: Tips and tricks for building a pond 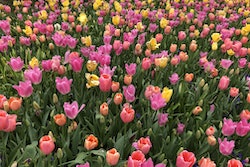 What to do with spring bulbs after they’ve bloomed 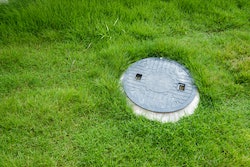 Plants for landscaping around septic tanks