History in the making: Landscaping and maintaining historic sites 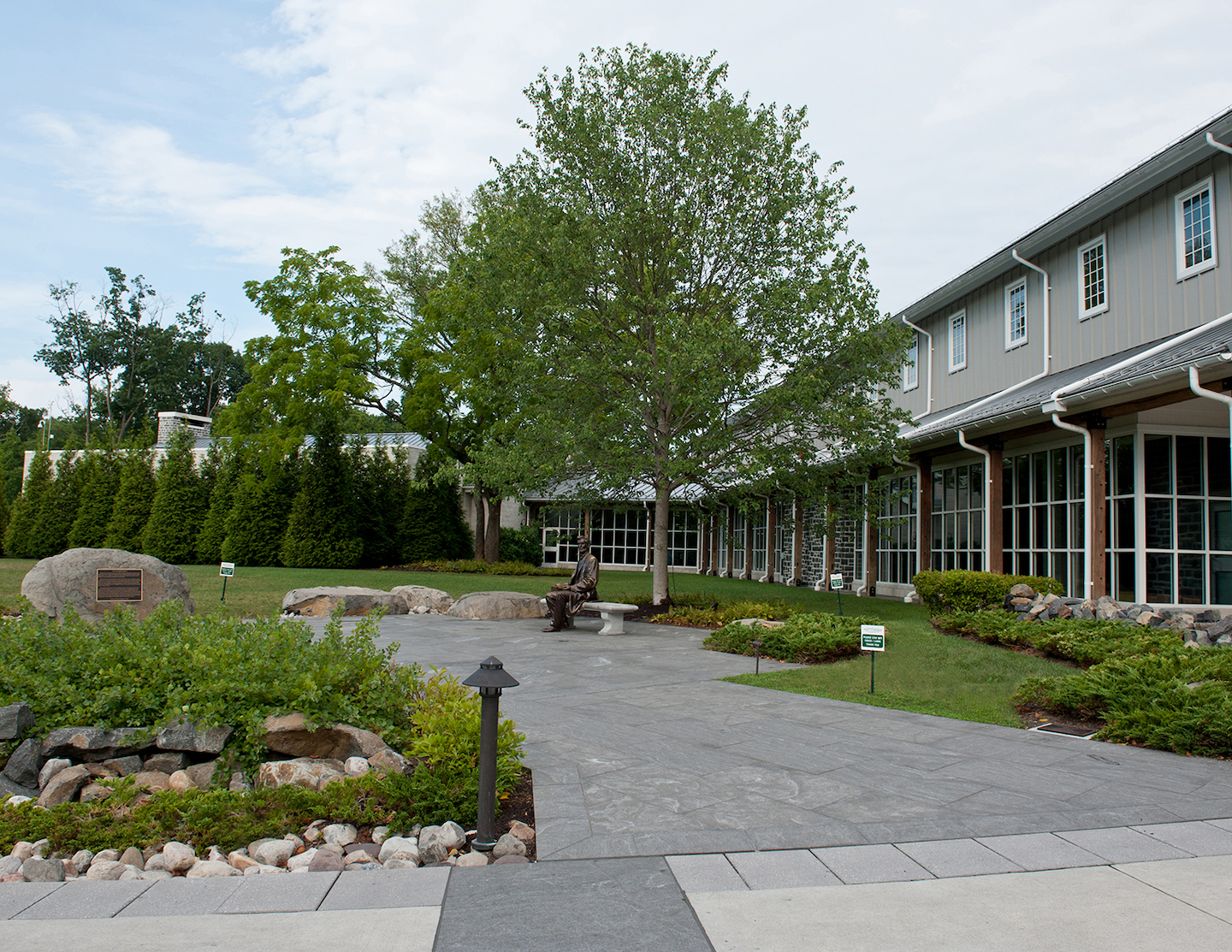 Gettysburg Museum & Visitors Center: This 40 ft. tall October Glory Maple, which is one of the project focal points, was intended to be what battlefield guides term “a symbolic witness tree,” meaning that they are now mature trees who likely witnessed the battle.
Photo: Ruppert Landscape

Maintaining and protecting your customer’s landscape certainly comes with its own set of challenges, but when it comes to working with landscapes that are deemed historic, the processes can become even more detailed and the challenges a bit more unique.

If you find yourself in a position to work on a site that’s considered historic, take a look at what makes a site historic, as well as the specific preparation that must be undertaken to perform landscape installation and maintenance work on it.

“They are composed of a number of character-defining features which, individually or collectively, contribute to the landscape’s physical appearance as they have evolved over time,” the NPS says online. “In addition to vegetation and topography, cultural landscapes may include water features, such as ponds, streams and fountains; circulation features, such as roads, paths, steps and walls; buildings; and furnishings, including fences, benches, lights and sculptural objects.”

A historic property, the NPS says, will include all its cultural resources, like landscapes, archeological sites and collections and buildings, but in some cultural landscapes there could be a complete absence of buildings.

According to the NPS, a historic designed landscape is one that was designed consciously or laid out by a landscape architect, master gardener, architect or horticulturist according to design principles, and aesthetic values will play a major part in these types of landscapes.

The next category is historic vernacular landscape, which the NPS says are landscapes that evolved through use by the people whose activities or occupancy shaped that landscape, and function will play a key role in these types of landscapes.

“Through social or cultural attitudes of an individual, family or a community, the landscape reflects the physical, biological and cultural character of those everyday lives,” the NPS says online. “They can be a single property such as a farm or a collection of properties such as a district of historic farms along a river valley.”

Historic sites, the third category, are defined by the NPS as a landscape that’s significant for its association with a historic event, person or activity, such as battlefields and president houses or properties.

The final category the NPS lists is the ethnographic landscape, which is a landscape that contains a variety of natural and cultural resources that associated people define as heritage resources. The NPS says that examples are massive geological structures, contemporary settlements and religious sacred sites.

After your landscaping company has determined what kind of historic site you will be working with, then comes the process of planning how you will manage the site.

According to Ken Thompson, director of quality and efficiency in Ruppert Landscape’s Landscape Construction Division, there are a few challenges that landscapers must face when working on historic sites that might not occur when working a typical residential or commercial job.

For example, Thompson notes that many of these historic sites are located in public spaces, which must be kept open to the public even during the times the landscapers are performing renovations and maintenance. This, he says, means that landscapers must be extremely careful and vigilant in their safety practices, while also ensuring they do not impede on the public’s access to the space.

He says that this can sometimes impact the scheduling and timelines of the landscapers, as they are forced to work around visitor hours, and often, they will need to work nights, weekends and during inclement weather to make sure projects are completed on time. He also adds that these historic sites maintain strict security and access practices.

“Many of the historic sites we’ve worked on have had strict security measures in place, requiring personnel to go through a security approval process and have identification to enter the site and sometimes even a security escort while there,” Thompson says. 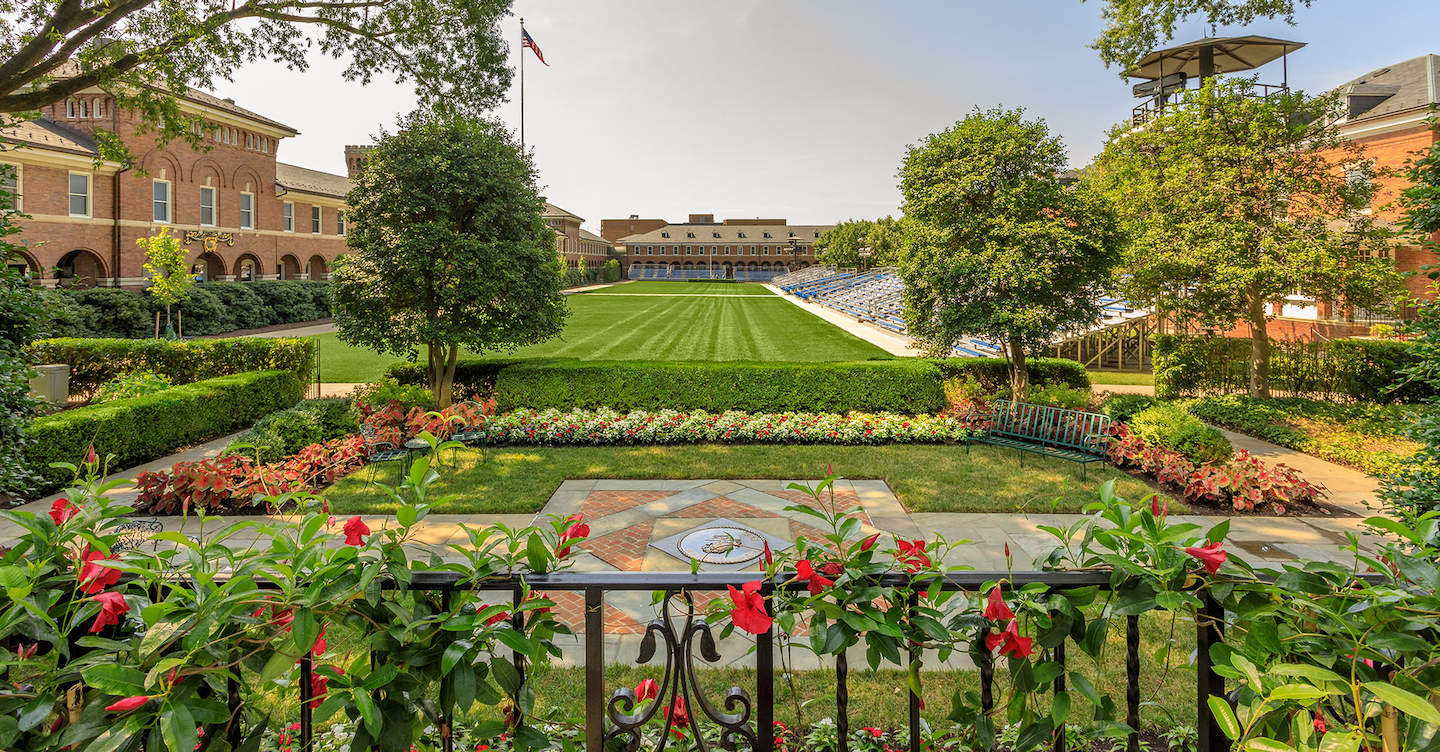 Because parade season starts a month earlier than a typical spring installation, Ruppert elicits the help of growers to custom grow annuals, ensuring viability and availability for installation at the start of parade season in late April. Plant material is rotated out as soon as it starts to fade, requiring several rotations a year.
Photo: Ruppert Landscape

When performing landscape maintenance on the Marine Corps Barracks Washington at 8th and I in D.C., Thompson says he and his team had to maintain the site with military precision, including crisp lines, neat hedges, clean beds and perfectly manicured turf, especially on the parade deck.

“There are many high-profile functions held with high-ranking military and government officials in attendance, necessitating attention to detail and quick turnaround on last-minute requests,” Thompson says. “Which can range from fixing a piece of turf that was damaged during practice, to replacing entire flower beds, to emergency irrigation line repairs right before a parade.”

“When moving large material, we are often limited in the type of equipment used; we can’t always use a crane for fear of damaging priceless historic property in any way,” says Thompson. “Sometimes, we are left with non-traditional methods like sliding material across the ground on blocks of ice and allowing the ice to melt in place. More often, we try to set up partial deliveries then construct material on site, such as large statues or structures.”

A third challenge Thompson has faced deals with working with mature plant material.

In many historic projects, Thompson says, the designs will require larger or more mature plant materials to make sure that replacements in areas of existing historical significance will still look natural and like they’ve been there many years instead of looking newly installed. Because of this, Thompson says the material can sometimes prove more difficult to move and source. 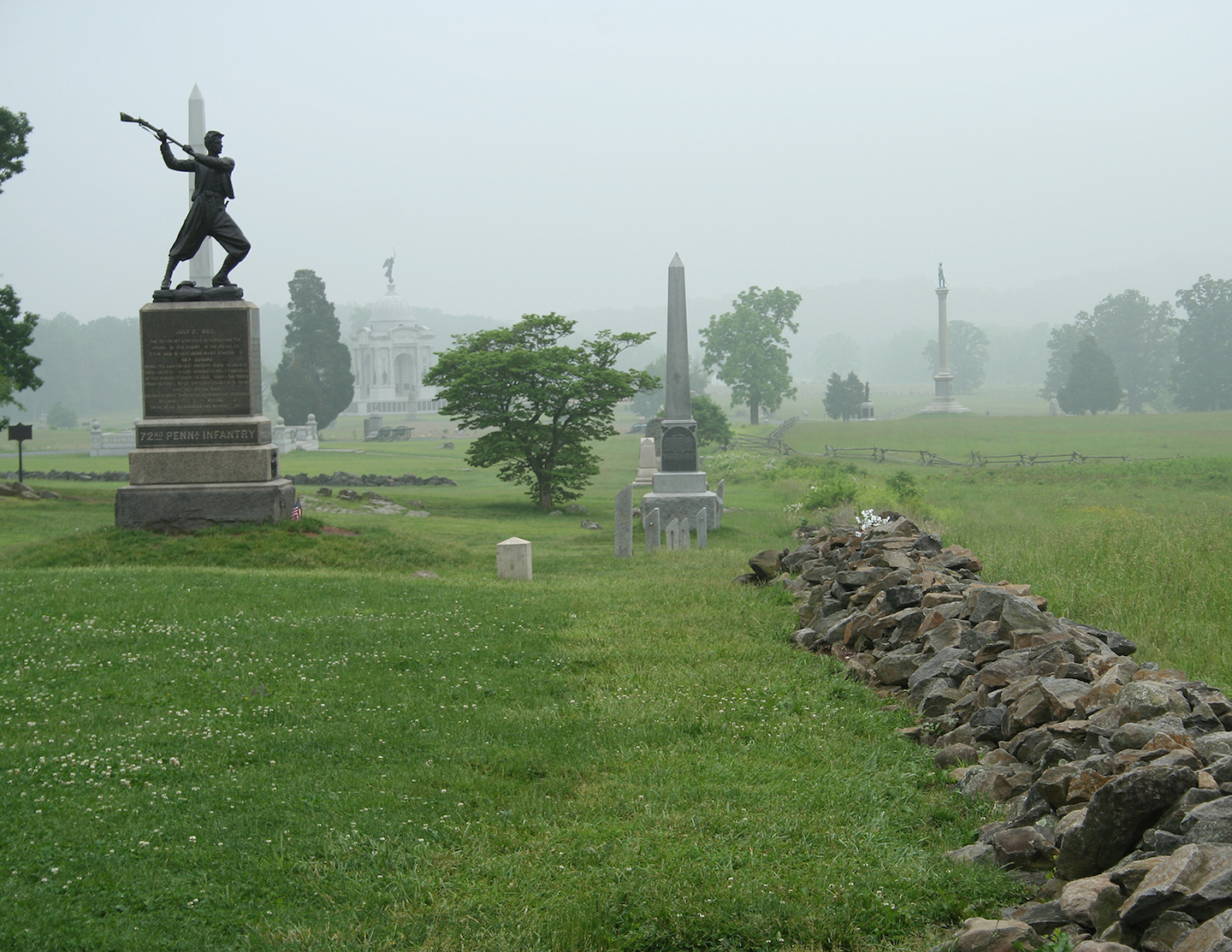 Throughout Pennsylvania and other nearby states, stone walls originally created by farmers as they cleared their fields of stones were used as skirmish lines on the battlefield. These same design elements were echoed along walkways in and around the visitor center both for visual effect and to stabilize the slope and control erosion. Forty tons of local quarried rocks and boulders were used to create stone rubble walls, and river rock was installed to eliminate drainage issues.
Photo: Ruppert Landscape

Similar to using more mature plant materials is the task of matching existing hardscape material in the site.

Often, Thompson says his team is asked to use hardscaping materials that match existing historic walls, walkways and structures, and he adds that sourcing granite, cobblestones and brick that matches the look of the existing material can sometimes prove challenging.

“Sometimes, they can be ‘tumbled’ to create an aged effect, for an additional cost and time investment,” Thompson says. “The submittal process can be long and arduous, making sure that the landscape architect is happy with the materials chosen and that they match the historical aspects of the site.”

One project in particular that Thompson can recall having to match existing materials and work with mature plants came when he worked on the Gettysburg National Military Park Museum and Visitor Center in Pennsylvania.

Thompson says in an effort to return the battlefield to its original state and relocate the existing visitor’s center to an area that saw no major battle action, the NPS and the Gettysburg Foundation undertook the construction of a new 139,000 square foot visitor’s center.

The final challenge Thompson has experienced when working on historic sites is having multiple decision makers on site.

Generally, Thompson says his team is accountable to a general contractor/developer and their chosen landscape architect or designer, but when it comes to restoring historic sites, there can often be more decision makers involved.

“Depending on the source of the funding, anyone from the benefactor, to local/state/federal government agencies, to historical societies might be involved in the decision-making process,” Thompson says. “This often requires patience and creative solutions to challenges and makes the need for timely, thorough communication that much more important.”