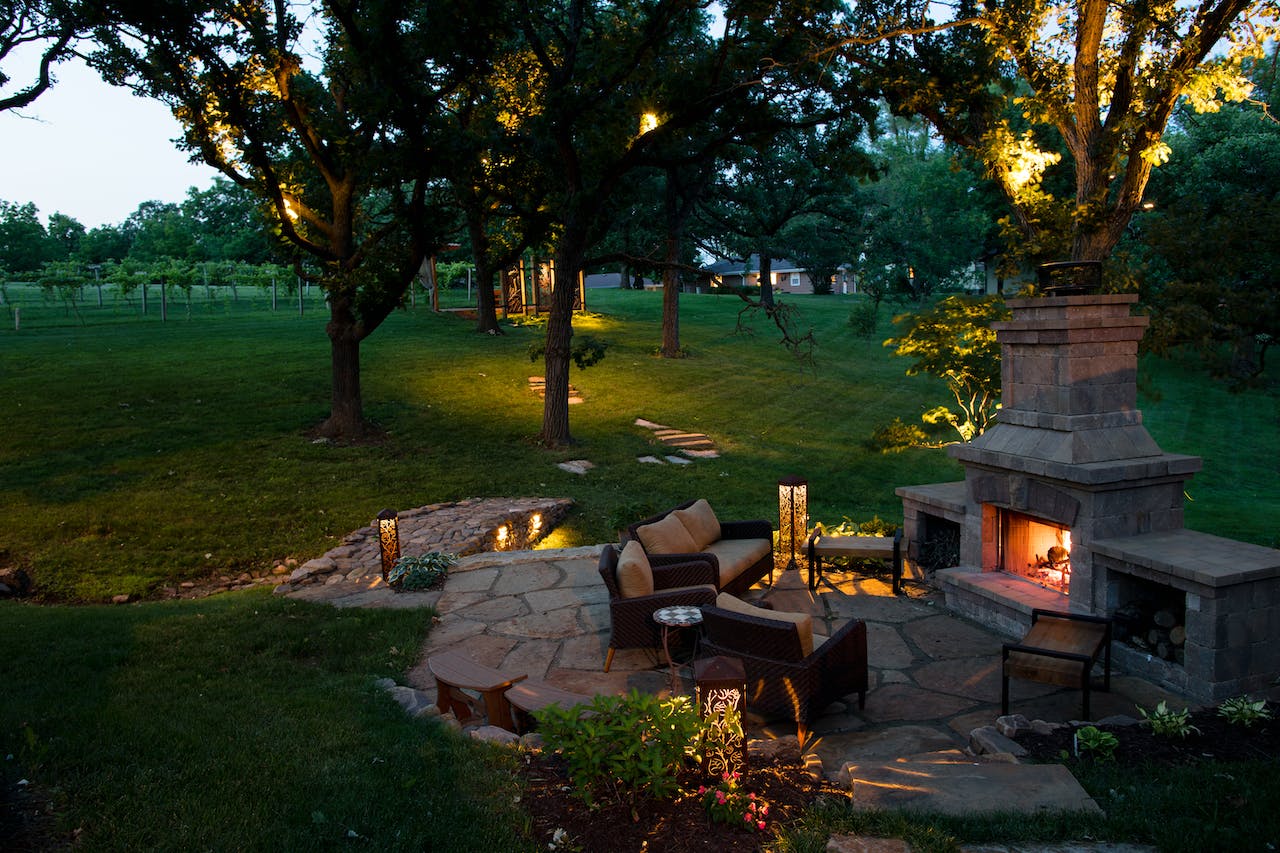 Many landscape features appeal to both children and adults.
Photo: Sun Valley Landscaping

Outdoor living spaces have been a trend for years now but striking a balance where everyone in the family can enjoy the backyard at the same time is truly an art.

“When you’re dealing with families, you’re trying to focus on bringing the family in to be a part of the landscape design,” says Henry Turner, owner and president of Esterline Landscape, based in Plant City, Florida. “With a family, you’re trying to incorporate not only children but also pets and family members that often come over. So, we try to get everybody involved when it comes to a family landscape.” 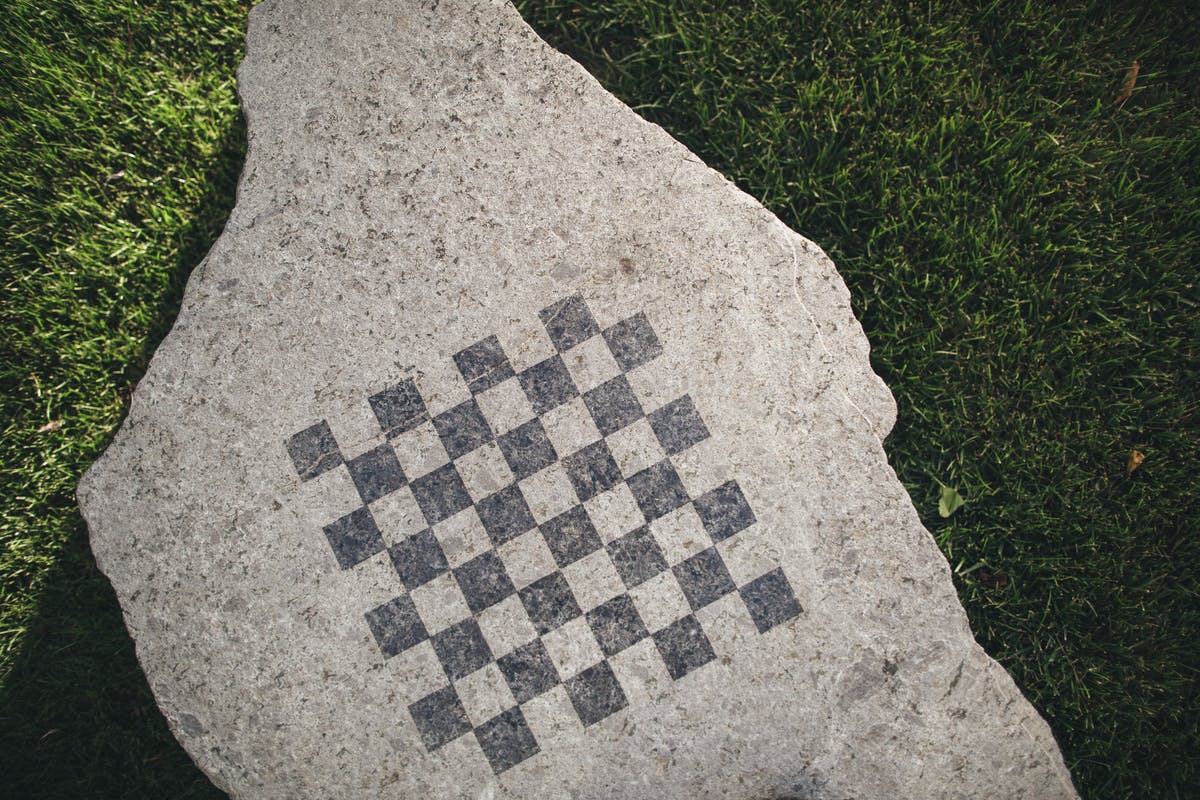 Sun Valley created a chess board for one client who enjoyed playing chess with his grandchildren.
Photo: Sun Valley Landscaping

The key to creating a successful family-focused landscape is to focus on the future, instead of simply the here and now. While a swing set may be present for a time, you must always be thinking about what that space will be in the next five or 10 years.

As you craft your landscape design with a family in mind, make sure the space can adapt as the children age. Turner says he often talks with clients about how to create a landscape that will mature with the family.

Like any landscape design process, the first step is to ask the family questions and figure out how they plan to use the space. Asking questions about what sort of hobbies the family enjoys doing together can get the ball rolling.

“We try to find out for the kids what kind of sports they’re playing,” Turner says. “If we create an area where they can utilize the backyard, to practice and to develop themselves in that sport, then we like to take that consideration.”

Like Turner, Sun Valley Landscaping in Omaha, Nebraska, also makes a point to take the kids’ input into consideration for the landscape design. Paul Fraynd, co-owner of Sun Valley says their foreman, Jerrod Combs, will become the kids’ and dogs’ best friend while working on a job and will seek their opinion on things. 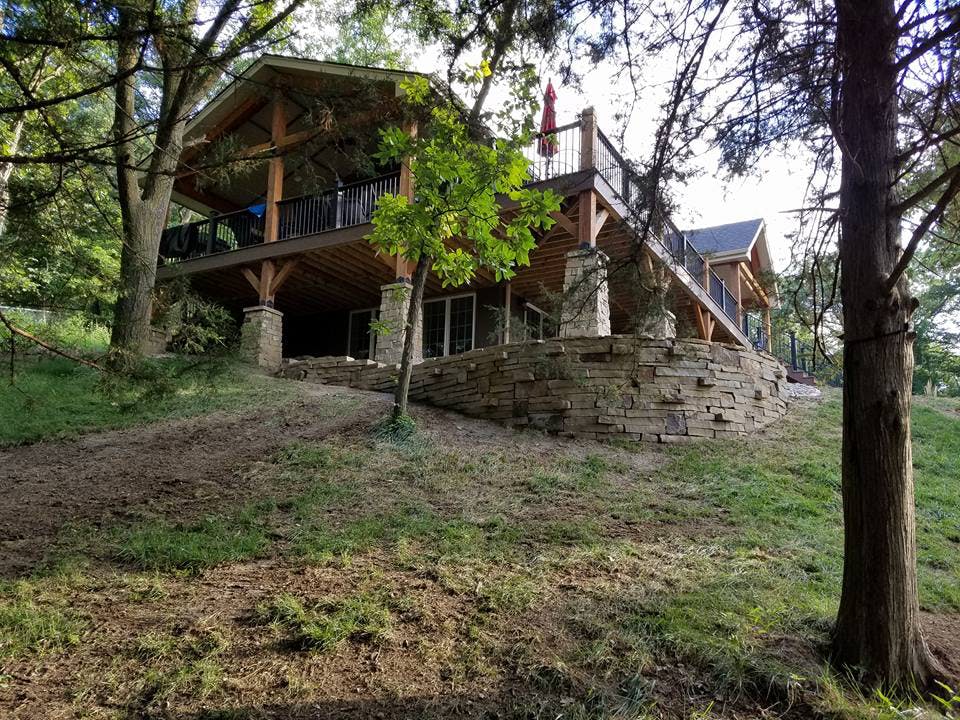 Sun Valley included hand holds on this retaining wall at the request of the children.
Photo: Sun Valley Landscaping

“When he’s building a retaining wall with natural stone, they’ll design it so that a kid can climb up there,” Fraynd says. “There’s little ledges and little spaces that the kids can explore so it’s not just this rigid retaining wall that’s for a very utilitarian purpose, it’s also an area you can explore and have adventures in and stuff like that.”

Fraynd adds that the wall was three feet tall. He says whenever there is some height to a wall or ledge they will put turf below it so if a child does fall, they’ll fall on a soft surface.

“If you can put yourself in the shoes of, not only the adult that you’re talking to but also the kid and look at it in their eyes and see what would make you want to get outside and enjoy it, I think that’s probably the biggest thing is just being empathetic and asking all the questions for all the stakeholders, if you will, of who’s going to be interacting with this space,” Fraynd says.

A major factor to keep in mind when designing for a family is the general safety of the property. One easy way to ensure safety is to be cautious when it comes to selecting plant material. Thorny or poisonous plants should be avoided at all costs. Turner points out that while oleander is a beautiful plant, it is poisonous to children and pets. “We try to steer the customers into stuff that is going to be friendly, not only towards the pets, but towards their kids, and make sure that we reduce any kind of risk or accidents that might occur the backyard due to the plant material,” Turner says.

Clear lines of sight should also be incorporated into the design.

“I think that a lot of parents enjoy being able to drink their glass of wine or read their book or whatever, and be able to watch their kids play,” Fraynd says. “Keeping good lines of sight is another very practical thing.”

“If we’re creating an outdoor living area around pools, you definitely want to make sure you don’t put any kind of material that’s going to obstruct the vision or the view of the pool area,” Turner says.

Other safety aspects depend on the ages of the children and the elements involved. For instance, if your customer in Omaha wanted to have a koi fish pond, the feature would need to be at least four feet deep, which isn’t an ideal element to include if the homeowner has a three-year-old.

Fraynd also advises against installing fire pits below grade, but rather have them a proper height that will reduce the chance of child burning his or herself.

Depending on the family’s wants and needs what you end up including in the landscape design will vary greatly but Fraynd says a very common request from homeowners is a lot of green space so the kids can play a variety of sports.

While some customers are well-aware that certain elements, like playhouses or slides, will eventually be removed and the landscaping company will have to come back in and create something new, Turner says it usually comes down to the budget and what the homeowner values. 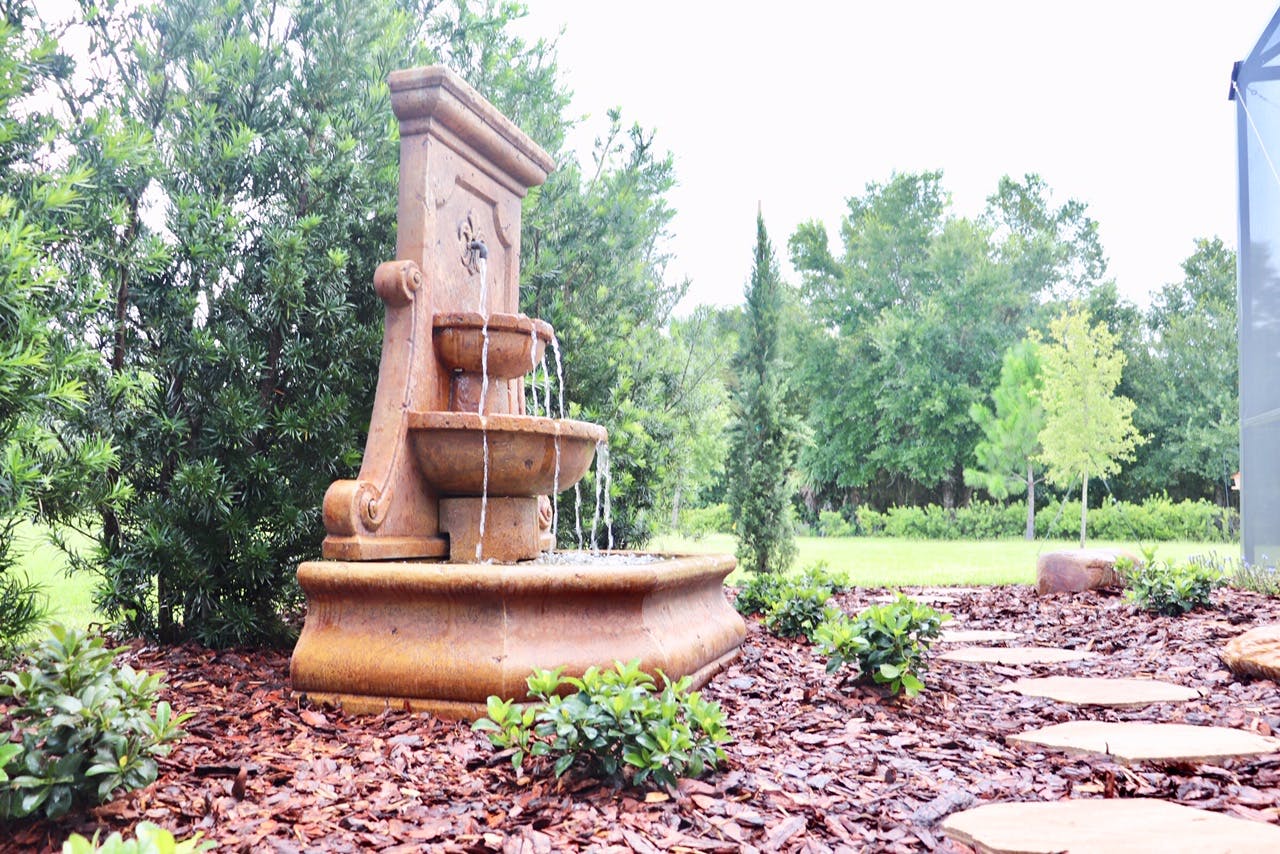 Water features are just one of the elements kids like to interact with.
Photo: Esterline Landscape

Surprisingly, there are actually a number of landscape elements that can be included that appeal to both children and adults such as water features, vegetable gardens, games and fire pits.

“We found that some of the elements are very similar,” Fraynd says. “Kids love fire pits. Adults love fire pits. It’s a great way for them to bond. They can do their s’mores and all that kind of stuff around the fire pit.”

Fraynd says a good rule of thumb is anything kids can interact with, they tend to enjoy, like digging in a vegetable garden or playing with a shallow pond. Opting to have games like bocce ball or cornhole allows the whole family to enjoy them over a number of years.

“Another cool one is to think of planting a tree; when a child is young and that tree grows up, everybody remembers the tree that they grew up with in their front yard or backyard,” Fraynd says.

Fraynd says it’s important not to forget functional elements like storage and screening.

As the children age, having separate entertaining areas for adults and teenagers can provide fun spaces where they can each hang out with their group of friends.

“We make things flow, but yet we create a little bit of privacy with, say, shrubbery or something like if the kids are playing a separate game,” Turner says. “Based off the clients that we meet with, they might have times that when they have a party or an outdoor function and they have kids that come over, but they want to separate themselves from that. So, that’s a matter of us being able to create spaces with buffers and things like that.”

Patios with pergolas and outdoor kitchens are some other options that provide an inviting space for the entire family. 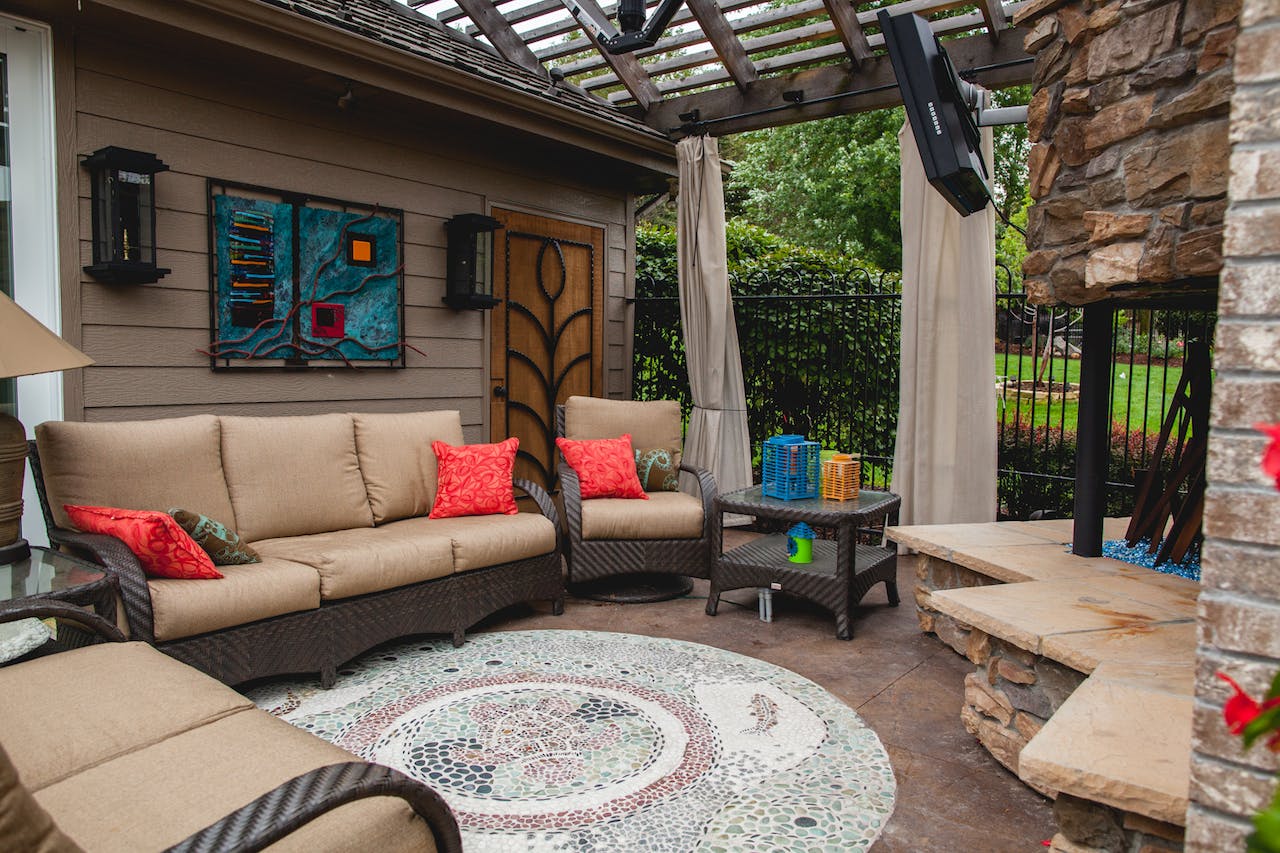 Including all the amenities one would find indoors, can entice families to spend more time outside.
Photo: Sun Valley Landscaping

Fraynd agrees that the backyard should become another family gathering space just like the living room or kitchen where they can bond and make memories.

“I think when you get outside kids and adults are have very similar motivations and things that make them smile,” Fraynd says.

When it comes to elements to avoid in family-friendly landscape designs, it’s best to not make it too formal, otherwise, children will feel it is too perfect and it can’t be interacted with.

Another solid piece of advice is to not make it too difficult to get to where you want to go. Fraynd says kids are like water and will go to the least point of resistance. Turner agrees that you want to provide easy access in outdoor living areas.

“You want to make, I always call it launch pads with kids because kids don’t follow set paths,” Fraynd says. “They go to the shortest possible way to get to the fun. So, if you have a patio, as an example, and all around it is a bunch of plantings and to get to the lawn you have to meander, well the kids are going to want to just run straight out. So just keep that in mind, to keeping spaces open and connecting things so you can get to where the fun is.” 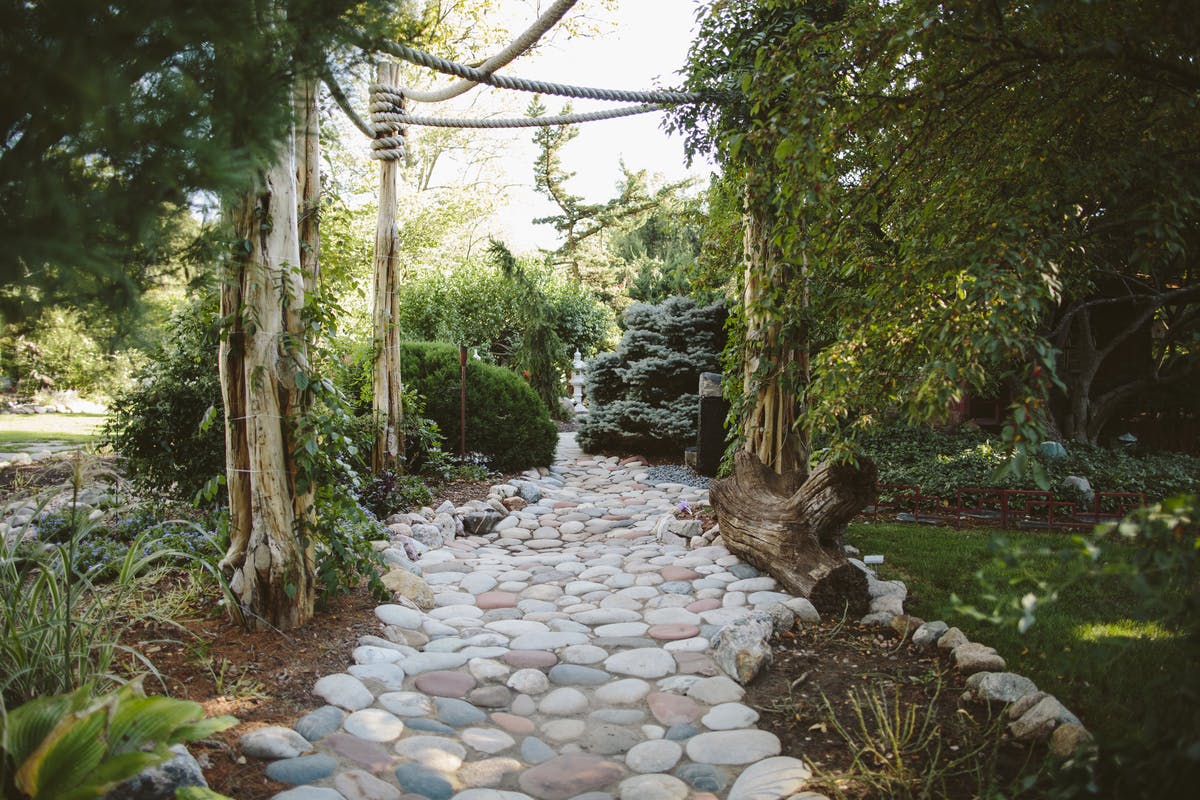 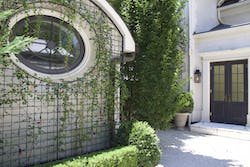 Looking to the future: What’s in store for Blackjack Horticulture 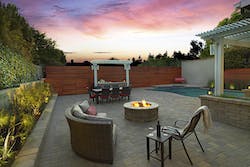 Making the most of interlocking concrete pavers 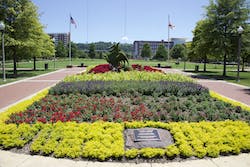 Getting your hands dirty: Out and about with the crews at Blackjack Horticulture 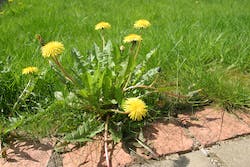