A 75-foot median strip in Los Angeles, California near Atwater Village has a diligent caretaker. Not a gardening club or government entity. It’s Jeff Harmes, a 46-year-old Colorado native who’s been homeless since he was a teenager. Los Angeles Times reporter Steve Lopez spoke with him about his personal beautification project and his life.

Harmes’ past was rocky. He was adopted at 5 months old, and his mom remarried after his father passed away. Unfortunately, his stepfather was abusive to him and his mother. He’s been on medications for depression with psychosis, which is probably what led him to a wooded area near a freeway.

I imagine this landscaping project is accomplishing a few things: it’s easing his mind, keeps his creativity and physical stamina up, gives him something to focus on, makes him feel important and needed and it’s helping the community at the same time. Surprisingly similar characteristics of anyone in the landscaping field.

That’s a lot of benefits from a one-man garden.

Thanks to donations of flowers, greenery and tools, he maintains the area with rock and seashell gardens, wood carvings and terraced landscaping.

And he has no gardening experience. Nope, none. He picked up a book and taught himself.

I hope creating this garden (and getting a part-time landscaping job as a result) is a huge step towards creating a better life for himself. 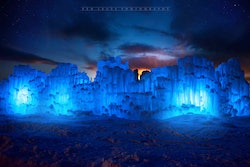 Watch a Utah field morph into a winter wonderland 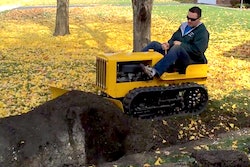 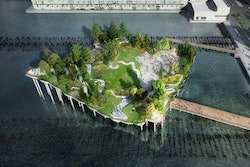 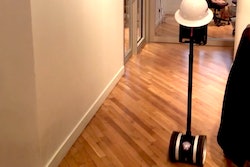