Landscapers discover their competitors are a bunch of animals

In July, three herds of goats will return to Boston, where they will eat plants that are poisonous to people, yet tasty to goats. In one week, four goats can eat through one-third of an acre of shrubbery.

Ryan Woods, spokesman for the Parks and Recreation Department, told The Boston Globe, “Bringing in the goats will let us open

those areas up, and we won’t have the noise from heavy machinery. They eat these plants and remove all of the harmful oils and seeds and produce a clean and natural fertilizer to the landscape.”

Earlier this month, according to The Brookhaven (Georgia) Post, the city of Brookhaven welcomed a herd of sheep to help clear the invasive growth of English ivy, privet and kudzu on three acres in Briarwood Park. And meanwhile, far north of Brookhaven in the city of Montreal, a former shepherd is urging city officials to consider using sheep to maintain green spaces, arguing the animals could also produce milk cheese in time for the city’s 375th birthday in 2017.

Since 1992, the city of Fort Saskatchewan in Alberta, Canada, has employed about 50 sheep to trim the grass in city parks, where people are invited to meet them during specified visiting hours. Auggie, the city’s mascot, can even be booked to appear at your next event.

Real estate website Movoto now offers an animal lawnmower calculator for homeowners to estimate the cost of hiring a goat, sheep, chicken, guinea pig or cow to trim and fertilize their lawns. 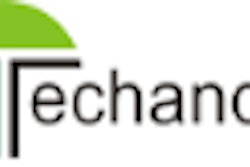 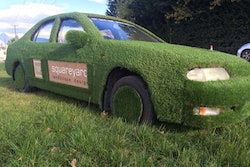 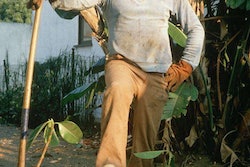 Are you reality TV’s next backyard landscaping sensation? 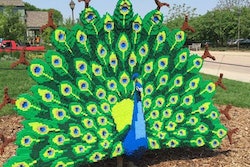 Watch for Legos in the landscape as art, nature connect at exhibition