Tucked away on East 53rd Street, Paley Park is dubbed the original “vest pocket park” and is one of the most admired pocket parks in the world.

Envisioned as a new form of public space that is privately owned, Zion and Breen Associates presented this proposal during a 1963 exhibition at the Architectural League of New York. Former chairman of CBS William Paley donated the site of the Stork Club for the future park and worked closely on the project.

The park was opened in 1967. It was financed by the William S. Paley Foundation and Paley named the park after his father. A plaque near the entrance reads: “This park is set aside in memory of Samuel Paley, 1875-1963, for the enjoyment of the public.”

Though only 1/10 of an acre, this park takes advantage of every inch of space it is given. A 20-foot waterfall is set against the back wall where 1,800 gallons of water cascade down per minute, creating white noise to drown out the sounds of the city.

Other sound-blocking features include the park being elevated slightly above street level, dense English ivy growing on the walls and a low tree canopy. A total of 17 airy honey locust trees were planted in 12-foot intervals and turn a lovely bright yellow in the fall.

Annual planting containers are also used to boost the plant palette. Because the comfort of visitors was key during the design, the landscape architects opted to use light, movable chairs and tables to provide flexibility for the public.

Sociologist William H. Whyte, who I mentioned in yesterday’s post, studied Paley Park’s social environment and even released a documentary about the space in 1980 titled The Social Life of Small Urban Spaces.

In his analysis, Whyte was looking for the reason why the park was successful and how it managed to draw people into its depths. He concluded that while an illusion of oasis was created within Paley Park, it is in a heavily traveled urban space and is able to lure visitors into its soothing sounds of water falling.

It’s no wonder why this 4,200-square foot park has captured the interest of so many. The space is almost Zen-like with its minimalist design, yet it still creates a refuge for those who need a break from their busy day. 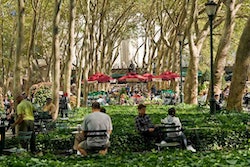 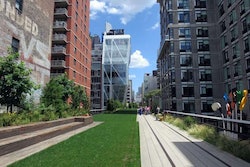 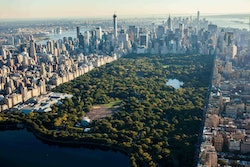 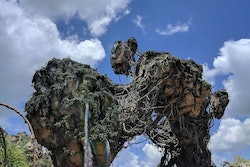