Summer has arrived, bringing with it heat and humidity to many parts of the United States. While expectations are high for aesthetic turfgrass during this time of year, these conditions make turf especially hard to manage because they invite disease. In fact, during periods of prolonged heat, rain and humidity, a disease such as brown patch can develop so quickly that it blights turf in a matter of a day or two.

Why so quickly? Because the fungi that cause diseases are always present in turf. It’s just a matter of the correct combination of environmental factors that tilt the balance, favoring the growth of the pathogen and increasing turf’s susceptibility to it. There are also management practices that can contribute to disease in turf, including mowing height, irrigation and fertilizer regimens. While this is true for nearly all turfgrass diseases, this article will focus on just one: brown patch disease.

Rhizoctonia is the fungus that can be blamed for causing unsightly patches of blighted turfgrass. It’s capable of killing most cultivated species of turf, and it is especially devastating to younger, immature turf. Turfgrasses that can succumb to brown patch include Kentucky bluegrass, centipede grass and fine fescues, but the most susceptible to attack are zoysia grass, St. Augustine grass, ben grass, ryegrass, annual bluegrass and tall fescue.

Some of these are cool-season turfs while others are warm-season ones. Brown patch can infect either. In cool-season grasses, brown patch will attack when the weather optimizes the pathogen’s growth during the summer months. In warm-season turf, the disease is more common during the early spring and late fall, as conditions for disease are rife in warmer climates during these times. Know that brown patch can occur when nighttime temperatures are higher than 70 degrees Fahrenheit and grass blades consistently stay wet for periods of more than 10 hours.

If the turf you’re managing is suffering from brown patch, chances are, you know it.

Symptoms, though, depend on turf species. Most commonly, brown patch starts as a few round patches of light-brown turf. In the beginning, these patches are only several inches in diameter, but they can grow to several feet in diameter on some grasses. And they generally have some green leaves within the patch. One of the primary diagnostic features of this disease is the purplish-gray “smoke ring” that often can be seen as a border on the wilted patch.

Obviously, you can’t control the weather. But your actions may be contributing to brown patch just as much as the rain and humidity. Researchers have identified several turf management practices that can contribute to turf’s susceptibility to brown patch.

If you manage a high-end commercial property, you may want to consider tracking brown patch in order to make preventive fungicide applications. However, for the average home lawn, outbreaks of brown patch are too sporadic to warrant preventive treatment. And cost considerations can prohibit treatment of any kind. However, there are some longer-residual fungicides that may make treatment less cost-prohibitive for you and your clients.

As always, make certain any formulation(s) of pesticide(s) you purchase are registered for the intended use, and follow the label instructions. 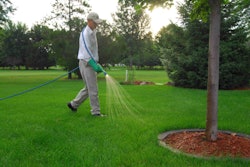 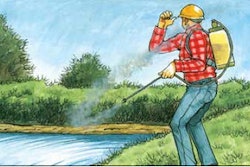