Crabgrass and goosegrass are two weeds that have adapted to a wide range of growing conditions. Despite regional differences in climates, you can find them throughout the United States. Some of you will battle these weeds each growing season; for others – especially those of you in the Deep South – crabgrass and goosegrass can be a year-round problem.

Both crabgrass and goosegrass are tropical grasses that like hot, dry conditions and climates. And like most weeds, they are opportunistic and gain a foothold in turf when turf is stressed. So during summer months where cool-season turf is growing, these weeds have an advantage.

While the cool-season turf wilts and thins, it creates the perfect opportunity for these weeds to move in and dominate, according to Kyle Miller with BASF Professional Turf & Ornamentals. It simply out-competes the cool-season turfgrass in warm conditions.

These weeds are annuals, meaning they germinate from seed when soil temperatures reach a threshold level. Both grow in warm temperatures and in the fall, as it gets cooler, they begin to seed and go dormant.

“When soil temperatures hit that threshold again the following year, the cycle starts again and they germinate from seed,” Miller says.

The main difference between crabgrass and goosegrass is their timing of germination. Crabgrass usually germinates a month or so before goosegrass because soils don’t have to be quite as warm as they do for goosegrass, Miller explains.

“What that means is that in areas where you have a lot of goosegrass and crabgrass problems, you need to time your herbicide application to pick up the goosegrass,” he says. “You almost have to make two applications in order to properly control the weeds.”

Pre-emergence herbicides that are commonly used to treat crabgrass and goosegrass are pendimethalin, prodiamine and dithiopyr. You can choose from liquid or granular formulations.

“As a rule, both (liquid and granular) perform similarly because manufacturers have determined the proper spread rate and loading of the product on granules. They’ve perfected the science,” Miller says.

He points out that the choice is all about convenience more than anything. Liquid products are usually less expensive; however, some lawn care companies don’t like spraying because it involves water, mixing and a larger vehicle with a tank. On the other hand, granules are more expensive, but require only bags of a product and a spreader.

“Many people historically apply product because they’ve been doing it for so long ‘at about this time.’ They think they’re getting product down before weeds begin to germinate, but this is unreliable,” Miller says. “Others use the indicator of when certain plants bloom and assume soil temps are at an approximate level. That can shift though – they may bloom and there may still be a cold spell.”

Your best bet is to check online for soil temperatures in your area, or monitor them yourself with a soil thermometer, he says.

Post-emergence herbicides commonly used to treat crabgrass and goosegrass are quinclorac and fenoxaprop. Both of these are liquid products and Miller points out that there are not really any granular products to treat these weeds post-emergently at this time. Timing with this type of herbicide is much more flexible than that for pre-emergents. You can treat after the weed has emerged and is actively growing.

If you’re looking for one product that will control both crabgrass and goosegrass, Miller recommends using one of the pre-emergence herbicides listed above. Remember, though, that even though you’re using the same chemical to treat both, you’ll need to make two separate applications (one for crabgrass and one for goosegrass) because of the differences in their germination periods. But if you want to treat weeds that have already popped up (post-emergently), know that only fenoxaprop will control both.

Another option is to choose a chemical control for these weeds that also contains a fertilizer.

“Pre-emergents and fertilizer are routinely blended together,” Miller says. “Companies have perfected the load and spread rate so that liquid and granular applications are similar – we don’t see a big difference.” 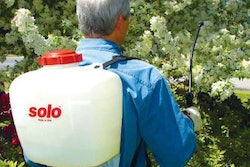 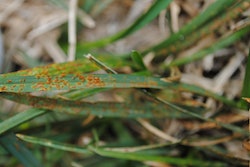 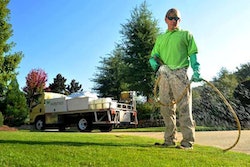 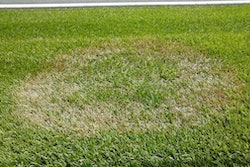