Cole Deason, owner of Cut-N-Edge Unlimited in Coker, Alabama, has tested several machines and new equipment for Total Landscape Care in the past. So when Vermeer approached us about putting a S400TX compact utility loader into his hands, Deason was intrigued. “I’ve been shopping around for a small loader,” he says. “But I’d been focusing on diesel power. The S400TX is powered by a 23-horsepower Kohler gasoline engine, and I was curious to see how it would perform out in the field.”

Vermeer was generous with their offer: When the loader showed up, it included a new trailer to tow the machine complete with a host of the company’s latest landscaping attachments, including an auger, landscape rake and trencher – to name a few.

Once on the job, both Deason and foreman Mike Garett were impressed with the machine. “It out-lugs our older, full-sized skid steer,” Garett notes. “Even with a gasoline engine, it’s noticeably more productive than the ride-on machine when we use it to cut a trench. The attachment change-out system is well thought out and hassle-free, which is always a good thing when you’re busy and in a hurry.”

“It’s got plenty of power,” Deason concurs. “I’ve been most impressed with the controls on the machine, since that’s one of the features Vermeer really talks up about the design. They’re laid-out in logical pattern and very intuitive to use. I’d say we were up to speed on operating the machine effectively inside of a single day.”

“Since we’ve been demo-ing the machine, I don’t think we’ve used a hand-shovel or rake,” Deason notes. “I can start out with my largest skid steer, and work my way down to successively smaller machines as the job gets more complex and confined. By the time I’m down to the delicate, close-in finish work, we’re pretty much using the S400TX exclusively. So it could be a logical addition to my equipment fleet.” 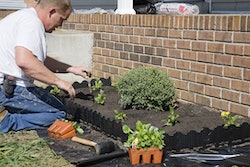