Ditch Witch brought something new to the table at this year’s GIE with the introduction of the SK3000 stand-on skid steer.

As the company’s most powerful and largest stand-on skid steer, Ditch Witch says this machine can handle the tasks typically reserved for traditional skid steers and compact track loaders (CTLs).

“The SK3000 is our first entry into the full-sized, stand-on skid steer,” says Chris Thompson, Ditch Witch product manager, compact equipment. “In every way, it’s like a full-sized skid steer with horsepower, lift capacity, etc. So, the idea was that we’d been making these other skid steers for a long time, and people kept asking for more capabilities.”

Unlike other brands with similar products, Ditch Witch notes that its skid steer does not have a cage over the operator, as the company believes that cuts down on mobility, visual range and machine capability. This design, according to Ditch Witch, offers operators the convenience of not having to climb in and out of a cab, increased maneuverability over traditional models and 360-degree visibility.

“People are having a hard time believing this because there’s not a cage, but it’s really safer,” says Thompson. “The number one injury on getting in and out of a skid steer is having to climb over the front. People get hurt all the time doing that, or sticks fall in front of them and they get trapped in the cage and have to have someone come get them out. On ours, if something bad were to happen, you just step off.”

Thompson says the company performed numerous safety tests to ensure the load could not be thrown back onto the operator.

With a lift capacity of 3,100 pounds and a 59-horsepower engine, Ditch Witch says the SK3000 is the most powerful stand-on skid steer in its class. The company says the machine can also direct up to 51 horsepower to attachments, and it delivers 5,500 pounds of breakout force to help operators lift heavy loads with a bucket.

Thompson adds that the SK3000 weighs only 7,600 pounds, which makes it more maneuverable and easier to transport.

“What we’re seeing is professional landscapers will bring two machines to a jobsite,” says Thompson. “They’ll bring one to unload the truck and move the material and another for the actual work. What we’re trying to do is make a machine that can do both.”

The SK3000 comes with an optional dual self-leveling kit that the company says keeps loads level as they are raised or lowered, and its 332-square-inch operator platform helps add comfort to operators while working.

Ditch Witch adds that the SK3000 can also boost job productivity with its advanced hydraulic system. It comes with an 8-, 14- and 22-gallons-per-minute flow setting, which allows operators to select the right flow for each job. Thompson adds that the hydraulic-operated attachment pins also simplify the process when swapping attachments – and operators don’t even need to get off the machine to swap non-powered attachments.

“When you go to disconnect your attachment, instead of having to go down and pull a lever, you hit a button on the machine and it disconnects for you,” says Thompson.

The SK3000 is set to go into production next month. 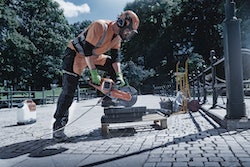 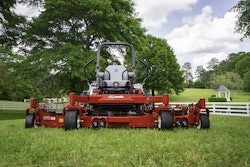 Exmark launches gas-powered 96-inch deck mower, along with other products 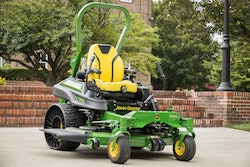 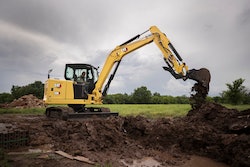