Ever seen what looks like a tiny wheel loader with a green coat of paint running around a local jobsite or a booth at ConExpo and wondered “What the heck is that thing?”

It’s likely one made by Avant Tecno, an equipment manufacturer based out of Finland. While the company refers to their machines simply as “wheel loaders,” these machines really represent a mashup of the compact wheel loader and skid steer with an articulation joint thrown in.

In the video below we give you a full breakdown of the Avant loader lineup and spotlight a couple of specific models. Check it out. Or, if you prefer text, you can read on after the break.

Let’s look at the Avant 635. Calling this machine compact doesn’t really do it justice. It’s tiny, weighing in at just 3,400 pounds.

Compare that to a typical compact wheel loader, the smallest of which usually weigh in somewhere between 9,000 and 10,000 pounds. Now, Avant has larger machines, but none of them are heavier than 5,600 pounds.

So just in terms of size alone you’re dealing with a very different machine than what are typically called “compact wheel loaders” and those are just the surface differences. We’re going to get into more specifics on a couple of Avant’s loaders—including the newest and largest of the bunch in the 860i—but first let’s talk about the Avant lineup and what makes these little loaders so special.

We’ll start with articulation. As their size suggests, Avant’s loader lineup is primarily aimed at smaller tasks, tight jobsites, indoor jobsites, you get the picture. And while these loaders are small to begin with and thus very maneuverable, that articulated joint makes them even more maneuverable.

An important distinction though is that while these loaders articulate, they don’t oscillate, or roll, at that articulation joint. When the machine is articulating on a slope, both the front and rear portions remain at the same angle. That’s because another important design factor for Avant is stability. And boy are these things stable. While at ConExpo an Avant employee parked a loader across a slope, got out and hung from the side of the rear cab post—and then began yanking and pulling. The loader didn’t budge. (You can see that demo in the video above.)

Beyond the absence of oscillation, the other reason these machines are so stable while working on slopes is that they have a really low center of gravity and, as Avant’s Matt Jarck told me at ConExpo earlier this year, 70 percent of the weight on these machines is located in that rear portion.

With the drive motors, the engine and the transmission located below and behind the operator, the machine stays really well balanced even when carrying a load while traversing a slope.

The other half of that “multi-tool articulated loader” description Avant uses for its machines is the “multi-tool” part. The company currently offers 200 attachments for these machines and they include a lot of what you’d expect. Various types of buckets, forks and brooms.

But there are more specific attachments too like trenchers, backhoes, concrete mixers, snowplows, snow blowers, several different types of mowers as well as lawn aerators, rippers and breakers.

And then there are some very specific tools like a beehive mover or an ice rink scraper blade, or a bale splitter.

They even make a rotator fitting that lets you rotate your attachments for even more versatility and they offer power tools that interface with this system.

Another aspect of these machines that Avant capitalizes on through attachments is their pushing and pulling power. The company offers a hydraulic rear hitch for towing and offers both a ball hitch and a three point hitch adapter for placement on the front of the machine. With that front hitch you can push or pull trailers and with that three point adapter you can pull farm tools and even lift them.

A couple more notes on these attachments. Though Avant offers 200 of them, not all are compatible with every loader the company sells. Plus they’re all hydraulically powered. Avant’s auxiliary hydraulic flow for the lineup ranges from 7.9 to 21 gallons per minute. 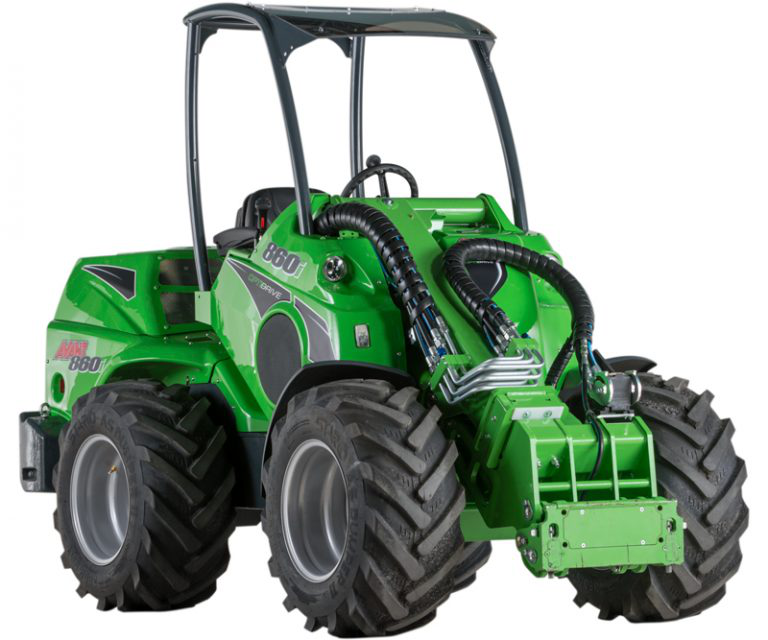 So when you combine the Avant lineup’s size, weight, maneuverability and the enormous amount of tools at your disposal this becomes a very intriguing alternative to a compact wheel loader, a compact track loader or a skid steer. The comparison is especially apt when considering that a good chunk of the Avant lineup offers between 1,000 and 3,000 pounds of rated operating capacity. However Avant offers all the way up to 4,190 pounds capacity.

Another machine type that at least a portion of the Avant lineup stacks up well with is the mini skid steer. Those machines too are quickly gaining popularity among small contractors, farmers and landscapers.

But if we’re just comparing them to traditional skid steers, beyond the lower weight, another advantage to these loaders over a skid steer is their articulation which Avant says virtually guarantees that it won’t tear up grass.

Obviously that makes these machines very attractive to landscapers, municipalities, parks and rec departments, and cemeteries. But Avant also aims these machines and produces attachments for farming, snow removal, tree removal, construction and demolition as well.

In fact, when you look at all the things Avant is bringing to the table here, it’s pretty easy to understand why Bobcat recently introduced its own pair of machines into this category called the Bobcat SAL or Small Articulated Loader.

Avant is a Finnish company and entered the U.S. market less than 10 years ago in 2012. Jarck tells me the company’s U.S. operation has been growing at rate of 20-25 percent each year, but even still, they hold a small foothold in the U.S. market. So, they were a bit flattered at Bobcat’s entry to their market and feel it’s evidence that they’re making a strong impression here. 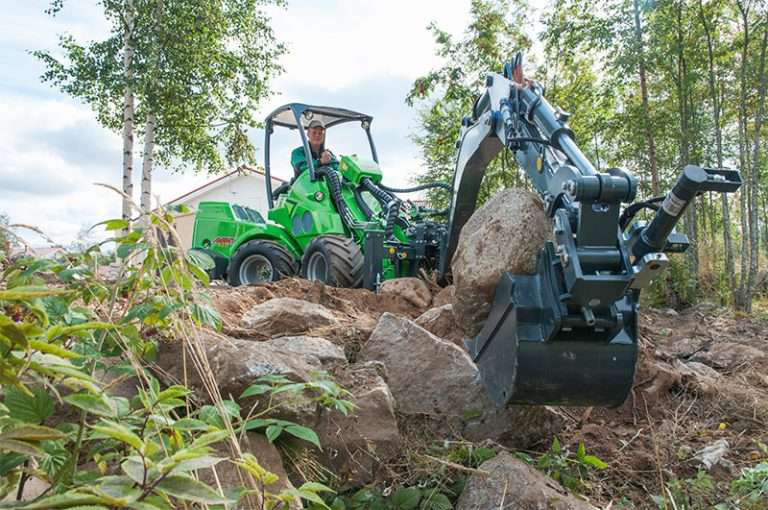 So now that we’ve got a handle on what the Avant loader is and what it’s capable of, let’s talk about a couple of specific models.

We’ll start with the Avant 635. This is a 26-horsepower hydrostatic drive machine powered by a Kubota diesel engine with 2,500 pounds of lift capacity.

Lift height tops out at just over 9 feet and the machine is capable of a top speed of 9 mph.

The 635’s max breakout force is 2700 pounds and like the other two loaders in the Avant’s 600 series, it has a standard telescoping boom. It has 17.4 gpm of auxiliary hydraulic flow. 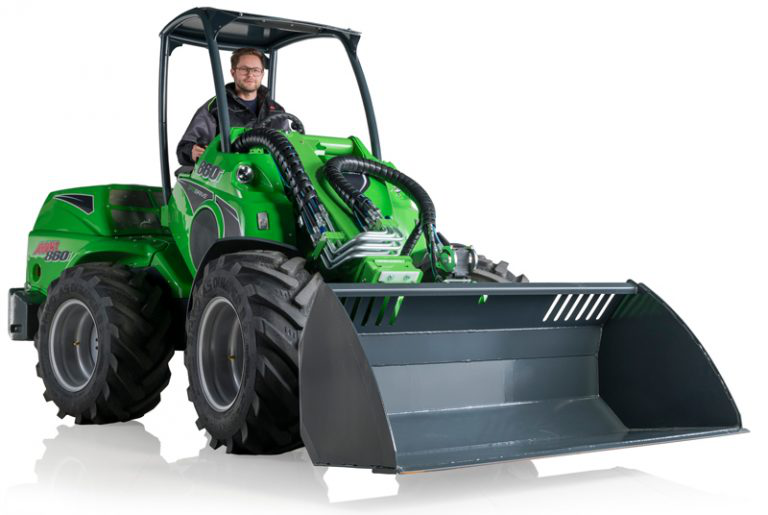 Now if you need more of everything, there’s the 860i.

This is Avant’s latest diesel-powered model and it’s also the largest machine the company offers.

The 860i also has a standard telescoping boom and max lift height with this machine is about 11 and a half feet and top speed is 18.6 mph.

In addition to the hundreds of attachments Avant offers, they also offer a ton of options and accessories on their loaders. On both the 635 and the 860i that we’ve talked about here, you can opt for an enclosed climated controlled cab, boom float and self leveling, additional auxiliary hydraulic outlets on the rear and on the front, counterweights, tie-down brackets, lighting kits and more.

Get the business tips, industry insights and trending news every landscaping professional needs to know in the TLC newsletter.
Top Stories