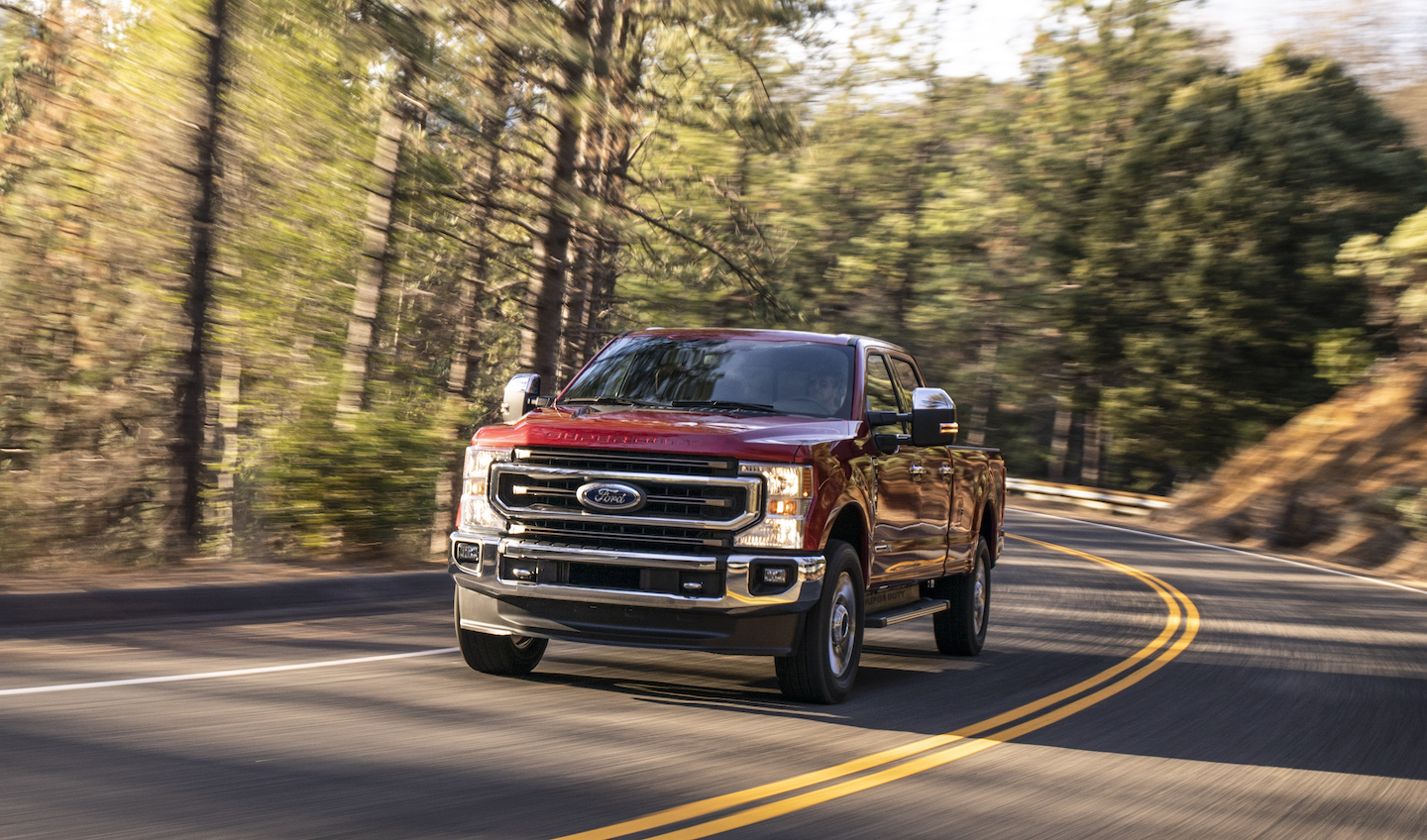 Changes under the hood include an all-new Ford-designed and built 7.3-liter V8 gasoline engine which will serve as a second option to the standard 6.2-liter gasser in 2020 Super Duty pickups. A third-generation 6.7-liter Power Stroke diesel V8 with more power and torque will also debut.

With production slated for later this year, Ford Truck Marketing Manager Todd Eckert declined to release power ratings for both the new 7.3-liter and the bolstered 6.7 Power Stroke. But Dave Filipe, Ford’s vice president of global powertrain, promised the Power Stroke would be “the most powerful diesel engine that we’ve ever had in Super Duty.”

Power numbers for 2020, Eckert says, will be made available closer to the launch. 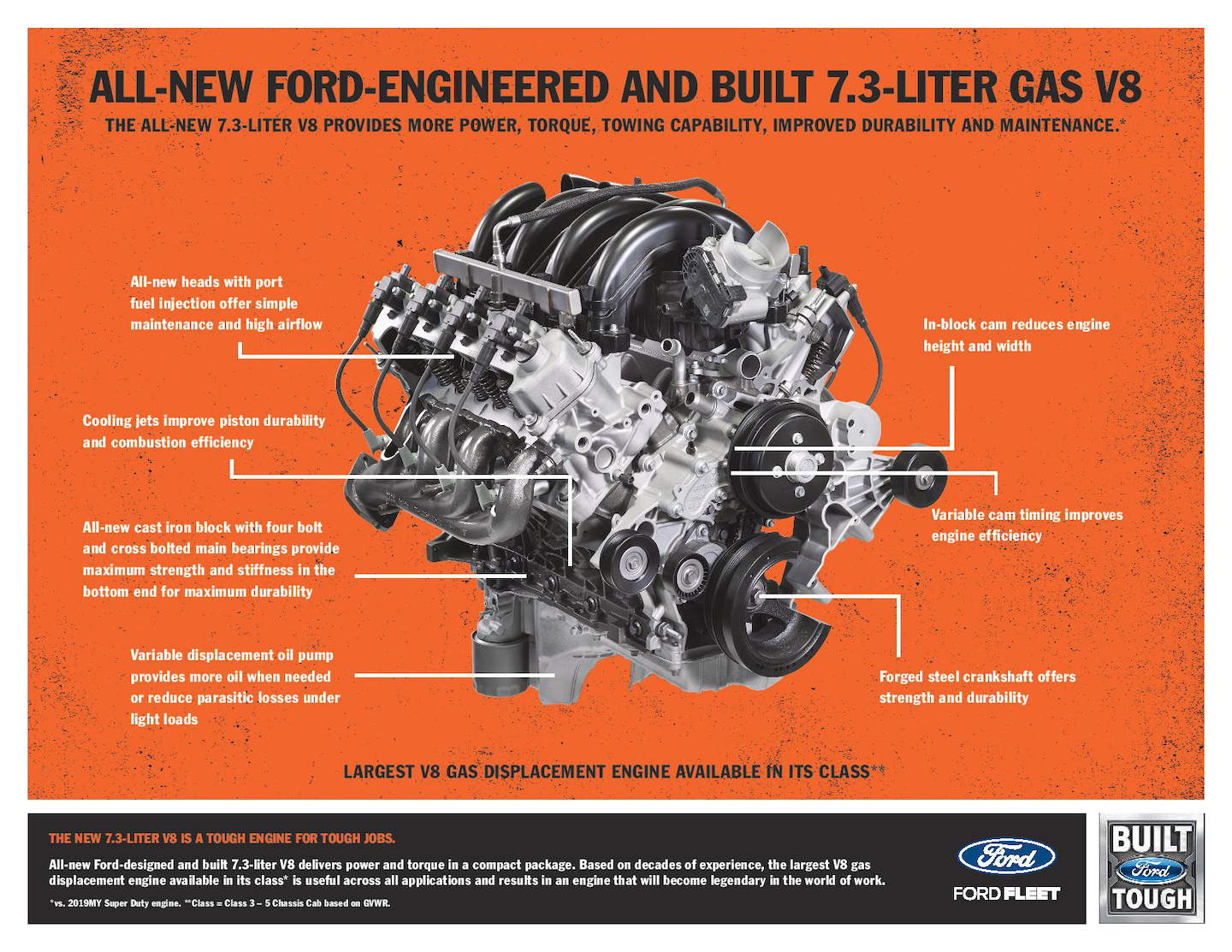 The new 445 cubic inch gas engine, Filipe says, will slide between the standard V8 and the beefed up Power Stroke and will be “the highest rated gasoline engine for Super Duty, ever.” The new 7.3-liter big block, which is expected to be the most powerful gas V8 in its class, features an all-new cam-in-block, overhead valve architecture with cast iron block and forged steel crankshaft for added durability. Port injection with variable valve timing optimizes the intake and exhaust to match performance and workload while oil jets cool the pistons under heavy load.

Both engines will be paired with an all-new 10-speed heavy-duty TorqShift automatic transmission that Eckert says was “designed and tested for the heavy-duty customer.”

Super Duty’s new electronically controlled TorqShift is fundamentally similar to the 10-speed that debuted on F-150 last year but according to the manager of Ford’s transmission systems, Greg Stout, it was a “clean sheet design” that produced “a very beefy, very capable transmission.”

“It shares the same architecture and power flow – the same number of clutches and the same number of planetary gears – but the parts are bigger, beefier, stronger, just to match the engine capability,” Stout says. “This transmission actually has fewer than 10 percent parts in common with the F-150 transmission. And those are things that don’t carry any torque because this transmission was designed to specifically complement the new [engines]. This obviously has a lot higher torque requirements and customer duty cycle requirements than our F-150.”

“This transmission is engineered to handle more abuse in terms of higher weight ratings and loads,” adds Chris Brewer, Ford’s lead driveline system engineer. “It handles twice as much input and twice as much load [compared to the F-150 transmission].”

“With the wider gear span,” Filipe says, “we’re going to be able to optimize the shift points … to make this a seamless shifting transmission.”

It has selectable drive modes that include normal, tow/haul, eco, slippery, and deep sand and snow. Even with four additional gears, the new 10 speed fits in the same space as the 6-speed while weighing only 3.5 pounds more.

The heavy-duty transmission continues to offer class-exclusive live-drive power takeoff, which allows operators to engage industrial equipment and accessories while the truck is moving.

For 2020, Super Duty gets Ford’s Pro Trailer Backup Assist. With hands off the steering wheel, drivers can use the Pro Trailer Backup Assist knob to steer the trailer through the reverse camera. The truck’s Trailer Reverse Guidance system shows trailer angle and direction and provides steering suggestions to most efficiently direct a trailer backward. Both systems are built to accommodate all trailer styles, including fifth-wheel and gooseneck trailers.

Every new 2020 Super Duty is equipped with a FordPass Connect embedded 4G LTE modem with Wi-Fi access for up to 10 devices. Other techie updates include the addition of wireless charging and USB-C ports to power devices.

Added safety features – standard on XLT and above – include an available lane-keeping alert that helps keep the truck between the lines on the road, and the Blind Spot Information System with trailer coverage monitors for vehicles in blind spots. Pre-Collision Assist with Automatic Emergency Braking and Pedestrian Detection aids in avoiding or mitigating collisions with other vehicles and pedestrians.

Decorative appliqués on the doors and media bin door have been updated on Lariat, while on Platinum edition trucks, these pieces have been updated to Onyx Argento wood. The interior of the Limited model got completely refreshed, with colors updated to Ebony and Highland Tan to provide a refined, modern feel. Limited features authentic materials like genuine leather, a coarse ash wood in black and modern brushed aluminum trim. Crafted details include decorative stitching on the leather-wrapped instrument panel topper, wrapped door armrests, seating and center console lid, and an embroidered Super Duty logo added to the floor mats. A soft headliner in Miko suede is intended to give the cabin an expansive feel.