These productive machines can turn deadly if you don’t receive and follow proper training.

The accident: A 33-year-old landscape worker is cutting a tree trunk with a chainsaw while standing on a ladder. He is approximately 20 feet off of the ground operating the saw with one hand while holding onto the ladder with the other when the machine kicks back, striking him in the neck. He falls from the ladder and dies from his injuries.

The bottom line: Proper equipment and training could have prevented this accident, says Jack Hernandez, owner of J.D. Hernandez Forest Products and a Maine Licensed First Class Landscape and Utility Arborist. “Had the man been informed of the risks and trained in how to deal with them, he may still be alive today,” Hernandez says.

Kickback – which occurs when the top corner of the chain impacts a solid object, causing the saw to kick back toward the operator – was the direct cause of the traumatic wound to the worker’s neck. Minimizing contact between the saw’s kickback corner and solid objects and keeping a firm and proper grip on the saw reduce kickback risk. You should not operate a chainsaw until your employer has trained you to recognize potential kickback situations and how to deal with or avoid them.

Another mistake the victim made was operating the chainsaw one-handed. All chainsaws are designed to be operated with two hands.

The man’s fall could have been prevented if he used appropriate climbing gear. When operating a chainsaw in a tree, you should be tied off on two points. (If you accidentally cut through one line, the other will still support you.) Examples of two points include a climbing line with a friction hitch and a work-positioning lanyard, both attached to a tree-climbing harness.

The accident victim was an immigrant from Guatemala, and training likely was not conducted in his native language. Federal regulations require your employer to provide training in a manner you are capable of understanding. This could mean offering spoken training as well as written training guides and equipment operating manuals in a language other than English. 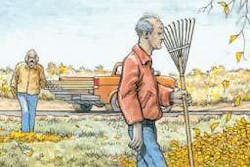 Preventing hypothermia: Be prepared with the proper gear 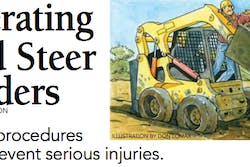 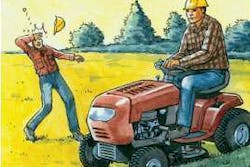 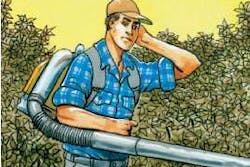