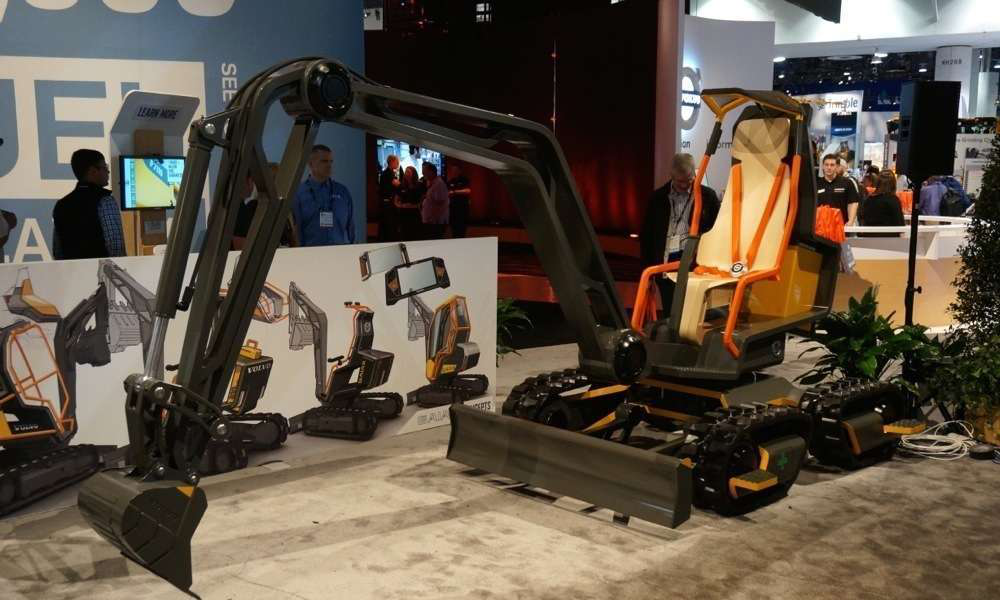 We’ve got to hand it to Volvo Construction Equipment’s design team. After all, the team took inspiration from Swedish furniture and Greek mythology to create a concept compact excavator unveiled today at ConExpo in Las Vegas.

The idea is a bit…broad, but admirable nonetheless. Called GaiaX, the concept machine is named after the primordial goddess Gaia the creator and mother of the universe and the personification of the Earth itself. Remember, we said broad.

The Volvo CE design team says they set out to design the “compact excavator of the future,” specifically, 2030. That’s the year Volvo CE envisions the technology will be ready to full-scale manufacture fully-electric and rechargeable compact construction equipment like the GaiaX.

Even a quick look at the machine gives you the idea that the design is certainly conceptual. Sidney Levy, one of Volvo CE’s chief designers, said the concept machine’s body is made from one folded sheet of metal.

Rather than a traditional cab, there’s only a steel guard rail—covered in leather—and instead of two tracks there are four. Plus—and this is the biggest stretch—the operator’s chair is wooden. Volvo says this encourages a “symbiotic relationship between the operator and the machine,” noting that wood has a natural flexibility that “helps absorb any bumps or vibrations.”

Remember wooden school desks? It’s hard to imagine operating an excavator all day in a chair like that. However, to Volvo CE’s credit, this is a machine they envision will be operated from afar. More on that in a bit.

But how is a compact excavator inspired by Greek myth?

“The Mother Earth figure embodies many characteristics of the concept compact excavator—its innate affinity with the ground, its power, strength, and all-seeing control, as well as its protective qualities,” explains Stina NilimaaWickström, Volvo CE design director. “This is a machine, designed to work in harmony with nature, with minimal environmental impact, and that cares for the user and site staff, keeping them safe from harm.”

And if the goddess Gaia could choose a compact excavator, we’re sure she’d choose a zero-emissions, fully-electric machine like the GaiaX. The machine’s batteries would last a full work day before needing to be recharged. However, the machine could also be plugged in to continue working should you run out of juice—just like your phone or laptop.

One bit of design smarts we were happy to see on the GaiaX was the designers’ use of the heavy batteries as a counterweight to the arm and boom. It’s a welcome cue from the Tesla Model S which has received much critical praise for its superb handling thanks to that heavy battery being mounted under the floor and in the lowest part of the body.

Beyond being powered by an electric battery, the GaiaX’s other standout feature is ability to be remotely controlled from a tablet. In Volvo CE’s vision for the future, that tablet will look a lot like a transparent iPad allowing the operator to remotely control the machine while keeping an eye on his surroundings.

Volvo CE says the tablet could feature augmented reality software and be able to offer suggestions for the cheapest and “ecologically friendly” way to get a job done. It could be equipped with a map of city utility systems allowing the operator to visualize the work before carrying it out.

The tablet would even feature a ground scanner to give the operator a view of buried obstacles and make sure auto-dig modes go off without a hitch. The thing would even project images onto the ground to mark safe zones for passersby and an operator actually inside the machine.

Be sure to check out our gallery of the excavator and video above. And let us know what you think in the comments. Is this the right direction for construction equipment of the future?

Investing in Google Ads is probably something you’ve considered at one time in your career as a business owner, but how much will it cost and will it really pan out?