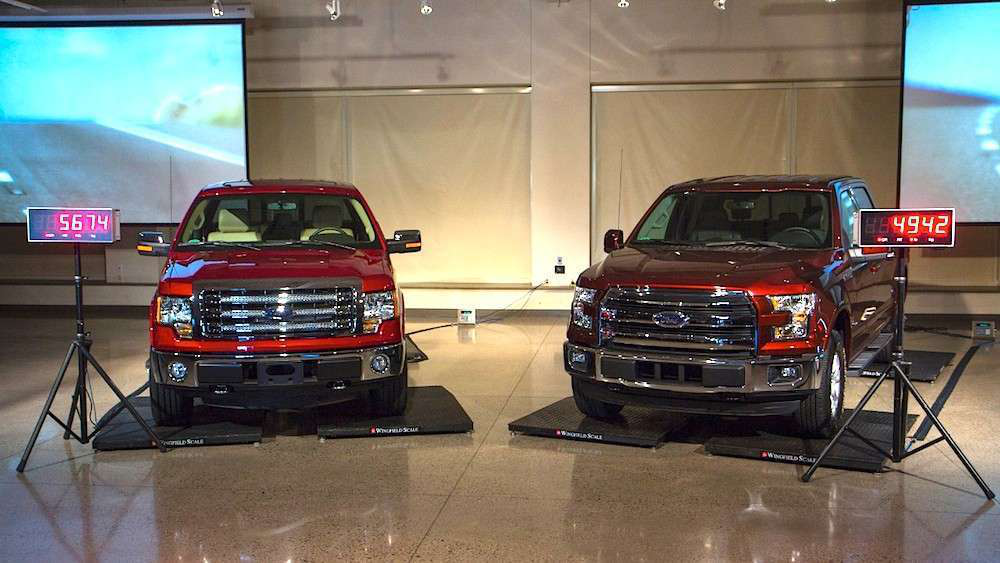 Since unveiling the 2015 F-150 back in January, Ford has released quite a bit of information about the new truck. For starters, we knew that thanks to its aluminum body, the new truck would weigh up to 700 pounds lighter than the 2014 F-150. We also knew that the body won’t rust when scratched and that Ford has thoroughly tested the toughness of that aluminum body through a gauntlet of torture tests and three years secretly embedded at construction sites and mines.

But what we didn’t know were specifics: just how heavy is this new aluminum truck and how powerful would it be? On Monday Ford answered those questions weighing the 2015 F-150 right alongside its 2014 counterpart and revealing power specs for the two new powertrains that will be available for the truck—including the impressive turbocharged 2.7-liter EcoBoost V-6.

When weighed side-by-side at the press event, the 2015 F-150 equipped with the 2.7-liter EcoBoost weighed in at only 4,942 pounds—732 pounds lighter than the 2014 F-150 with a 5.0-liter V-8. Ford didn’t release any fuel economy numbers for the 2015 model during the event, but weighing in at less than 5,000 pounds definitely puts this new F-150 in contention to become the most fuel efficient half-ton when it launches later this fall.

In fact, based on weight alone, the new F-150 might give even smaller trucks a run for their money on fuel efficiency. On Twitter, Ford spokesman Mike Levine noted that the 2015 F-150 Super Crew 2WD equipped with a 3.7-liter EcoBoost V6 weighs around “4,500″ pounds—only 234 pounds heavier than Chevrolet’s new mid-size pickup the 2015 Colorado with a 3.6-liter V6.

But perhaps the biggest news out of the event were the impressive power numbers for that 2.7-liter EcoBoost V6. Ford says the engine produces 325 horsepower and 375 foot-pounds of torque giving. The engine has a maximum payload of 2,250 pounds and can tow up to 8,500 pounds making it as capable as other manufacturers’ midrange V-8s.

Ford also detailed its other new powertrain option which will come standard on the 2015 model. Last year’s standard 3.7-liter has been dropped for a new 3.5 liter V-6 which will produce 283 horsepower and 255 lb.-ft. of torque with a maximum payload of 1,910 pounds and the ability to tow 7,600 pounds.