Landscapers Give Back to Those Who Gave It All

It’s all about the stories, from veterans who were laid to rest at Arlington National Cemetery to landscapers and their families who volunteered their time to renovate the grounds.

It’s the stories of the children who have come for the past decade and are now leading groups, those who have personal ties to the military and others who can’t imagine not coming every year.

But the most important stories are the ones that have ended. This day was about honoring the men and women who gave their lives for this country.

Showing gratitude
More than 400 men, women and children from more than 30 states met in Arlington, Virginia, July 28 for PLANET’s annual Renewal & Remembrance event. Many brought equipment, lime, tools and the spirit of service to the cemetery, which is having its 150th anniversary.

During the opening ceremony, all of the speakers focused on the importance of having an event to honor fallen soldiers.

“Some sacrificed all, and that’s who we’re here to give back to today,” says John McCutcheon, PLANET president. “It’s an easy decision for me to come back each year.”

Walt Money, U.S. Marine Corps Veteran and with Bartlett Tree Experts, also addressed the crowd before they headed out.

“Unlike those interred here, we can leave this place and return to our families,” Money says. “They gave their last ounce of devotion so we can come here and do what we love and enjoy.”

Coming full circle
The landscapers were divided into several groups to cover the more than 180 acres at the cemetery. Projects included aeration, irrigation, spreading 78 tons of lime, adding tree protection and planting foliage.

One group using push and ride-on spreaders included Shane Newman – owner of YardApes in New Milford, Connecticut, and a 2011 Landscaper of the Year finalist – and members from Lawrence Landscape Design in Yonkers, New York.

Lawrence “Larry” Wilson, owner of Lawrence Landscape Design, and his wife and children have been coming to Renewal & Remembrance for a decade.

“It’s a public service opportunity, and we wanted to get our children involved with it early on,” he says. “We ask, ‘What more can we give?’ because this is nothing, compared to what they gave.”

His wife, JoAnne, recalls bringing their son, James, to Arlington 10 years ago for his first day of service. “When we started, he was little and used the hand cranks,” she says with a smile. “Then, he moved up to the push spreader, and now he is on the electric spreader.”

Now 18, James is a member of the ROTC and a Naval officer.

Not only have their children grown, but the event has also expanded since the Wilson family first started attending. “We used to park alongside the streets when it first started,” JoAnne recalls. “It’s gotten much bigger since then.” Now, groups are transported in several buses to and from the grounds.

Another one of the PLANET teams worked on adding lightning protection to three of the trees. Jeremy Baker, with The Care of Trees in Dulles, Virginia, and three others from his company attached the wire to the tree and placed it underground.

“Arlington is a national treasure,” says Baker, whose father and grandfather were in the military. “The least I can do is come and serve for a day.”

RELATED: How Landscapers Can Serve Our Country

For those who have never attended the event, Baker urges them to volunteer next year. “Come be a part of something bigger, and you’ll find yourself,” he says.

Future of the industry
The more than 40 children were also given jobs, which included laying wreaths at the Tomb of the Unknown Solider, planting grasses and trees,

creating flower arrangements and laying the flowers on graves. When asked who had come to Renewal & Remembrance before, the majority of the children raised their hands.

One of their leaders, Roger Phelps not only came to give back, but he also wanted to pay a visit to his lost friends who were buried at the cemetery. Phelps, with Stihl and on PLANET’s board, served in the Navy for eight years of active duty and two in the reserve. “It’s a chance to serve my shipmates and pay my respect,” he says.

While he says it’s important for landscapers to come out and use their talents, he thinks it’s especially vital for the children to be here. “It’s important for this generation to understand service and sacrifice,” Phelps says. “They need to know what they can do for their country and that they have a role.”

The children ranged from preschoolers to teenagers, and each was given a task to handle. Emma Gilbey, a 12-year-old from Maryland, has been attending Renewal & Remembrance for four years. Her father is a landscape architect with Vectorworks.

When asked what has been her favorite part of the experience, Gilbey responds, “All of it.”

She says it’s important to come back each year. “They respected us, so we should be very respectful and give back to them,” Gilbey says.

One spectator who completely understands what it means to serve was Col. Joseph Simonelli, U.S. Army and Chief of Staff at Arlington National Cemetery. He visited the different groups to show his appreciation for their efforts.

“Having them come out here shows they know what it means to be an American,” Simonelli says. “It shows gratitude of what our soldiers have done.”

As the afternoon approached and work came to an end, aeration plugs and lime lined the luscious grass. Red and white flowers arranged by little hands adorned the graves. But most importantly, a group of landscapers came together for a day to honor the fallen service men and women. 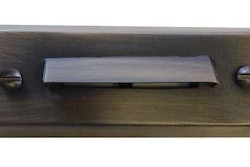 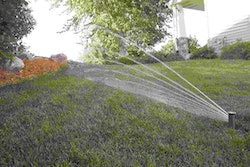 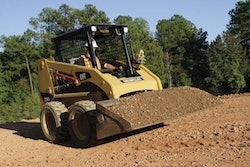 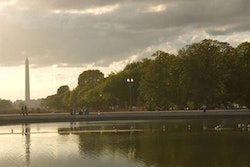