More often than not you’ve experienced a customer questioning you about mushrooms in their yard, and unlike Alice when she visited Wonderland, your customers really don’t have a use for them.

Your customers may be asking why are they there? Can you do something to make them go away? Are they going to mess up my yard or harm it?

The great thing about mushrooms is that overall they do not mess up the landscape, and most of them are harmless. They can assist with the breakdown of organic matter, which helps make the soil richer. However, some are poisonous and pose threats to your customers’ pets and children.

The downside is that there’s really not much that can be done about them, other than digging them up or pulling them up by hand (while wearing gloves). Because mushrooms are the fruit of large fungi that live underground and feed off decaying matter in the soil, fungicides do not work on them.

The underground structure of the mushroom fungus is large and can stay around for many, many years. The actual umbrella-shaped heads we see are there to help spread new spores and create more colonies of mushrooms, and they often appear after a large amount of rain.

While mushrooms themselves may be harmless, they do have some fungi cousins that are not so harmless. There are many types of lawn fungi, and the type of fungus can determine whether or not your customer’s lawn is in trouble or not.

Take a look here at a few common lawn fungi and how you can help your customers deal with them if they do show up.

Dollar spot is a foliar fungus that can affect all species of warm- and cool-season turfgrass. According to the University of Arkansas Division of Agriculture, dollar spot is possibly the most widespread turf disease in the home lawn; it is caused by the fungus Sclerotinia homoeocarpa.

Dollar spot is common on golf courses and produces two- to six-inch circles that are straw colored. In the early hours of the morning when dew is still present, a faint growth resembling cobwebs may show up.

Dollar spot is common in late summer and fall when the temperatures are mild and conditions are moist. The fungus usually spreads by the movement of infected grass clippings by lawn maintenance equipment.

If the disease progresses, it is recommended that you use fungicides. Irrigation and proper fertilization can help in the prevention process, and adding a bit of compost can also lend a hand. Be sure to keep thatch to a minimum also. When a lawn is lacking nitrogen, it will typically begin developing dollar spot.

When looking for leaf spot, keep an eye out for purplish red and brown spots with tan centers appearing along the borders of blades of grass. The tips of the grass could even begin to die, and the blades will begin thinning.

Leaf spot is caused by the family of fungi called Helminthosporium, and it is more likely to come about in the spring and fall. When spring temperatures reach 55 to 60 degrees and excess moisture is present, the fungus will begin to grow and spread.

To keep this out of your customer’s yard, avoid watering in the evening and cut back on using nitrogen fertilizer. Be sure to also remove any excess thatch from the yard.

To control leaf spot, fungicides may be required, and they work best when they are applied as soon as the spots first show up. Fungicides are less effective once small patches of the lawn begin to die.

While the name may sound mystical and magical, fairy rings are detrimental to grass. Fairy rings, also known as Marasmius oreades, are simply a large ring of mushrooms that appear on lawns. If the circle continues to expand, all of the grass inside will be at risk.

Fairy rings feed on decaying matter and often appear around a layer of thick thatch or decaying organic matter. To keep these rings at bay, remove these decaying materials from the landscape as soon as possible. Lawn that are fertilized and watered regularly tend to have fewer problems with fairy rings.

When renovating an area that you know has fairy rings, make sure that the soil is blended together well, because different fairy ring fungi can attack each other. If there are multiple rings in an area, collect the white mycelia from each ring, mix it together, spread it over the soil and work it in.  If it’s too late for prevention, rake them up or pick them by hand (while wearing gloves).

Red thread usually occurs on taller mown turfgrasses during the spring and fall, and can be identified by the irregular areas that develop a whitish to pinkish color. These can range from several inches to several feet across, and in wet weather the affected leaves are covered with a pink fungus followed by bright red threadlike strands.

The disease can develop the most during the spring and fall, but development can occur over a wide range of cool temperatures, especially during long evening dew periods.

If the level of nitrogen is low in the soil, fertilizing the lawn may help speed up the recovery process. Deep watering could also help reduce damage, and collecting grass clippings when the disease is active can keep it from spreading.

Sporting a yellowish to reddish-orange appearance, rust can cause grass blades to turn yellow, wither and die. Rust is a disease that affects taller mown turf, and outbreaks are most common on residential lawns and low budget athletic fields.

When observed up close, numerous yellow-orange pustules can be found on the blades of leaves. These spores can be carried and spread by equipment or wind.

Outbreaks of rust are more common late in the summer and early in the fall, but the disease can also be active in the early spring on poorly nourished turf. Since this disease affects slow growing turf, factors that contribute to poor turf growth also aid rust development.

While it may not rid your client’s yard of mushrooms completely, there are a few things you can do to help prevent these fungi from popping up as often.

Be sure to remove any rotting wood or fallen branches from the landscape and grind out tree stumps, as mushrooms use these as food supplies.

Improve the drainage of the landscape by aerating, and do not overwater. As the soil dries out, the mushrooms will recede.

Be sure to let as much light get to the lawn as possible. Consider thinning surrounding trees and shrubs to increase air circulation and light exposure in shady, damp areas. 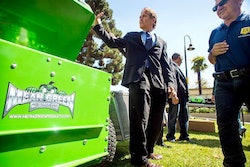 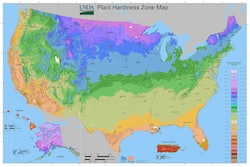 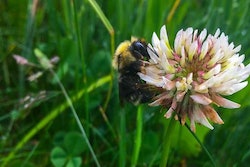 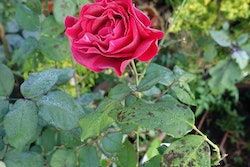 What to know about black spot and how to prevent it