The thing about seasons is that they are here one minute and gone the next, so it is never too early to start planning for the upcoming snow removal season.

Because snow and ice management can be such a tricky, unpredictable business, you try to increase your profits and plan as best as you can. Boss Snowplow’s latest product, the QuickCube System, is designed to reduce operational costs and improve reaction times to customer service needs.

The QuickCube system consists of a spreader assembly and six poly cubes (hoppers). Each cube can hold 1,000 pounds of salt and replaces the need for remote salt piles, tarps and temporary salt shelters. The cubes can be stacked on jobsites and are neutrally colored so they will blend in with the surrounding area.

A fork-shaped spreader assembly is attached to any skid steer with a universal attachment system and can pick up the filled cubes and move them to spread salt. The cube contains a gravity-fed hopper spreader, making it easier to maintain and less likely to break down.

The concept of the QuickCube came from Nate Kohn, owner of Nate’s Landscape Company based in Belgium, Wisconsin, as a direct response to the logistical issues of servicing clients during a snowstorm his company was experiencing.

Realizing that the traditional salt truck wasn’t meeting his needs, he began to develop the idea of a weather-proof box that could hold salt on a jobsite. Having a long-established relationship with Boss, Kohn approached the company with his idea.

“I’ve used Boss products for years, and I trust its record of designing great products that keep the needs of its customers top of mind,” Kohn said. “I knew I wanted to work with Boss to bring my idea to life.”

From the time that Kohn reached out to Boss and its engineers began working on a final product, it took two years to create the QuickCube system. After the first prototypes were tested out in the field by landscape contractors, the company was able to make design adjustments so that the product could be a real asset for snow and ice removal companies.

“We think the beauty of the product is how simple it is,” said Mark Klossner, vice president of marketing at Boss. “It will make it very durable and reliable.”

Some of the benefits of the QuickCube system include improved customer response time as landscapers can now stage a skid steer, QuickCube system and box plow at the jobsite before a forecasted storm. This allows operators who live near the jobsite to drive straight there and begin servicing the client.

This system also reduces the travel of costly truck and spreader rigs during dangerous driver conditions. By staging QuickCubes beforehand, landscapers can save on fuel costs, wear and tear on trucks and reduce the risk of accidents.

Another bonus is the fact that skid steers do not require special licensing, and are cheaper to insure, opening up a wider labor pool instead of having to find specially licensed truck drivers.

As for the cost savings, last season when Kohn’s company was testing out the pre-production units, he says they saw huge operational savings and instead of having 12 salt truck routes, they were able to get by with just six.

Klossner estimates that users of the QuickCube system could see savings anywhere from 25 to 45 percent, depending on a number of variables.

For more information on the QuickCube system, click here. 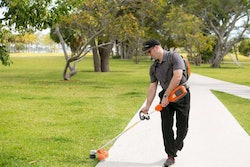 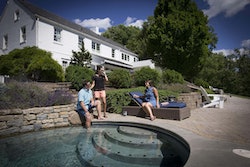 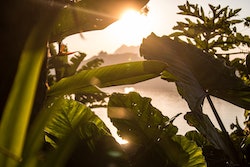 Tropical leaves that can give your clients the oasis they desire 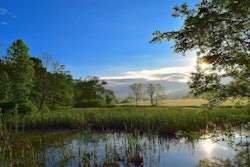