Earlier this month, we told you about a handful of the companies out there that can help augment your lawn care business, but there are far more than the few we mentioned.

Eden is an example of one of these apps and it says it stands out from the competition thanks to its ability to service all four seasons, not just mowing the lawn.

“Some of the other ones don’t touch upon the snow, as well within the feature set we do many more things than grass cutting,” said Ben Zlotnick, founder of Eden. “We do garden beds, shrubs, leaf cleanup, soil mulching, tree work and aeration. Mainly because I’m from the industry I know majority of customers also need garden beds done. They have to have their leaves cleaned up in many parts of North America, there is no leaf cleanup offered on other apps.”

Zlotnick comes from the lawn care and snow care industry, bringing 15 years of experience, and combined it with his knowledge of technology.

He created Eden in response the growing idea of an on-demand economy where individuals don’t want to speak to other people necessarily but can press a few buttons and have someone show up to take care of their property.

“I’m building something out that might not kill my own traditional business, but make a dent in it,” Zlotnick said. “I can either continue what I’m doing or create more opportunities for many of my fellow landscapers and snow contractors by providing more work for them.”

Based out of Toronto and Ottawa, Canada, Eden has markets in Boston, Philadelphia, Chicago and Minneapolis to name a few, and Zlotnick says in 2018 they plan to expand in the southern and western U.S. as well.

Currently around 1,000 contractors use Eden, and Zlotnick says there is a massive market of untapped residential homeowners who aren’t being serviced by contractors.

Homeowners who want to use Eden can order the job through the app to schedule a no-contract lawn maintenance job and they will be sent a quote. If they accept the job, it will be sent out to local contractors who can choose whether or not to accept the job. The customer then receives notifications when the job is starting and when it is finished.

The snow plowing and lawn mowing prices are set by Eden and are based on the average price of the region the job is in as well as the size of the job.

“Any of the add-ons like tree work that is priced specifically by the contractor,” Zlotnick said. “We set that up specifically because we’re industry experts. We talk the talk; we’re not outsiders.”

Unlike some of the other apps, the percentage that Eden receives from a job varies, but the contractor knows exactly how much they are going to make when they are sent the notification for a new job.

“Depending on the amount of jobs they take, some make as much as $2,000 a week,” Zlotnick said. “Some might have 80 percent of their route filled, others might earn $4-500. Some are doing very well by taking as many jobs as they can get and others are using it as fillers.”

In order to work as a contractor with Eden, landscapers are required to have liability insurance, a business account and a valid license. Eden maintains quality control by being alerted any time a service provider receives less than a 4-star review three times so it can look into the matter.

“We are growing fairly quickly,” Zlotnick said. “We can just do a grass cut or a number of other services. We’re moving forward with a number of services across the American market.” 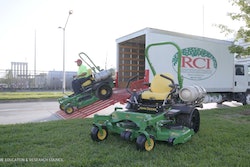 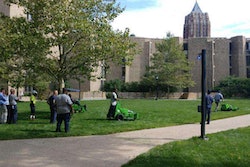 Yale trades out gas- and diesel-fueled equipment for electric models 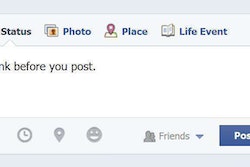