John Deere recently announced the updates to the 1600 Turbo Series III wide-area mower, including the addition of a Final Tier 4 (FT4)-compliant engine.

John Deere says the 1600 Turbo Series III mowers offer operators a powerful and efficient machine ideal for tackling large areas and hills. Along with engine upgrades, the company says the 1600 Series III mowers include a variety of features designed to increase operator comfort and improve performance, serviceability and reliability.

John Deere says the updated 1600 Series III mower FT4-compliant, liquid-cooled, four-cylinder engines have been optimized, and they add that the power has been boosted to PS 60 hp (44 kw) at 3000 rpm to further improve performance.

The company says the new heavy-duty rear bumper is designed to easily swing out of the way to allow the hood to be opened for service without using tools. To better protect it, John Deere says the bumper is removed from the hood and the cooling package seals from damage.

Also installed with quick-release latches, John Deere says the bumper is securely in place when in the operating position. The rear frame, the company says, also has been strengthened to support the new bumper.

John Deere says each mower is equipped with a 62-inch center deck and two 42-inch wing decks, all of which are rear discharged. With an on-demand or full-time four-wheel drive (4WD), the company says a heavy-duty system provides optimum performance, long life and reliability.

Color-coded controls in the machine, according to the company, are easy for the operator to use and locate. John Deere notes that the machine is also compatible with Service ADVISOR and is equipped with warning indicator lights, diagnostic information and gauges.

With a large eccentric rotating weight, John Deere says it creates vibration and impulse energy to deliver the optimal attachment productivity and performance. The company says the weight’s mass is farther away from the shaft to provide increased impulse forces up to 8,000 pounds and improved compaction rates when working with compact granular soils.

The motor, according to John Deere, is inset within the frame to protect it from damage and maximize durability and reliability. John Deere adds that hydraulic motor bearings use oil splash lubrication, and the company says the sealed eccentric bearings provide maintenance-free operation.

“Our new control zone kit provides contractors and specifiers with an all-in-one solution that delivers convenience and savings to large drip zone installations,” said Ivonne Meza, product manager for Rain Bird’s Landscape Drip division. “It decreases installation time and costs by ensuring that all key components are included and properly assembled. By covering a larger drip zone with a single kit, fewer zones are required, as well as fewer valves and other components. Ultimately, it also takes less labor to install drip irrigation in that same area.”

With the multitude of high school football teams in Texas, Mike Bass, the athletic director in the Alvin Independent School District (ISD), says he knows the power a football field can have on a community.

With over 4,000 student-athletes, Alvin ISD says its high school football stadium has a capacity for more than 7,000 fans. Bass says that many high school teams across Texas use inflatable run-through tunnels to introduce the players onto the field, which means the district’s stadium needed a way to power air compressors on the field.

“We needed something that was not going to be a hindrance,” said Bass. “We didn’t want anything sticking up out of the ground, and we had to have something that could handle moisture since turf fields are designed to allow water to flow through them. With that in mind, we tasked the team at Stewart Builder to find a product that would integrate with our field.”

With this in mind, the team at Stewart Builder recommended the Outdoor Ground Box from Legrand to Bass and his staff. Bass says the Ground Box uses a unique diving bell design to create and maintain an air pocket that protects the electrical connections from getting wet in adverse weather conditions.

Also featuring anti-float clips to prevent the cover from lifting up and breaking the air bubbles or tripping people, the Ground Box is also lockable for preventing unauthorized use.

“We actually put turf on top of the Ground Box, so it blends in with the field — you can’t even tell it’s there,” said Bass. “We find ourselves constantly relying on it, not only during football games but for practice, too, like powering pitching and jug machines and recharging our electric cart.”

The Alvin ISD team hadn’t yet had the chance to use the Ground Box before Hurricane Harvey touched down on the coast.

“We needed to test the box to see if it worked well in all conditions, and we tested with about 53 inches of water,” said Bass.

The stadium was flooded with more than four feet of water, as well as the town, which left many families and students underwater.

Eventually, the water receded from Alvin, and the district was able to check whether or not the Ground Box survived the hurricane.

“We opened up the Ground Box, plugged it in and it worked,” said Bass. “The Ground Box did not miss a beat.” 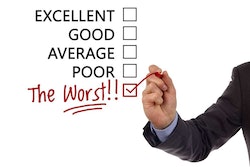 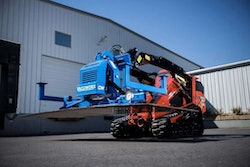 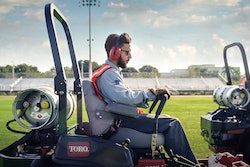 Get the green facts about propane mowers 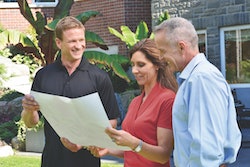 Landscape contractors: What we gain from working with landscape architects