Material spreading is an essential part of a profitable snow removal service.

“If a contractor is only plowing snow and not offering spreading or spraying services, he or she is missing opportunities,” says Michael Frank, a senior product manager for SnowEx.  Commercial clients are more likely to want to get their snow service needs from one provider, rather than deal with one company, he continues. “And the demands for these services are high as the concerns over slip-and-fall accidents — and the potential legal costs associated with them — continue to grow.”

Material spreading also prevents snow and ice from bonding to the surface, making it easier to plow.

“Many snow events are insignificant enough that deicing alone prevents accumulation,” says Tyler Jones, a product manager for Fisher Engineering. “The beginning and end of the season require more deicing than plowing. Fall frost needs to be melted, not plowed, and springtime snow banks melt and then freeze at night causing black ice spots, which cannot be plowed away.”

According to Frank, an account can require spreading up to four times more than plowing.

Material spreading can also extend the snow and ice management season, as freezing rain and freeze-thaw cycles in the spring will still require treatment.

There are two main times for material spreading: before and after the storm. Anti-icing is the application of brine or an alternative deicing product prior to a snow storm.

By being proactive and pretreating properties, landscapers can prevent hard pack and the buildup of snow and ice, allowing it to be cleared more easily afterward.

Providing anti-icing services also reduces the amount of product that must be used and is safer, reducing the risk slip-and-fall litigations.

Deicing, on the other hand, is the application of snow- and ice-melting products after or during a snow storm. Depending on the temperature and nature of the storm, multiple applications may have to be made to effectively melt the snow if pretreating was not conducted beforehand.

Experts agree that it is best to use a liquid deicer when pretreating.

“It is a good idea to pretreat with brine or other liquid deicers,” says Jen Strelcheck, a product manager with Boss Snowplow. “The brine coats the road and dries there. Once the storm hits, it will create a ‘non-stick’ surface, and after plowing, the contractors will need far less solid material to finish melting the site.”

It can also be costly to pretreat with solid materials, as traffic can relocate the granules and the material is wasted if it doesn’t end up snowing.

“Spraying brine is also gaining in popularity because it uses less salt than spreading bulk salt or other deicers for the same area,” Frank says. “This is not only a cost/efficiency advantage but also one that isn’t as harmful to the environment. More commercial customers are requesting the use of liquids for these reasons.”

Yet when working in situations where there is already snow on the ground, solid deicing materials have the advantage, providing more friction to the surface.

“With the right conditions, spreading materials on top of snow and ice helps to break up a previously formed ice bond so a plow can come through and be effective,” Frank adds.

Rock salt is one of the most commonly used deicing materials, but it loses its effectiveness after the temperature drops below 23 degrees Fahrenheit.

Other deicing materials include calcium chloride, magnesium chloride, potassium acetate and more. The effectiveness, cost, availability and environmental impact of all of these materials vary depending on your market.

When it comes to choosing what equipment to use for material spreading, it isn’t a question of which is superior, but which tool is best for the job.

Pros and cons of sprayers

Liquid sprayers are ideal for anti-icing applications, as they can apply the layer of brine needed to prevent snow from binding to a surface.

Since brine has less salt content, the same amount of salt can go further with a sprayer than with a spreader. In the winter of 2013-2014, a shortage of salt supplies and drastically low temperatures drove contractors to adopt liquid application equipment.

Since then, more users have been looking at sprayers to help reduce the amount of salt they need to do the job. Like a spreader, sprayers can be used to deice after storms but it’s a more sensitive process, according to Frank.

“Basically, if you’re spreading salt on ice/snowpack, it’s much more forgiving,” Frank says. “Certainly, you want to be more refined about the process than just throwing as much granular salt as possible at the situation, but going that route won’t make the situation worse. When deicing with liquids, you definitely want to know what you’re doing, as it is possible to make the situation worse when applied incorrectly.”

Liquid deicing material used in sprayers, however, is sometimes harder to find than deicing solids used in spreaders, according to Doug Clark, a product manager for Western Products.

“The dispersal equipment, solid or liquid, can run between $4,000 and $12,000 depending on the size and features needed by the contractor, but the brine-making equipment can range from $15,000 to $40,000,” she says. “That price does not include storage tanks, foundation work, electric or water upgrades to allow the machine to operate properly.”

Making your own brine is the most challenging part of the liquid deicing, as the solution should be at 23.3 percent salinity, according to Strelcheck.

Pros and cons of spreaders

For those wanting a more entry-level option in material spreading, traditional salt spreaders offer more choices, such as small capacity tailgate spreaders, according to Clark. Spreaders tend to be less complicated as well, so they are suited for those not quite ready to dive into the deep end of snow and ice management.

Jones says spreading also allows for the inclusion of aggregates, such as sand or cinders to improve traction on a surface.

Another benefit of spreaders is the easy access to deicing material without having to worry about the salinity percentages. This advantage, however, is a double-edged sword, as contractors are also more likely to over-salt areas using a spreader.

“A solid material spreader can put down enough material to melt away the remaining snow and ice,” Strelcheck says. “The drawback to being able to put down plenty of material is that it is easy to use too much material. All that extra material ends up in the storm drain.  Another issue with relying on salt and solid deicers is they are ineffective in very cold temperatures.”

Selecting the right spreader depends on knowing what materials you plan to use, finding the right capacity, mounting style and the construction style for the unit.

Due to the corrosive nature of salt, it’s crucial to clean spreaders and sprayers daily to ensure the longevity of your material spreading equipment.

“Always, always, always wash it out at the end of the day; never leave it full overnight and properly store it (in a clean dry sheltered spot) in the off season,” Clark says.

When the snow season ends, make a point to give your equipment a good once over and make any necessary repairs before stowing it. 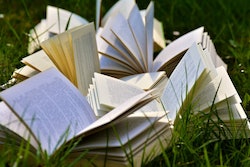 Satisfy your inner book worm with these 23 lawn care reads 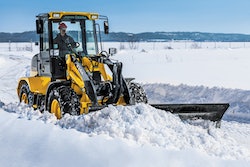 Snow removal: Making the most of machines 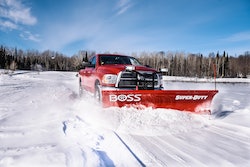 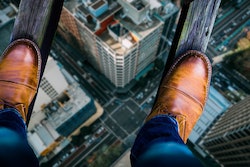