Slowing and controlling EAB’s spread across the country 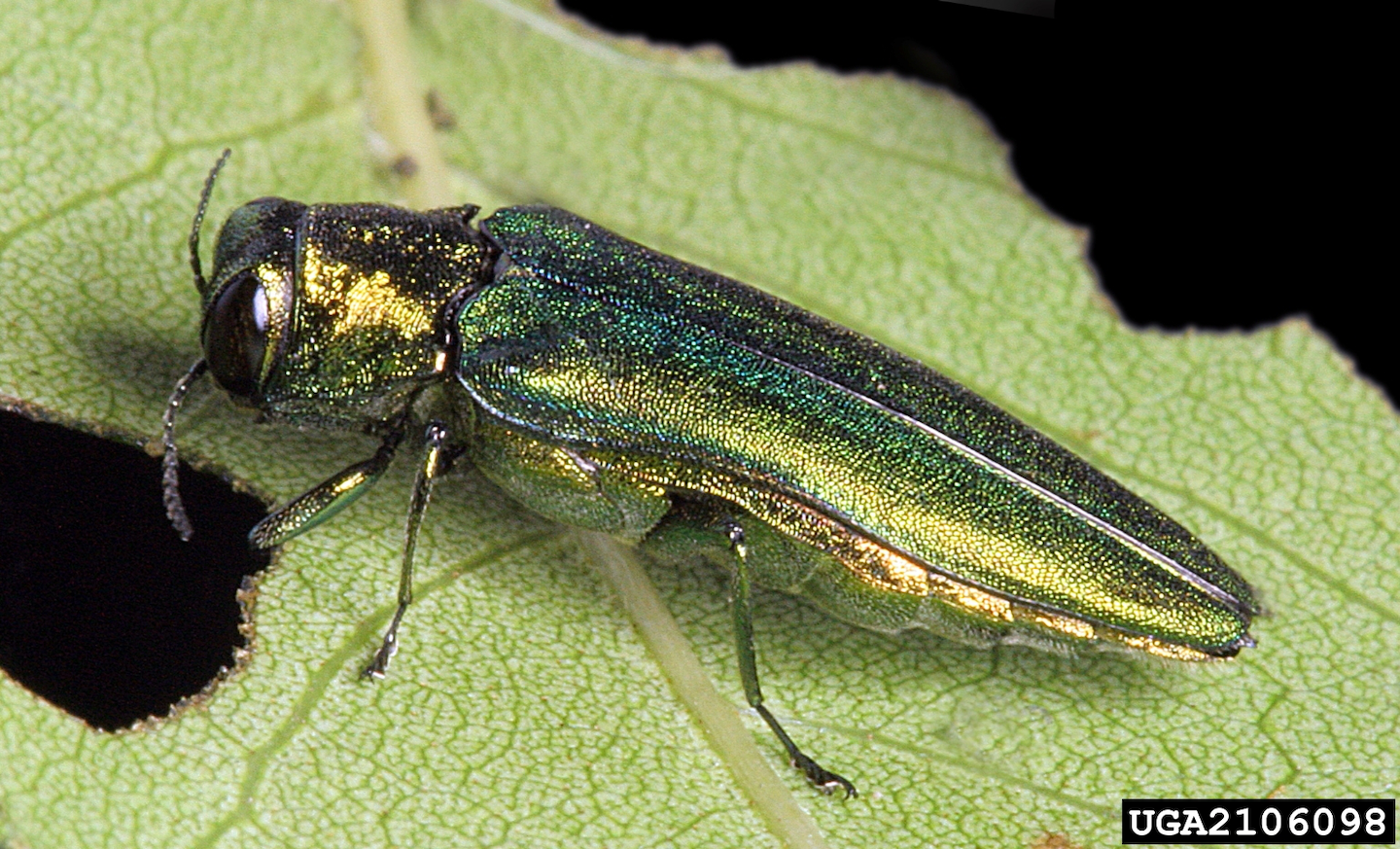 Last year, we covered the history of the emerald ash borer (EAB) and how it has spread, as well as what are the treatment options when it comes to dealing with the invasive pest.

Now, we’re looking towards the future and what will be the most likely outcome for ash trees and EAB. Millions of ash trees are dead and the costs of treatment, removal and replacement of the trees across the country are proving expensive to many communities.

The invasive pest is currently found in 35 states and EAB is expected to eventually spread across the rest of the continental U.S. “Wherever emerald ash borer can find a suitable host, they’re going to spread,” says Rob Gorden, director of urban forestry for Arborjet. “The question is how long of a time period will it take to do that?”

Gorden says the spread of EAB is slowing toward western states, as the ability to get from one place to another is limited without wide swaths of ash trees. He says how far humans take the borer in firewood is the determining factor as to how long it will take for EAB to reach more western states.

Oddly enough, Mississippi and Florida are the only two states east of the Mississippi River that have not confirmed the presence of EAB as of yet. Experts agree that EAB is probably present in these two states, but it just hasn’t been detected yet.

“There might very well be an infestation somewhere but our detection methods for it aren’t great,” says Dave Olson, forest health specialist with the Nebraska Forest Service. “Our traps aren’t really good at luring them in. Usually, there’s a significant population going by the time they catch one in a trap. By the time you start to notice a tree start dying, it’s probably been there for several years.”

Another potential reason why these states have possibly remained EAB free is due to a lower population of ash trees, making it harder for EAB to reproduce in large numbers.

“I think, to a large extent, the population of ash trees is relatively small,” Gorden says. “Those states tend to have fewer outbreaks or more isolated outbreaks or they don’t spread nearly as quickly.”

While the spread does seem inevitable, Olson says maintaining quarantines is still a good idea, as just finding EAB in one county doesn’t mean it’s made it across an entire state.

“A lot of states have shown that it’s pretty effective,” Olson says. “Some people disagree with that and think that because EAB will spread eventually there’s no point in doing it. But the big thing we’re focusing on in Nebraska is trying to slow it down, not so much with the thought that we’ll definitely keep it out of the rest of the state, but to give a lot of those smaller towns that don’t have budgets to remove street trees or homeowners time to prepare for that and actually get these trees down. That’s proving to be a pretty big hurdle for a lot of smaller communities across the U.S.”

When it comes to the question of whether it’s better to remove or treat ash trees, the answer is it depends. Olson says the decision is typically up to the homeowner.

If they do want to take down and replace their tree, it is best to remove a tree once EAB is confirmed in the local area rather than waiting for the tree to die, as it results in a more expensive removal. “When EAB shows up in an area, we’re really recommending people either begin treatments or take down the tree relatively quickly,” Olson says. “Once a tree is found to be infested with EAB, it usually dies within one to four years. Ash trees can start falling in as little as one year after it’s been killed by EAB, so they become very dangerous.”

As for what type of trees should be grown in place of ash trees, Olson says they are trying to encourage people to plant more diverse tree species.

“That’s the thing, we didn’t learn our lesson with American elm,” Olson says. “We planted that all over because it was a great tree and then we did the same thing with ash, and sure enough, both of those trees are getting wiped out.”

Olson advises against maples, as they are suspectable to Asian long-horned beetle, as well as Callery and Bradford pear trees, which have a tendency to escape and revert back to native growth habits.

Not all trees are good candidates for treatment, so it’s important for your customers to consider that as well as the fact that treatments can be expensive.

“We usually tell people, ‘You’re putting your tree on life support almost,’” Olson says. “It’s something that’s going to have to be done for the rest of the life of the tree. And to do that it would have to be a pretty significant tree to be willing to make that investment. Now, there are certain circumstances that might warrant that, but it definitely isn’t something you should be treating every ash tree on your property with when it might be cheaper to take it down.”

On the other hand, Gorden argues that in almost all cases, saving the tree is preferable to allowing the ash tree to die or cutting it down. He says Arborjet’s TREE-äge product can provide multiple years of protection for ash trees, making it economically feasible for cities to treat their trees. TREE-äge uses the active ingredient emamectin benzoate and is injected into trunks.

“When we start thinking about protecting trees, it’s not just a matter of can we save the tree but what happens when we save the tree?” Gorden says. “What are the economics and end values for that property in the city to save a tree?”

The city of Milwaukee has been treating 27,000 ash trees over the last 10 years, every third year since it started using TREE-äge, and it has not lost an ash tree since they started treating, according to Gorden. “It was not that way when we first started to work with emerald ash borer,” Gorden says. “It was kind of gloom and doom; everything was going to die. The beautiful thing about this is that what we found is that as emerald ash borer comes through a community, it kills what ash trees are not protected, and the ash trees that are protected survive. And then the emerald ash borer can’t live. So, the population dies off in those areas, which means that the risk trees start to diminish. Instead of treating, say, every two or every three years, there may be the ability to come back every four or five years and re-treat just to make sure the tree is protected.”

Gorden says unless the tree is very small or very sick, it makes sense to save the tree with treatments.

“If a tree is under a certain size, and I say generally about 6 inches in diameter, it’s fairly inexpensive to cut that tree down and replace it with something else, something else that you won’t have to treat for any particular problem in the future that we know of today,” Gorden says.

While it’s always more desirable to prevent an illness or disease instead of having to respond to it, Gorden says research has shown an ash tree could have as much as 50 percent canopy loss and applications of TREE-äge can still save it.

The best time to treat for EAB depends on the method you’re using but for trunk injections, studies have shown it is most effective when done in late May through June, according to Olson. Blue ash is one species that has shown possible resistance but there’s been debate over whether that species has some form of defense against EAB or if EAB just isn’t attacking blue ash as frequently or as aggressively as other ash species.

“In areas like Michigan and Ohio where EAB has been for quite some time, they’re looking into what they’re calling ‘lingering ash,’” Olson says. “Those are ash trees that have survived the emerald ash borer infestation and they’re trying to do research on that to understand if those survived by chance or if maybe they do have something in their genetics that’s allowing them to survive EAB.”

Manchurian ash is a species native to China that co-evolved with EAB, so the pest tends to only attack distressed or dying trees of this species. However, this species is often attacked by native borers when grown in the U.S.

“If you’ve not evolved with that pest, meaning the trees here did not have that pest ever in their history, they did not develop any kind of natural solutions to fight that pest off,” Gorden says. “And so, the end result has been that our trees don’t have the genetic capability to protect themselves from emerald ash borer.” A recent study by Canadian scientists have found that infecting emerald ash borers with the fungus Beauveria bassiana has been effective, but Olson says it will be another tool in the toolbox, just like the four types of parasitic wasps the government has released in an effort to control the EAB population.

Gorden adds that typically, these natural solutions will come in after the insect has done its worst damage and will tend to balance the population that remains and keep them in check after the fact.

“I don’t think eradication of EAB is really a viable option at this point,” Olson says. “It’s a lot more trying to control it, slow it down and give people time to react to it.”


Get the business tips, industry insights and trending news every landscaping professional needs to know in the TLC newsletter.
Read Next