EAB might sound like alphabet soup to an outsider but those in the landscaping industry know the acronym is short for the deadly invasive species, emerald ash borer.

Since its introduction to the United States in 2002, this Asian beetle has torn through ash trees starting in Michigan and has spread to 34 states so far.

Currently, there is no ash species that is resistant to EAB and five ash species were announced as critically endangered by the International Union for Conservation of Nature (IUCN) last year.

EAB has killed millions of ash trees, causing significant economic and social costs, as some urban forests are at risk to lose anywhere from 10 to 40 percent of their canopy cover without ash trees, according to the Coalition for Urban Ash Tree Conservation.

Aside from just killing trees, EAB has also been responsible for at least 14 deaths involving roads and ash trees over the past two years, according to Ron Goodger who lives in Cass County, Michigan, the Lansing State Journal reports. He took it upon himself to begin tracking these incidents after his own wife was in a wreck caused by an EAB-infected ash tree falling across her path while driving home.

So, what just is an emerald ash borer and how can you tell if your clients’ ash trees have been infected?

EAB, Agrilus planipennis, is a bright metallic green insect that is half an inch long. It can be confused for native borers like the bronze birch borer and the two-lined chestnut borer, but it is the EAB larvae that does the true damage.

These segmented, cream-colored grubs chew through ash trees’ bark and create S-shaped galleries as they chew through the phloem and cambium, cutting off the tree’s water and nutrient transportation system.

The EAB lifecycle typically takes one to two years to complete. Forty to 70 eggs are laid by females between the layers of outer bark and crevices anywhere from mid-June to August. After two weeks, the eggs hatch and the larvae tunnel into the tree and feed on the sapwood.

A majority of the time, the larvae reach maturation in September and spend the winter inside a pupation cell constructed from the tree. In April or May the following year, the mature larvae will transform into adults. The adults will emerge from D-shaped holes starting in late May and this peaks in June, but they can continue to emerge throughout the summer.

Early symptoms that indicate an infected tree include yellowing, wilting and crown dieback. A heavily infested tree will also experience extensive branch death, bark cracking and water sprouts. Other signs of EAB that can be found along the trunk are D-shaped exit holes and bark damage from woodpeckers searching for larvae.

If more than half of the canopy is dead, it is already too late and there is no treatment that can save it. It can take anywhere from a year to three years before an ash tree finally dies after being infected.

Currently, there is no silver bullet for an EAB infestation, but proactive insecticide applications have proven effective in protecting ash trees.

Imidacloprid, dinotefuran, azadirachtin and emamectin benzoate are all common active ingredients in the various insecticides used to control EAB. Emamectin benzoate can consistently provide two years’ worth of protection with a single application, while trunk injections of azadirachtin can provide one to two years of coverage, depending on the EAB pressure.

Soil applications of imidacloprid and dinotefuran have been found to be more effective when they are applied at the base of the trunk and in the spring rather than the fall.

The timing of applying these insecticides is very important, as peak egg hatch and larval establishment occur between early June and mid-August. Because the insecticides are systemic and are transported within the tree, they must be applied before the larvae have been able to successfully disrupt the tree’s phloem and xylem tissue.

Trunk injections are absorbed and distributed through the tree more quickly, taking about one to four weeks, while soil applications can take four to eight weeks and are also advantageous when the soil is excessively wet or compacted.

Basal trunk sprays are quick to apply and don’t wound the tree either, however, the sprayers must be calibrated so the proper amount of product is applied to each tree. Protective cover sprays are less common and have limited effectiveness. While intended to target the adult EAB feeding on the leaves, spray drift is common and can harm non-target organisms.

Whether insecticide applications are successful depends on using the proper management techniques as the population levels change.

According to the Bartlett Tree Experts research laboratory technical report, at the early stage of an EAB invasion, annual preventive treatments of soil applied imidacloprid is sufficient to protect ash trees.

During the peak stages of an infestation, which is around year five, EAB populations will be very high and the majority of unprotected ash trees will be killed over the next four to five years. Switching to stem injections of emamectin benzoate every other year has proven effective to protect ash trees during this phase, according to Bartlett

In the late stage where a majority of the unprotected ashes have been killed, the beetle populations will decline. Returning to an annual soil treatment of imidacloprid will be sufficient to defend the tree.

The only other option customers have when it comes to dealing with EAB is removing and replacing the threatened ash trees. The best way to decide which method is the right way to go for your customer is to use a cost calculator like the one from Purdue University to determine if it is cheaper to treat or replace an ash tree.

The response that states and communities have taken once EAB is confirmed in their area has been extreme to say the least.

Morris County in New Jersey announced a long-term tree removal program along county roads and it is estimated that more than 10,000 ash trees will be removed before the project is completed, according to the Daily Record.

City councils and parks are also having to discuss and evaluate how many ash trees they will have to remove for safety reasons, as many can pose a threat to the public depending on their location.

For Sioux Falls, South Dakota, they have gone ahead and removed every ash tree from 14 city parks and are planning to clear all the ash trees from the remaining parks as well. The city has turned to its citizens for help planting new trees with the goal of raising $2.5 million private dollars over the next five years for up to 40,000 trees, according to the Argus Leader.

The city of Plymouth, Minnesota, is even giving free trees to homeowners who remove their ash trees. The city will provide up to four free replacement trees per property every year according to Lakeshore Weekly News.

Other locations like Minneapolis, Minnesota, are already well within their removal and replace plans against EAB. According to the Southwest Journal, the Minneapolis Parks and Recreation Board is using a greater diversity of trees to counter future events that might wipe out another popular tree. The newly planted tree species include maackias, corktrees and larch trees.

Both Maryland and Virginia at one time successfully eradicated EAB in 2003 and 2004, but the beetle was eventually detected again in 2006 and 2008, respectively.

Despite the removal efforts to eliminate EAB’s food source, it is the moving of firewood and other infected tree material that has contributed to the spread of the emerald ash borer. As mentioned earlier, the larvae overwinter inside the tree, and an infected piece of firewood being taken to a new area can result in adults tunneling out in the spring and infesting nearby areas.

The USDA encourages individuals to buy it where you burn it in order to keep invasive pests from moving into new areas. Domestic quarantines are often set up forbidding the transportation of infected ash wood to help mitigate this issue.

The Animal and Plant Health Inspection Service (APHIS) has proposed to remove the domestic quarantine regulations on emerald ash borer so funding can be redirected toward the research and deployment of biological controls elements instead.

One example of a biocontrol would be a parasitic wasp that is a natural predator of the emerald ash borer. The Michigan Emerald Ash Borer Biological Control Rearing Facility is currently seeking infected green ash trees in Wisconsin in order to produce the parasitic wasps.

Yet forestry experts are against the move to remove the quarantine saying it slows the spread of EAB, allowing communities to conduct tree inventories and develop a preparedness plan. They argue that there is no evidence that switching to a biocontrol will stop or effectively slow the spread.

“Keeping the quarantine in place would help our communities have time to prepare,” Laurie Stepanek, a forest health specialist with the Nebraska Forest Service, told the Lincoln Journal Star.

Early detection is one of the greatest challenges for finding new infestations, as ash trees will exhibit few, if any, external symptoms when first infected. It is uncertain how far or how fast EAB will continue to spread, but having a plan of action in place can help you know how to properly advise your clients on what to do with their ash trees.

Below you can view a map of how EAB has spread from state to state since 2002. 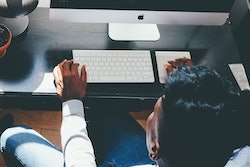 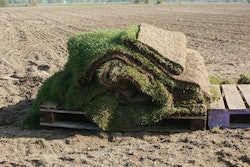 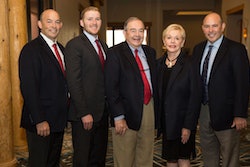