HGTV host shares how he created a lakeside oasis 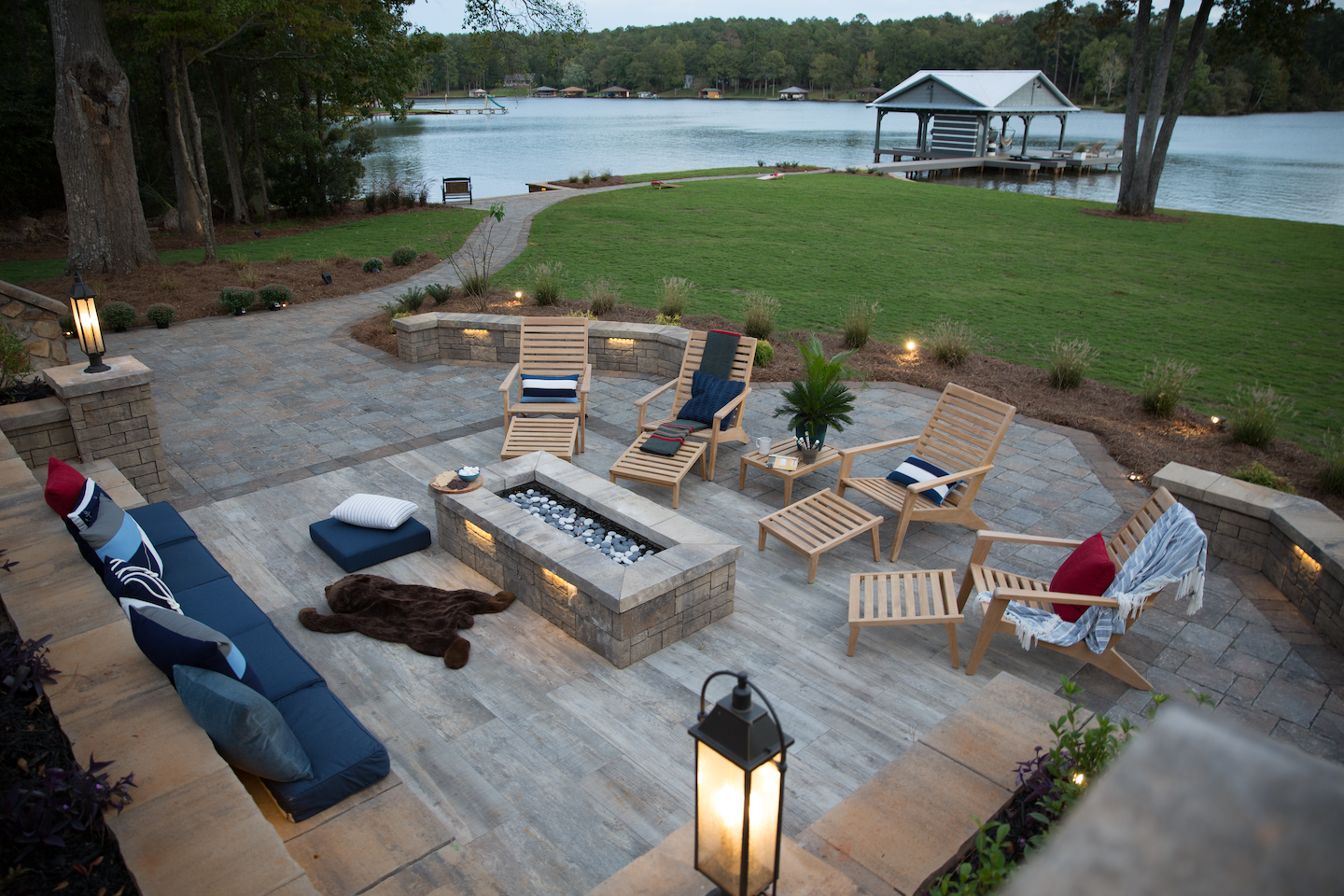 Chip Wade is the host to several HGTV shows, including Curb Appeal, Designed to Sell and Elbow Room, and while he’s no stranger to property makeovers, doing one on his own lake house is certainly different. The house dubbed “Misty Mill” was built in 1988 and is located on Lake Sinclair in Georgia. Wade says because it is a vacation home, he had to strike a balance between creating a whimsical space that was also low maintenance. He worked to include common getaway installations that would not require a lot of upkeep.

The theme of Misty Mill is “Come, Enjoy and Leave Inspired.” While Wade updated the interior of the cabin as well, he says the main focus was on outdoor living.

“I think the idea whenever I approach a project is the structure itself as long as it’s within the rough scale for a holistic project, I always look at the land,” he says. “The land is what you can’t replicate. That’s why we bought this, for the property and for the outdoor living. The house was a secondary thing and it just became a project at that point. For lake living, for retreat and getaways, it’s about finding that piece of property and making that outdoor space where you want to spend all of your time because being at the lake is about being at the water, out on the dock and out on the hardscape. It’s not about being in the house and so when we prioritized that, it makes making decisions a lot easier.” “The intent was to make it all look like it was all built at once and I think we accomplished that,” Wade says.

He used Mega-Lafitt pavers and Anglia Edger from Belgard to create the aesthetic of cut flagstone and the walkway to the boathouse also used Mega-Lafitt to make it look like the stone has aged over time. The sea wall utilized Belgard’s Mega Tandem Stone retaining wall system. Wade also took advantage of the Belgard Noon porcelain pavers that created the appearance of natural wood. When it came to replacing the 1,400 sq. ft. dock, boathouse deck and 1,000 sq. ft. deck off the main house, Wade opted to use MoistureShield Vision capped wood composite decking. The previous dock and deck had been built with pine and cedar and were deteriorating with splinter hazards.

The MoistureShield Vision eliminates the chance of splinters and also reduces maintenance and resists moisture. The brand features CoolDeck technology that reduces surface temperatures up to 35 percent.

Some of the other subtle touches Wade added to the outdoor space include a beach entry to the lake, making it far more convenient to get in the water. He also installed an outdoor shower for washing off pets or kids before they come in the house.

“Another kind of hidden feature is all the infrared heating that is built-in,” he says. “It really makes these spaces comfortable year round where they’re hard mounted, they’re electric and they’re super-efficient. Often times they’re much more high quality and thorough heating than you’d ever get out of a fireplace or fire pits, so I have those elements, but typically, those are more of the aesthetic gathering places but I don’t rely on those for actually keeping you warm. Also in the end of the day, it’s a more cost effective way of doing that, so making your fire features smaller and more attractive but supplementing with infrared heating to actually keep you and your guests warm over your dining areas and your sitting areas.” 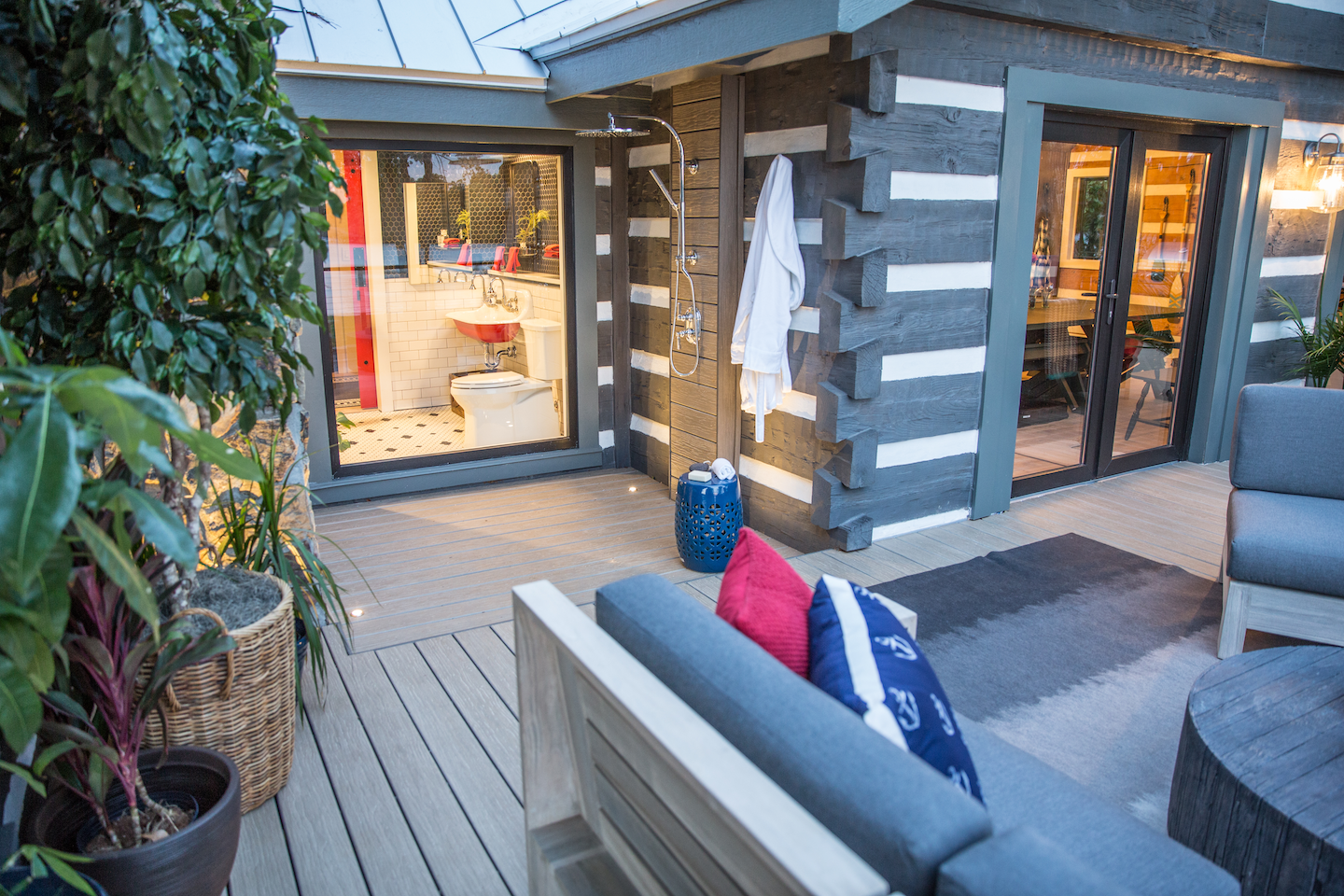 The outdoor portion of the project took two months to complete, while the entire renovation took about seven months.

Wade says the main challenge was knowing when to stop when it came to working on the outdoor section.

“It’s tempting to want to make these massive expanses, and it’s really about creating areas and environments that are close to the structure that actually creates higher quality and more manageable project sizes,” he says.

The landscape took 25 dump truck loads of dirt in order for the yard to be level, as Wade was striving to maximize the square footage of the turfgrass and hardscape in an effort to reduce maintenance. 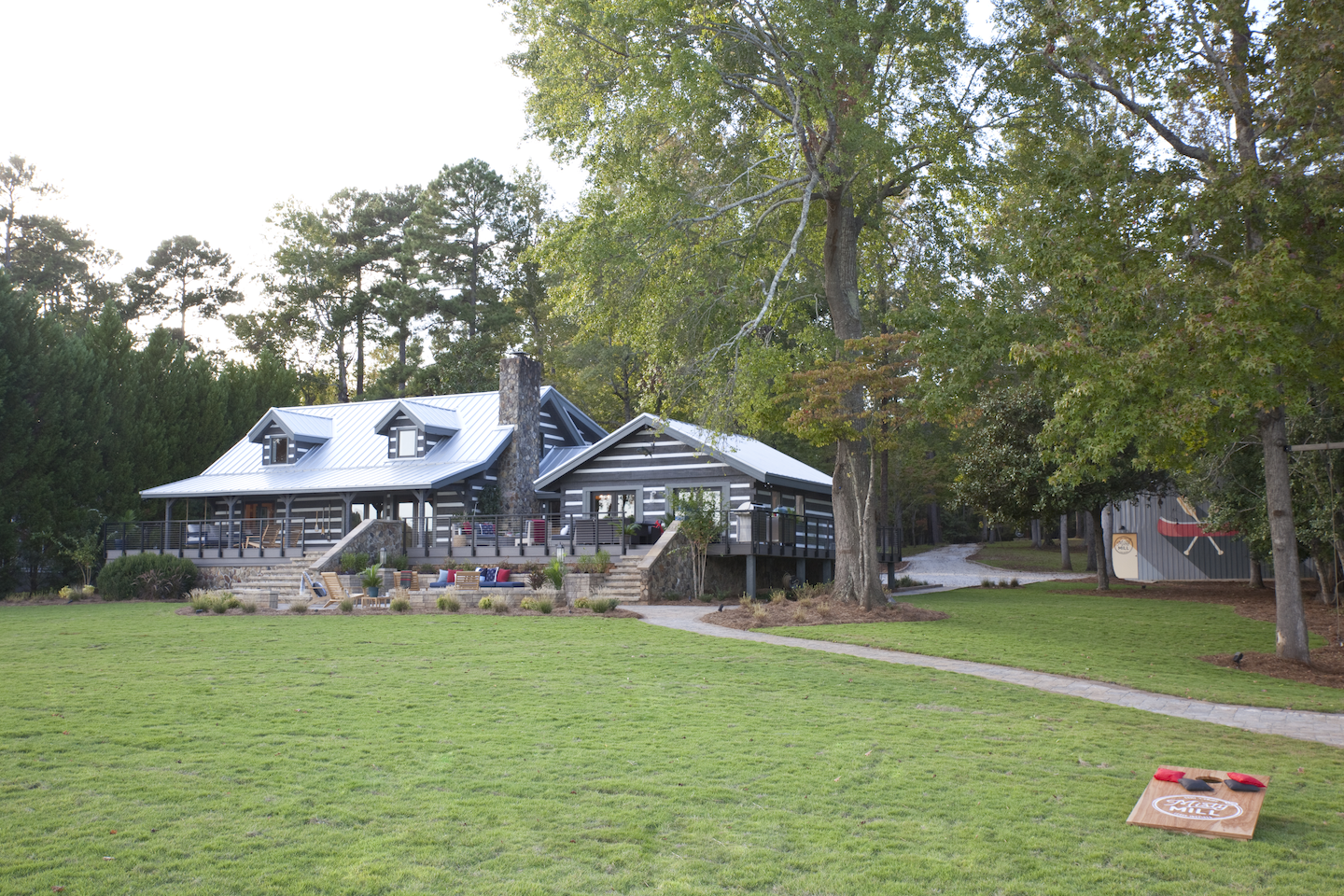 “It just makes the cost of landscape install much cheaper because I think a lot of people severely underestimate the amount of money it takes to buy plant material and then to install the plant material,” he says. “So, if you could limit that it also makes lawn maintenance less expensive and you’re at less risk of things dying and deer eating them. Down there on this property, it is just surrounded by thousands of acres of woods and the deer come in and in one night can eat up all your plant material.”

Wade says the main difference between working on a property that is his own versus someone else’s is that you tend to not use your own advice and waffle back and forth.

“I’ve done this so much that I try to really take my own advice, and it ends up making the project so much better,” he says. “You just have to fight that temptation to not make very matter-of-fact in the moment confident decisions.” 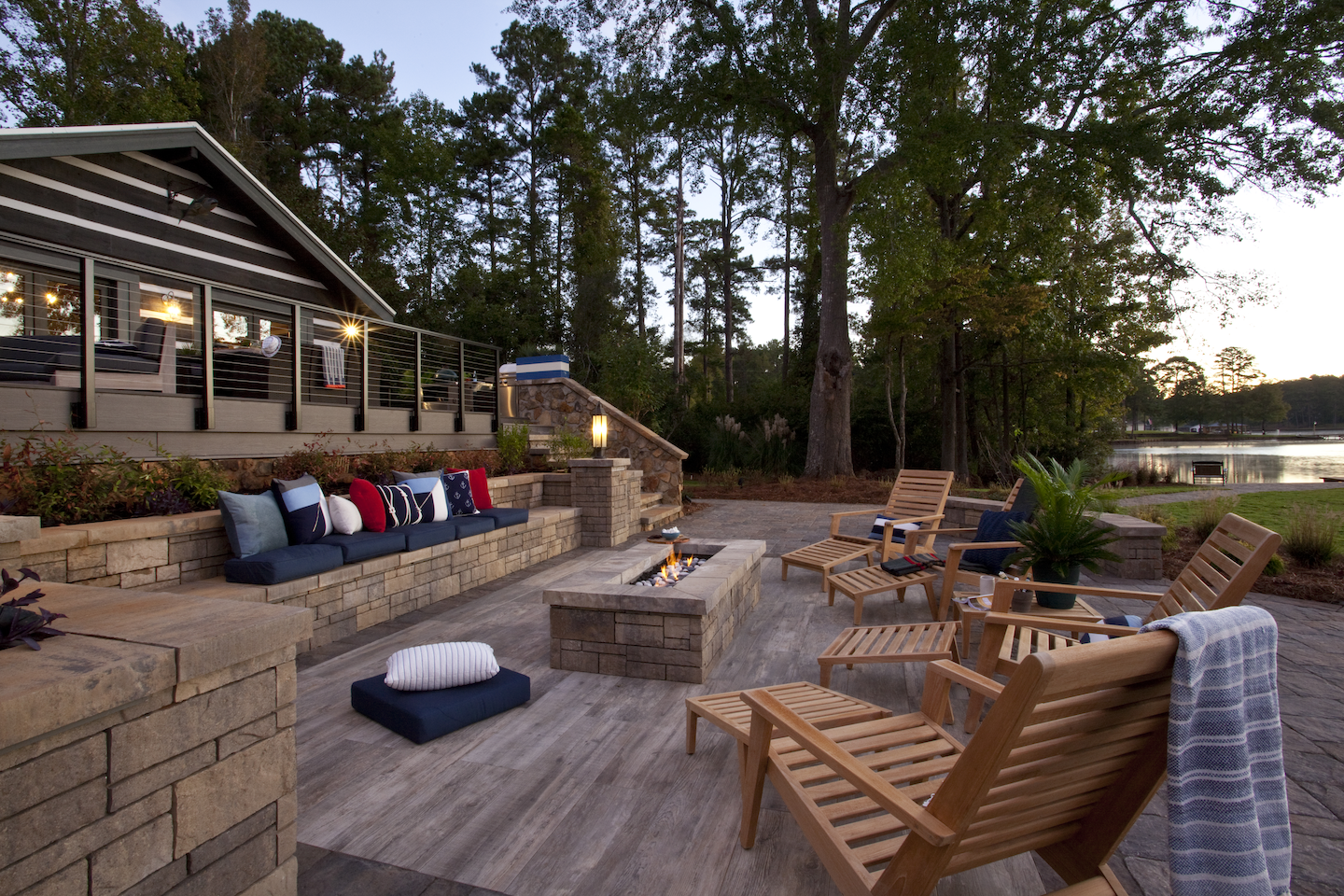 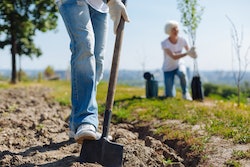 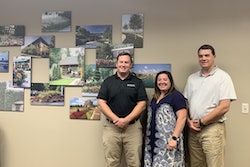 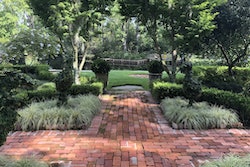 Five businesses in the green industry we profiled in 2019 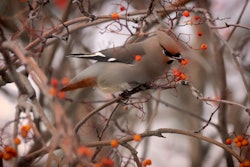 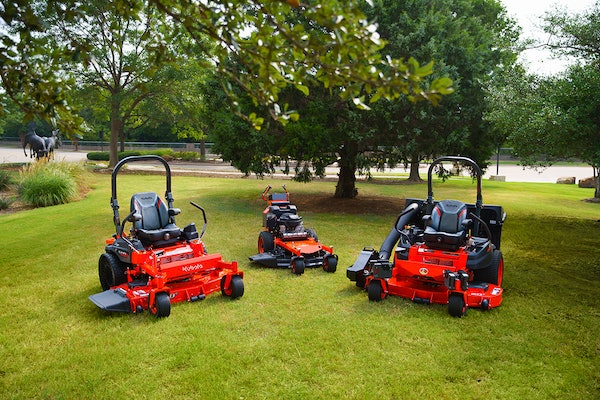 Industry roundup: Belgard Rooms aims to meet the demand for modularity and more