The adaptable chinch bug can be devastating to a variety of turfgrasses, but they are most notoriously destructive in the South, where they attack St. Augustine grass on a regular basis. Bermuda grass, bahiagrass, zoysiagrass and centipedegrass are also targets of the Southern chinch bug (Blissus insularis).

In cooler regions, the hairy chinch bug (Blissus hirtus) and the common chinch bug (Blissus luecopterus) can attack perennial ryegrass, bentgrass, fine fescues and Kentucky bluegrass. But overall, chinch bugs are easier to control culturally in these areas, and their numbers are largely kept in check by naturally occurring fungal pathogens, such as Beauvaria bassiana, which kills chinch bugs and their eggs.

Chinch bugs in the North and South have overlapping generations and can be present in turf at any given time; however, it’s during hot, dry weather that they make their presence known. You may first notice a chinch bug infestation when you see irregular patches of dead or dying turfgrass surrounded by a yellowish halo of wilted turf. Turf managers may initially confuse this damage with drought or disease, so confirm a chinch bug infestation by looking for the bugs themselves.

You can use the coffee can method to spot chinch bugs. Remove both ends of the can and insert one end of the can into the turf about 2 to 3 inches, leaving about 6 inches or so of the can above ground. Fill the can with water and wait five minutes. If you have chinch bugs, they will float to the surface. If you see five or more chinch bugs, you’ve reached a threshold that calls for control.

If you’ve never seen a chinch bug, the adults are about 1/8 to 1/6 of an inch long, have oval-shaped bodies and are black with white wings. On each wing is a triangle shape that gives adults a distinctive hourglass mark. The recently hatched nymphs molt from yellow to orange to brown before becoming black-bodied adults.

Many times you can control chinch bugs by adopting new turf management practices to promote cultural control. First, try to keep thatch to a minimum. Chinch bugs favor thatch because it provides protection for them and allows them to live just above the soil, where they are less likely to encounter disease. While chinch bugs prefer hot, dry conditions, over-watering can contribute to thatch build-up.

Next, keep an eye on fertilizer. Applying too much fertilizer not only contributes to increased thatch, but the abundance of nitrogen is attractive to chinch bugs (as well as other sap-suckers). For sunny areas of St. Augustine, this translates into no more than 3 to 4 pounds of nitrogen per 1,000 square feet per year, and even less for shady areas, at 2 pounds per year. Consider using a slow-release fertilizer.

When cultural controls aren’t effective enough, or you need quicker results (your client wants the ugly patches gone now, of course), choices for chemical controls include bifenthrin (Talstar), deltamethrin (DeltaGard) imidacloprid (Merit), lambda-cyhalothrin (Scimitar), permethrin (Astro) and trichlorfon (Dylox). If turf has a heavy thatch, use a surfactant to increase the efficacy of the chemical. Consult the label for specific instructions. Continue to monitor chinch bug populations. If you are still seeing increased populations in two weeks, make a second spot treatment to those areas. 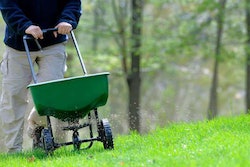 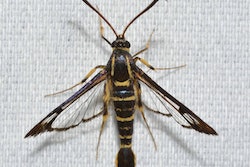 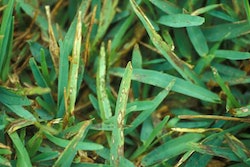 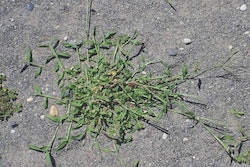