The trouble with ethanol

What you need to know about the threat of ethanol-blended fuel to your equipment.

Talk with any corn farmer, and they will probably have great things to say about ethanol.

Talk with any mechanic, and they’ll likely have few good things to say about ethanol, unless they point out the damage it causes to small engines is their job security.

First used as an engine fuel in 1826, ethyl alcohol (aka “ethanol”) has come in and out of favor. Henry Ford was in favor of it as an auto fuel, but Prohibition ended production in the 1920s. Ethanol gained favor again in 1974 when a domestic fuel shortage led Congress to pass the first pro-ethanol bill providing subsidies for each gallon of ethanol blended into gasoline.

Some lawmakers and the Corn Growers of America point out 97 percent of ethanol is produced from corn, so ethanol is domestically produced – unlike most petroleum oil we burn in the United States.

Mechanic Craig Douglass of Bob’s Power Equipment in Vestavia Hills, Alabama, holds one of the most vulnerable parts to ethanol – small engine carburetor.

“There’s a lot of information out there regarding the adverse effects of ethanol. It’s not all adverse,” says John Foster, manager of product compliance, Stihl. “Obviously, the goal is to reduce our dependency on foreign oil. In that respect, our industry is not opposed to ethanol. We’re just concerned about higher ethanol blends in engines.

“E10 has been on the market since the 80s,” Foster says. “It was problematic for all engines due to compatibility issues – primarily rubber gaskets and seals. Gasohol could dissolve those materials within a matter of weeks. But that was the ‘80s, and we’re in a different time now.”

Some environmentalists note unlike fossil fuels, corn is a rapidly renewable eco-friendly resource, and corn plants take in carbon dioxide and release oxygen. But even this positive aspect of ethanol often is debatable.

Ethanol nay-sayers say if dense forests or grasslands are cleared to grow corn, there is a net loss of oxygen and species diversity, plus more chemicals are required to maintain healthy corn.

Another adverse effect of ethanol-blended fuels is they don’t generate the same energy as gasoline, Foster says. “You’ll consume more fuel to do the same amount of work,” he says.

“By diluting the gas, even by just 10 percent with ethanol, you reduce the performance of the engine,” says Bill Lindsey, vice president of marketing for Star Brite, which manufactures a fuel additive designed to negate the ill effects of ethanol.

“It simply cannot develop as much power. This means mowers and chain saws will suddenly run at a reduced level of performance.”

If you like tracking how much work a machine can do per dollar unit of cost, experts estimate it takes 1.3 gallons of ethanol to do the work of 1 gallon of gasoline.

Another major complaint from consumers and OEMs is the solvent nature of ethanol. The term “ethanol poisoning” is sometimes used to refer to the damage it does.

“Alcohol/ethanol attacks plastic and rubber components in fuel delivery systems to varying degrees,” Lindsey says. “There is no additive that can prevent this from happening. Some components are more alcohol-resistant than others.”

Most companies are producing products today that are compatible with up to 10-percent ethanol, Foster says, but older equipment may be subject to damage.

“Rubber and plastics designed to withstand gasoline’s solvent effects are not necessarily resistant to ethanol, which is a different kind of solvent,” says Tom Bingham, director of marketing, Gold Eagle, which manufactures fuel additives. “These materials become soft and leak when they are attacked by ethanol.

“But the incidence of damage to rubber and plastic components declines every year,” he adds, “because modern fuel system components in high-quality engines have been designed to withstand these solvent effects.”

Bob’s Outdoor Power Equipment in Vestavia Hills, Alabama, has been selling and servicing all types of landscape equipment for 25 years. Owner, Daryl Carr, estimates 90 percent of the repair problems that come into his shop are gas-related issues. Ethanol is frequently the suspected culprit.

“On a two-stroke, it’s more of an issue than with a four-stroke engine,” he says. “In the smaller two-strokes, you’ve got flexible diaphragms pumping the fuel. When a diaphragm hardens up with ethanol, it doesn’t do its job.”

One of the biggest problems with ethanol is it is hydrophilic – it attracts water. The longer ethanol sits in your tanks, the more moisture it absorbs out of the atmosphere.

Most experts say after two months of sitting idle, the E10 fuel in a chainsaw, trimmer or other small engine will likely be too wet to start.

“Water and ethanol form a tight chemical bond,” Lindsey says. “If the water content of fuel exceeds 5 percent by volume, the water/ethanol mixture falls to the bottom of the tank, forming a distinct layer. This is phase separation. The gasoline will now have a reduced octane level and the engine won’t run on the water/ethanol mixture. Because most lawn equipment has a vented fuel tank, moisture cannot be prevented from being drawn into the tank.”

“If you have fuel stored for long periods – say more than 60 days – it could attract enough moisture to cause phase separation where gas, water and ethanol all separate,” Foster says. “If that goes into your engine without mixing completely, it can cause serious problems for your engine.”

Many moisture issues are caused by poor fuel handling (not sealing gas cans, for example) on the part of the equipment owner or gas station owner, Bingham says. This allows water vapor in the air, rain and even groundwater to enter the gas can or tank. Gasoline engines used in coastal areas, lake regions and the Southeast are more prone to problems due to high humidity.

Automotive fuel systems are better equipped to handle wet fuel. But water in the fuel will cause cavitation in the cylinders — microscopic pitting of the cylinder walls as water superheats and explodes against the metal.

In two-stroke engines, water in the fuel crowds out lubricating oil on the cylinder walls leading to excess friction and premature wear.

When water meets metal, there are inevitably corrosion issues as well.

Quality additives contain metal corrosion inhibitors to prevent this. “It can cost less than 10 cents per gallon to protect engines from this damage,” Bingham says. “It can easily cost $75 to $150 to rebuild or replace a small engine carburetor. Obviously, the price goes up when the damaged engine is in a vehicle.”

Ethanol also indirectly plays a role in the plugging of fuel passages and filters, which happens when it washes deposits off of fuel system components. “This is really not the ‘fault’ of ethanol,” Bingham says. “It is an excellent cleaner. If your fuel system is not maintained and clean, you could face this issue with the switch to ethanol blended fuel.”

Quality ethanol treatment additives, he adds, include fuel injector and carburetor cleaner to break down these deposits and move them through the engine without causing damage.

“Ethanol is like a solvent, so as soon as it went into all this equipment that never had it, it started to remove these deposits and flush them out. If it’s a carbureted engine with small jets, it has a tendency not to work well.”

Carr believes varnish build-up is also a problem for new equipment. “Emission controls are tighter and the carburetors have tighter specs, so it’s easier to clog up a new engine versus an old engine.”

Some fuel experts believe the blending of gasoline and ethanol is not always as precise. Even if the pump reads E10, you may be getting 5 percent ethanol or 15 percent.

“Ethanol and gasoline cannot form a chemical bond,” Lindsey says. “This is why ethanol is added to the gas when the fuel is delivered to the gas station. Ethanol-blended gas begins to degrade in as soon as four weeks, and as the light ends evaporate], it leaves gums and other solids behind.”

“Fuel companies mix in bulk,” says Howard Rose, one of Carr’s mechanics with 57 years of experience. “It can easily be 20 to 25 percent ethanol – accidentally of course.”

Rose said he had one case where a golf course superintendent suspected equipment damage due to ethanol. A test revealed the gas they were using was 40-percent ethanol.

If you buy new two- or four-stroke equipment, talk to your dealer about the proper additives to negate the effects of ethanol. Many small engine shops sell a simple test kit for checking the ethanol content of gas.

Carr says his mechanics automatically replace the gas in every equipment tune-up or repair. “In defense of ethanol issues, we’re putting an ethanol treatment in all gas we use to service equipment to try to prevent some of the come-backs,” he says.

While some people believe higher octane gas will counter the effects of ethanol, Rose says there is little truth to that. “That’s probably a waste of money,” he says. “Higher octane causes the gas in the cylinder to burn more gradually, and if it doesn’t burn completely before the ports open, it can cause the engine to run hot.”

Before storing equipment, Foster suggests removing fuel from the tank and running the engine until it is out of gas. He also recommends using a treatment designed to stabilize fuel, treat water, increase combustibility and remove and prevent carbon and gum deposits.

“Most ethanol issues come from fuel stored too long and/or ethanol in an older engine for the first time,” Foster says. “If a carburetor cleaning or replacement becomes necessary, it can be costly to the consumer.”

“By buying fuel from a reputable source, properly using approved containers with good closures and by using a high-quality ethanol treatment additive, ethanol blended fuels will cause no issues,” Bingham says. 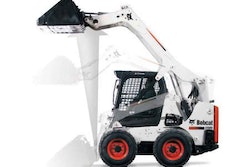 Which loader lift option is best for you? 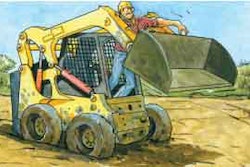 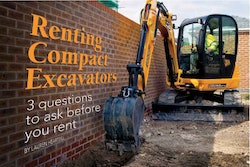 Three questions to ask before renting a compact excavators 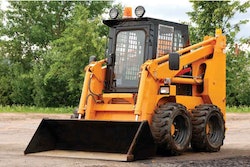 How to get the most from the sale of used equipment