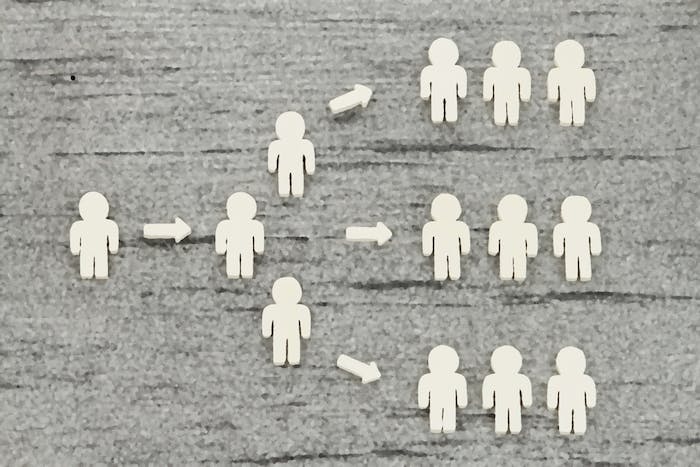 If you currently have a group of stellar employees in your company, wouldn’t you want to find new hires that share similar values and qualities?

Finding this particular type of employee might not be as difficult as once thought; it just comes down to knowing where to look and who does the looking.

According to Jason New, founding principal with McFarland Stanford, and Chris Psencik, principle and vice president of McFarlin Stanford, finding new hires that share similar values and qualities is as easy as one, two, three.

“We have a great and talented team members but we wanted to get more just like them,” says New. “Instead of looking for people ourselves, we found that having the employees bring in people in their inner circle was much more successful.”

For the team at McFarlin Stanford, utilizing what they’ve dubbed the one, two, three referral program has been one of the best methods for bringing in their ideal employees.

When a current employee brings in a referral that is hired and stays for a week, the employee that brought in the referral gest $100. After three months, that employee is then given $200, and after six months, they are given $300. In total, employees can earn up to $600 for brining on that new team member.

“It’s been proven that if someone’s been with you for six months, they’re a team member that’s going to stay for the long term,” says New.

New says they found this method was the best use of their funds, and he hopes it gets team members excited about making extra money, as well as being able to bring in reliable contacts.

“What we’ve found is a healthy culture is a culture of people who are comfortable referring their friends and families to work here,” says Psencik. “If you see that in your business, that’s when you know you’re having a positive influence on the culture in the organization as a whole.”

When presenting employees with their referral reward, New recommends making it a big deal. He also says to make sure you are giving the employee a solid amount that is theirs to keep, as opposed to an amount that will still need taxes taken out.

“Net the taxes up and present it to them during a training day or something,” says New. “Thank the employee and show the other team members what they could also be earning by bringing in reliable people. That’s something everybody can see and get behind, and you can generate some excitement around it.”

We all know that company culture is important for current employees, but when is it an appropriate time in your hiring process to try and create an alignment with a potential hire and your company culture?

According to Psencik, that alignment needs to start the first time you meet or interact with them.

“The first impression of you and your company starts in that first call, follow up email, first interview, etc.,” says Psencik. “You need to make a good impression by doing all of these things in a timely fashion.”

He says even if it’s something as simple as following up with a candidate after your first call or email with them, creating that culture of accountability and following up is vital. He also stresses the importance of not moving a timeline on a scheduled meeting.

“If it’s my first meeting with a candidate, the last thing I’m going to do is move or bump that meeting because my schedule is ‘too busy’ and I ‘just can’t find time to meet with you today,’” says Psencik. “That’s introducing bad behavior into your culture, and that’s the last thing we want to do.”

New notes that they also like to have multiple team members present in interviews with potential hires, as this allows candidates to hear what these team members have been able to accomplish in their careers while working there.

"When you have all of these different voices in the room, you have more people representing your company culture,” says New. “The culture becomes everyone being excited to be able to speak highly of what the company’s doing and how they’ve come together to make it happen.”

Being able to interact with teammates is a vital aspect of keeping up a thriving company culture, but with the distancing limitations brought on by Covid-19, typical methods are being rethought.

Psencik notes that since we are part of the green industry, the positive aspect is that most, if not all, of your employees enjoy being outside. He says that service properties offer teams the opportunity to engage with the property and customer, but also to see what your company is about.

According to Psencik, now is the ideal time to get your office workers out and conduct a meeting on a project site. Or instead of having one-on-one meetings with managers in your office, meet with them outside for a change of scenery.

“Engage in what we get the joy of doing on a daily basis,” says Psencik. “Even from an interview standpoint, there’s no reason why you can’t still be interviewing. Change the form and fashion of where you meet, how you meet and what that meeting looks like to make sure everyone’s comfortable with it.”

New says there’s still a way to keep your company traditions up, such as events, without sacrificing safety. You just have to be willing to change up your methods and follow appropriate guidelines to make everyone comfortable.

As a small business, you might find it difficult to convey the vision you have for your company without that process getting lost in the day-to-day struggles.

In Psencik’s opinion, he believes small businesses actually have the advantage for this. Psencik says in his experience, small business owners typically are the ones that have their boots on the ground, they know their employees well, they interact with them regularly and they are engaged in the daily aspects of physical work.

“It’s about explaining the vision but also have a little bit of metrics to back up the direction you want to go,” says Psencik. “When you talk about vision, you talk about opportunity. If I’m a $2 million business and I want to be a $10 million business in 10 years, realistically we’re looking at putting on roughly $1 million worth of growth every year. That’s $8 million more dollars of work over the next eight years, and that’s a lot of opportunity for growth.”

“Talk to your team about where the company is going and where they want to be,” says New. “It’s about inclusivity. Work together on that dream and that vision of where you’re going.”

EDITOR’S NOTE:  This information was presented in a webinar during NALP's LANDSCAPES 2020 event.