A landscaping worker was running errands on a Saturday when his supervisor called to ask if he could help with a maintenance job the company was supposed to have completed the previous week. Since it was his day off, the worker didn’t have his steel-toed boots or eye and ear protection with him. But he was in the vicinity of the property and could use the overtime pay, so he drove to the site. Soon, he was operating a walk-behind lawnmower on a corporate campus. When the bottom of a chain-link fence snagged the front of the mower, the worker jerked the machine toward him to free it. The lawnmower pitched back suddenly, running over the man’s feet. The blade sliced through one of his tennis shoes, mangling three toes that were later amputated.

What the expert says

The average lawnmower blade spins at 160 mph, says Wilson Bateman, owner of occupational safety training company Global Training Edge. “If your foot goes under there, obviously it’s going to do some severe damage.”

According to a study published in the Annals of Emergency Medicine, 74,000 lawnmower injuries are treated in American emergency rooms each year.

To prevent becoming a victim, you should wear pants, steel-toed boots, goggles and hearing protection when operating a lawnmower and when in an area where someone else is using one. Even if they’re wearing the proper protective gear, make sure others stay at least 50 feet from you while you’re mowing. Before cutting the grass, inspect the yard for rocks, sticks and debris that could become projectiles when caught up in a lawnmower’s blade.

Also, make sure all guards are in place and no safety mechanisms, such as those designed to automatically shut off the machine, have been disconnected. Every jobsite should have a designated fueling area, Bateman says. Let the lawnmower engine cool completely before refueling. Never attempt to unclog the mower deck with your hands or feet. Instead, turn the lawnmower off and use an instrument to clear the material. Stored energy could be trapped in the blade mechanism, causing the blade to spin rapidly even with the machine off.

If you’re asked to operate a type of lawnmower with which you’re unfamiliar, someone who has used the equipment before should explain proper operation and possible hazards. You can also ask to see the operating manual. 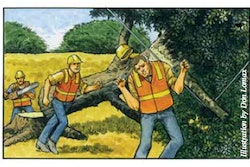 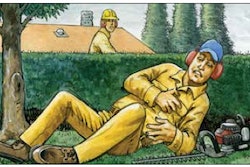 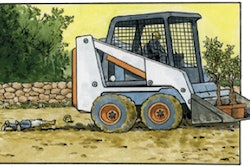 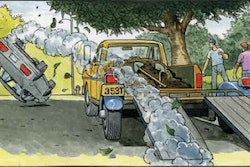