The accident: A landscape company employee using a blower to clear leaves and grass clippings from the curb of a busy roadway turned his back to oncoming traffic, which was approaching around a blind corner.

In order to clear debris from the street, located in an upscale area, the man had to stand in the road. No signs were posted alerting drivers to the presence of workers. The employee was wearing earplugs and did not hear a fast-moving vehicle, which struck him, knocking him out of his shoes. Both the man’s legs were broken and he underwent surgery. He has not returned to work.

What the expert says: When blowing, edging or mowing along a roadway, always face the direction of traffic, urges Nick Reynolds, risk control manager for WS Pharr.

Other common mistakes workers make are not posting warning signs for oncoming motorists (orange cones aren’t enough) and not wearing a high-visibility, reflective vest made of fluorescent orange or yellow material. This personal protective equipment makes a worker visible from at least 1,000 feet, Reynolds says.

You should also be aware of the visibility limitations and “blind spots” at each jobsite. If, like the example worker, you must stand in the road and vehicles are approaching around a blind corner, ask a fellow worker to stand where he or she can see oncoming traffic and alert you to get out of the way.

Assuming drivers will make responsible moves is another common mistake, Reynolds says. “They [workers] get complacent, thinking ‘The driver is going to see me and make the necessary correction,'” he says. “It’s not always the case.”

From 2011 to 2015, 609 workers were killed from injuries at road work zones in the United States, according to the U.S. Department of Labor. Drivers often are at fault in these accidents, so even when you’re taking the proper precautions, being alert and focused on your work and oncoming vehicles is vital.

As with any job, scout the area beforehand for hazards such as slippery slopes and objects that could become projectiles. This is especially important when working near roadways since flying debris could strike vehicles, causing property damage or injury – and possibly a lawsuit for your employer. Angle equipment such as line trimmers and lawn mowers so they don’t shoot material toward traffic. 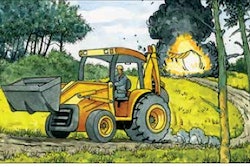 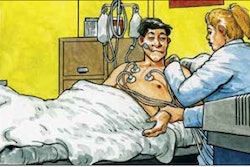 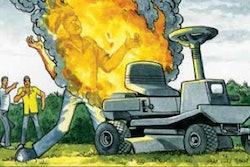 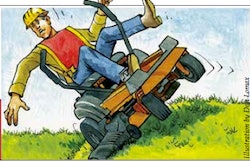