The accident: A 56-year-old landscaper is operating a ride-on mower on the steep slope around an apartment complex in South Florida when he drives too close to the edge of the canal behind the apartments. He loses control of the mower, and it careens into the canal. Nearby co-workers see the accident and rush to the water, where they find the operator pinned beneath the mower in the canal.

The crew frantically tries to pull the mower off the man, but they are unsuccessful. Rescuers arrive too late.

The bottom line: Mower accidents result in more than 55,000 injuries annually, and some 75 people die from their injuries, according to the American Orthopedic and Foot Society. A large portion of the injuries involve loss of toes or part of the foot. Most mower accidents occur on slopes when the ground is damp or there is poor visibility. Take extra precautions around bodies of water. Here are other basic safe operating tips for riding mowers:

• Before operating equipment, make sure it is in good working order.

• Do not allow other people in the area when operating a mower.

• Remove potential projectiles such as rocks, metal and branches from the area.

• Fill the gas tank while the engine is off.

• When a lawn mower turns off, be extra careful in removing any objects from the blade since stored energy could cause it to spin rapidly.

• If you cannot back up the slope or if you feel uneasy on it, do not mow it with a ride-on machine.

• Mow up and down slopes, not across.

• Watch for holes, ruts, bumps, rocks or other hidden objects. Uneven terrain could overturn the machine.

• Choose a low ground speed so you will not have to stop or shift while on a slope.

• Do not mow on wet or damp grass. Tires may lose traction.

• Always keep the machine in gear when going down slopes. Do not shift to neutral and coast downhill.

• Avoid starting, stopping or turning on a slope.

• Keep all movement on slopes slow and gradual.

• Use extra care while operating the machine with grass catchers or other attachments; they can affect the stability of the machine. Do not use them on steep slopes.

• Do not try to stabilize the machine by putting your foot on the ground.

• Do not mow near drop-offs, ditches or embankments. 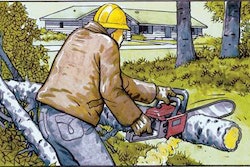 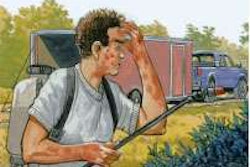 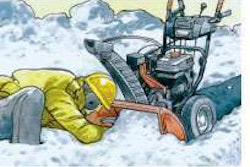 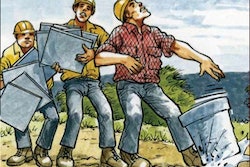