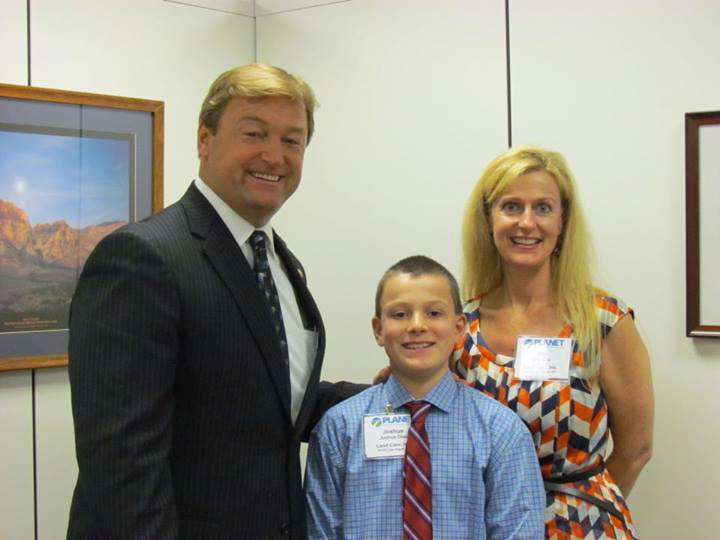 Joy Diaz of Land Care of Nevada and her son Joshua with Senator Dean Heller (R-NV).

As part of PLANET’s Legislative Day on the Hill, organizations, companies and landscapers stormed the Hill to talk to representatives about several green industry issues.

More than 193 people met with legislators or staff from 25 states, which was a 60 percent increase from the year before, according to PLANET.

Some issues that were discussed include, NPDES permits, H-2B and Lyme disease.

The Department of Labor (DOL) is currently in the process of notifying current H-2B employees of the application of new, higher prevailing wages. Employers have the opportunity to seek reconsideration of the new prevailing wage followed by the opportunity to appeal it administratively to the Board of Alien Labor Certification Appeals (BALCA). Some PLANET members that use the H-2B program have already received new prevailing wage determinations under the interim final rule issued on April 24 by the DOL and Department of Homeland Security (DHS). According to the DOL, the new wages must be paid upon receipt of this notification.

While the DOL has not clearly outlined its policy, our general understanding, based on information reported by some congressional offices, is that a company may not need to pay the new wage rate pending the outcome of its request to the DOL for reconsideration of the wage or, following that, its appeal to the BALCA. If the appeal is unsuccessful, then the company will be required to pay the wage differential retroactively.

For those needing more information, PLANET members work with their human resources officer, H-2B provider, or legal counsel to determine their best course of action in response to notification of the new wage rates. Note: It’s important to carefully read the letter and follow the instructions contained in it. If an employer doesn’t ask for reconsideration, he or she must begin paying the new wage immediately.

In the meantime, PLANET is actively lobbying the federal government to provide our members with relief from these massive increases in labor costs. PLANET worked to have fair H-2B wage language included in the comprehensive immigration reform bill that passed the Senate last month (S. 744). In addition, Reps. Robert J. Wittman (R-Va.) and Rodney Alexander (R-La.) recently introduced the “Save Our Seasons Act of 2013” (H.R. 2765). This legislation, which is similar to the wage language included in the Senate immigration bill, would require the DOL to calculate prevailing wages using a methodology similar to the one it had been using until the DOL and DHS finalized their new rule on April 24.

PLANET needs help to encourage Congress to place additional pressure on the DOL and DHS to rescind their interim final H-2B wage rule.