If anything, ConExpo has been the first construction trade show in a decade where Tier 4 Interim and Tier 4 Final are no longer news.

Engine emissions controls are a done deal. Now manufacturers are moving aggressively to improve the fuel and power efficiency of components outside the engine envelope.

These contributions also reduce carbon dioxide and other pollutants and will likely play a key role in the next round of regulatory requirements, what some people are already calling Tier 5.

Case in point is the Cummins CorePlus motor-generator.

It’s a component for fuel-burning trucks and equipment that provides similar benefits to vehicles with electric hybrid systems.

The CorePlus is still in development and testing, but could rapidly become the kind of device that defines the next generation of trucks and machinery.

This innocuous device, measuring about 18 inches in diameter and 10 inches thick, fits between the engine flywheel and transmission on a truck or off-road vehicle and can provide electric power for the machine driveline or accessories, ramp up torque in high load situations and even power certain types of hydraulic pumps.

Cummins says the device could be retrofitted and could be used in trucks and equipment, both on and off-road.

The system consists of the CorePlus and a battery pack that would need to be mounted either under a chassis or in a truck bed.

By integrating between the engine and transmission, it can take in energy output from the flywheel, add it to the total power output or shuttle it off to storage in a variety of different battery technologies.

Then when needed, the stored energy can be routed back through the CorePlus to the driveline or accessories. It can also be configured to absorb energy out of transmission and braking systems.

The CorePlus model featured here can generate up to 90 kilowatts of power for immediate use or storage. There is also a smaller, thinner version that can also serve as an integrated starter/generator with the potential of eliminating the engine alternator and powering components like the alternator that run off the engine’s serpentine belt.

Cummins says the CorePlus could also be used to power hydraulic fluid in a machine, but at present there aren’t enough manufacturers making hydraulic systems that run on electrical power to make this an application for the immediate future. 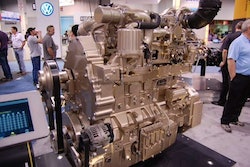 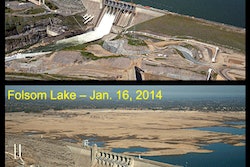 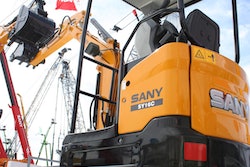 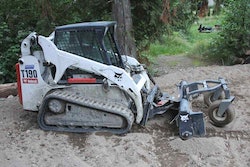