Spend about two minutes scrolling on Facebook and you’re most likely going to see about 10 or more videos – many of them from businesses. This isn’t just some fluke; this is where the industry is headed. Video is on the rise and it is time to see if video marketing is something your landscaping company needs.

According to Cisco’s 2014 Visual Networking Index, video makes up 64 percent of all Internet traffic and is expected to make up 80 percent of that traffic by 2019.

One landscaping company, Granger Landscapes, based in Florence, South Carolina, has recently added video to its marketing plan. It has worked with Meade Agency for two years now and was originally using them to shoot photos, but then requested that they produce some video as well.

Meade Agency has done several videos for the landscaping company over the past few months. In addition to an introductory video, the agency produced one that showed Granger Landscapes working on a project in Summerville, South Carolina – a way of letting people know the company has expanded its reach.

“Everybody in Florence knows who Granger Landscapes is,” said Whitney Meade, director of communications at Meade Agency. “It’s just they’re the best in town.

The introductory video about Granger Landscapes has more than 2,000 views on Facebook thus far.

“We have gotten a lot of great feedback from what we have posted,” said Brandon Granger, owner of Granger Landscapes, “and even just in conversations, I have had people bring up seeing it and really liking it.”

Granger sees video marketing as a great way to show people what his company is doing and what it’s capable of. He expects to start back hard with more videos in the spring.

“I would certainly suggest it for others,” he said. “It’s a great way to reach people, and a better way to market yourself and for them to put a face with the company.

“I think people are more keen to do business with someone that they feel comfortable with, and if they have already seen me online or have followed our story, they may have already made that connection.”

Meade has several pieces of advice for landscapers who are thinking about adding video to their websites, Facebook pages or YouTube channels. First, she says, develop a relationship with a company that can produce quality video.

“A lot of people think that they can just shoot with their iPhone and upload it to Facebook,” Meade said. “People will tolerate a poor video quality, but they will not tolerate poor audio quality. That’s where a professional is going to come into play, in giving you professional audio with microphones and sound mixing during post-production. That’s going to give the polished look of how your company wants to come across, which is professional.”

Choosing to shoot the videos yourself is not where you need to be cutting corners, Meade says, even if your company is small. She suggests doing only what you can afford to have done professionally, even if that’s only one video a quarter.

This isn’t to say you can’t post your video on YouTube – far from it. You want to have your video on as many sites that are linked to your website as possible, as this improves your chances of ranking better on Google.

Videos are considered “sticky” content because they tend to keep visitors on the site longer, which is another ranking factor.

However, keep in mind that if your website isn’t already optimized for search engines, adding video isn’t going to help much with rankings.

When choosing to make a video, it is important to remember to keep them short and make sure they tell a story.

According to Meade, people are looking to develop relationships and videos are the best way to do relationship marketing.

When Meade Agency is making a video, they focus on providing professional audio, dynamic video showing the company in action, and music that matches the company’s personality and the audience they are trying to target.

While some companies may be hesitant to invest in video marketing, Meade says video is an obvious choice for landscapers.

“Video correlates so well with what they do,” she said. “They’re truly doing art with landscaping. Landscaping is such a visual medium that video is going to be able to tell the story so much better than pictures can.”

GrangerLandscapes_2minPromo_master1080p from Granger Landscapes on Vimeo. 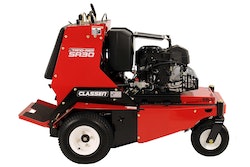 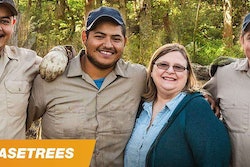 Case CE wants to plant a tree for your landscaping company 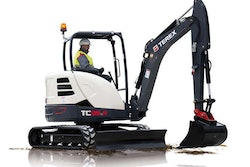