Mulch is a material familiar to virtually all landscapers, and for good reason: Its practical benefits, such as maintaining soil temperatures and conserving water, are complemented by its visual potential – mulch can create an aesthetically unified landscape.

Yet, there is no one ultimate mulch, so there are a number of factors to consider when selecting which type and how much to use.

Depending on what type of plants are being mulched, the amount needed varies. Roses need about 2 inches of mulch while fruit trees need 3 to 4 inches. No plant should have more than 4 inches of mulch, as this often leads to them suffocating and becoming dehydrated.

A layer of at least 1 inch needs to be applied in order to effectively prevent weeds from growing. The drainage of the site also changes the amount of mulch needed. If the area drains poorly, keep the mulch to 2 inches at most.

The most common mistake with mulching is the ever-despised “mulch volcano” that continues to persist in landscapes despite the many rants and informational pieces written online. To keep it brief, this is when about 1 to 2 feet of mulch is piled up around the base of a tree or a plant.

This creates a habitat for rodents and fungi to take hold, while slowly killing the tree by storing excessive heat and starving the roots of oxygen. Mulch should be kept away from the base of the tree (where the trunk meets the ground) by at least 3 inches.

No matter how many other people are out there making mulch volcanos, it doesn’t make it correct.

Mulches can be broken down by whether they are organic or inorganic. Organic mulches tend to decompose in a season or two and are able to improve the soil. Materials such as straw, lawn clippings, leaf mold, and compost all break down in a season or less.

When looking for the gold standard of mulch – that is, which one is going to make the greatest contribution to the soil – it’s going to be compost, but it is important the compost has been made from optimal ingredients.

Straw is relatively cheap and is good for bulb beds, vegetable gardens and strawberry plantings, in part because it is lighter than some mulches. However, this material comes with some real issues. To name two: it’s flammable and contains grain seeds that can germinate.

Bark chunks, cocoa shells, wood chips, and pine needles are longer-lasting organic mulch choices. Bark chunks are readily available and resist both compaction and being blown away by the wind. However, bark can be toxic to young plants if it is too fresh or has been stockpiled improperly.

Cocoa shells are a favorite for their textured appearance and sweet smell. They’re expensive, though, and can be hard to acquire depending on what region of the country you are in. Another downside is that cocoa hulls are toxic to dogs if ingested.

Inorganic materials such as gravel, volcanic rock, and glass stones typically are considered a permanent part of the landscape so they don’t have to be replaced like organic materials. However, they do not improve the soil.

Unlike wood chips that pull nitrogen from the soil, inorganic materials like stones are not taking nutrients away from the plants or harboring diseases. In order to remain attractive, they do require meticulous cleaning.

Opting to use landscaping fabric is about as hotly debated as using rubber mulch, but it can be used to keep stone mulches from migrating down into the soil over time.

Once you’ve determined the correct amount and type of mulch for a landscape, it is time to actually apply it. The best way to ensure the mulch is able to keep beds weed-free is by starting with a clean bed.

Putting down mulch should be done after ensuring the weeds in the soil have been eliminated to the best of your ability, either by using chemicals or manually pulling them up.

By layering newspaper over the soil before mulching, sunlight is blocked, accomplishing the same effect as landscaping fabric but the newspaper will eventually decompose. This helps the mulch suppress the weeds for much longer.

Spread the material evenly and replenish throughout the growing season as needed. 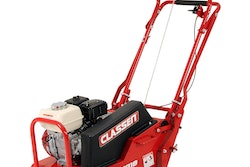 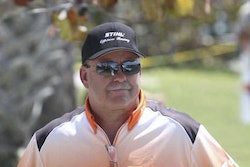 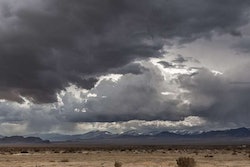 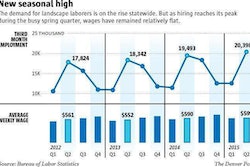