Landscape fabric is often a maligned material due to previous bad experiences, but Jobe’s is here to set the record straight of how this product should be used and the benefits it can provide.

The main complaint landscapers tend to have against landscape fabric is that it doesn’t stop all weed growth, yet Kim Kemper, vice president of marketing with Jobe’s, says that the fabric can only retard or reduce weed growth.

“No landscape fabric is going to 100 percent eliminate weeds,” she says. “That’s a fallacy, total and complete. That’s why I think people get disappointed. It’s like, ‘Oh, this is supposed to completely stop the weeds,’ but nope, it’s not.”

Additionally, landscape fabric can be used for more than just weed control. Check out the pros and cons below and how to go about properly using this material.

As mentioned before, the main benefit of landscape fabric is its ability to retard weed growth. This helps reduce the need for herbicides. Landscape fabrics work best in garden beds that are meant to be more permanent like one for shrubs rather than those for vegetables or annuals, which will be dug up often.

Kemper adds that it also helps control the temperature of the soil, keeping it moist and cool in the summer and warmer in the winter.

Landscape fabric can also be helpful in hardscaping installations.

“Landscape fabric, the right kind, is a great stabilizer for the soil to help prevent the erosion of that fill sand or fill dirt or whatever you’re putting in between your pavers as you’re setting that together from that washing away and eroding way that stability,” Kemper says.

Another popular use for landscape fabric is for erosion control on slopes, as they can prevent washouts from heavy rains. Kemper says Jobe’s fabrics are frequently used in California for that purpose.

One of the major drawbacks cited about landscape fabric is that it prevents nutrients from reaching the soil, which can cause it to become unhealthy in turn.

“In our WeedBlock and our PowerGrid, we have patented micro funnel technology and a pattern that is in the fabric,” Kemper says. “It is actually worked into the fabric itself that helps with that water flow pulling the water down and into the soil, and the airflow and that temperature control. Those are patents that we hold only on those fabrics.”

Another issue is the fact that weed seeds can end up growing in the mulch placed on top of the fabric, defeating the purpose of the fabric entirely. Also, for those who wish to change out their garden beds regularly, the puncturing of the material to add new plants can cause it to be less effective over time.

Kemper says many of the problems landscapers experience can result from getting the wrong fabric for the job.

“If you’ll really look at the project you’re doing and work to match your fabric to your project, you’ll be a whole lot happier,” she says. “Both in the amount of money you spend and the results that you get.”

Using the right material for the job

To avoid having a bad experience with landscape fabric, Kemper stresses the importance of doing proper research first.

“Understand what kind of job they’re doing so they understand what type of fabric they need,” she says. “Because that’s probably the biggest problem right there right off the bat.”

Lighter weight fabrics, like Jobe’s WeedBlock or PowerGrid, are better for when working in a seasonal bed. Jobe’s also has WeedBlock Natural, which is made out of corn and will biodegrade over time. It is important to cover these lighter weight fabrics with a light covering of mulch, as they aren’t as UV durable as some of the heavier materials.

To keep lightweight fabrics in place, landscapers can use a fabric peg every three feet.

Meanwhile, if you were working on creating a sidewalk or a project with river rock, Kemper advises using a heavy-duty or woven fabric that will be able to hold and stand up to the weight that they’ll experience.

“I think they think that it’s all the same kind of fabric, I really do,” Kemper says. “And so, then they’re disappointed when they picked the cheapest one, which is going to be one of the films, and they’re doing a high-end installation of a path or putting in river rocks or chipped granite into a bed and that fabric just comes to pieces.”

Heavier fabrics are held in place by fabric staples. Longer staples should be used when working in sandy soils.

The grade of the fabric and how well it is installed and maintained will the determine of the lifespan of the material.

“The lower-end film, if they install it properly and they keep it covered with mulch, because that has a lower UV resistance than the heavier weight fabrics, it should last at least a couple of seasons,” Kemper says. 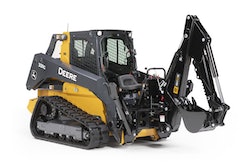 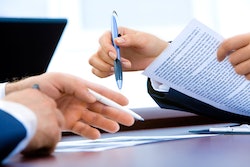 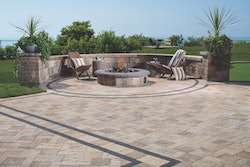 Build with creativity: Trends in paver design that foster form, function and style 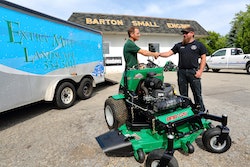